I have a few splash effects (cannonball ones) that all have a sound actuator. I hit P, and the entire computer sound goes to zero. I get no sound, even from other programs. I am not exactly sure what causes this sound-zeroing bug. I am running Blender 2.79b on a Mac with Rosetta 2. Seems to occur with one or more sound actuators or with an “invalid” sound file, or just having two or more sound actuators. I have also made a computer in the BGE, that sound effect worked fine. At first I thought the speakers blew out, but then I closed Blender, and the sound was able to resume, so in order to get sound in the BGE, I need to close it once the sound cuts out, and reopen the BGE to get sound back. Can anyone explain this bizarre bug and a way to get around this?

Oh, there is also an issue where you simply try to append from a newer file in 2.79b, and it sometimes refuses to open the file saying it “cannot read file, not a blender file”, even though it clearly is, just a newer version, so I should be able to import (append) from that file in question. Why, that happens to select blend files and not other files written with other blend files above 2.79b I don’t know. It also weirdly shows up as a folder, not the usual blend file scene occasionally in the picture viewer.

I am not exactly sure what causes this sound-zeroing bug.

I got this bug several times with sound buffering issues. But I’m not sure why that’s happening to you, it doesn’t seem like you’re using any buffering.

What kind of sound format are you using? Are you using any AUD module calls, besides Sound actuator calls?

simply try to append from a newer file in 2.79b

You mean a blend file that was previously saved in UPBGE 0.2x or UPBGE 0.3x? They aren’t fully compatible with vanilla BGE.

The “invalid” sound file is usually a .wav format. But the sound will work with just one actuator on its own, just not with two actuators producing any more sounds. No buffering is occurring in the background.

Having some objects in the same area and not inactive also causes this if they have a sound actuator hooked up to them and being instructed to play the sound. This should never happen.

By “invalid”, I mean the game engine seems to think that the file isnt supported, or something else screws up, and the game engine disables sound entirely throughout the computer, forcing you to close Blender just to get sound back for the system.

There is nothing wrong with the Mac or anything, its just the BGE. I wonder what causes it, because this is ruining my enjoyment of the BGE.

I am not sure why it does this thing, but maybe its due to the BGE “losing” the directory from memory, an overflow of some sort, some out of memory thing, although this is unlikely, its very odd.

Can you explain why this seems to be occurring, and as to how I might fix it when doing my files on BGE? I don’t want a silent experience, thats not fun at all.

No buffering is occurring in the background.

this is ruining my enjoyment of the BGE.

Well… respectfully speaking, why are you using that and not UPBGE?

I am not sure why it does this thing, but maybe its due to the BGE “losing” the directory from memory, an overflow of some sort, some out of memory thing, although this is unlikely, its very odd.

This is known to be caused by buffering, as buffering stores the sounds’ into memory. This question has been raised several times on the UPBGE Discord. You might try using different sound formats such as mp3 or ogg.

No 3D sound is occurring. Will try different formats when I get on my computer next time. The reason I dont use UPBGE is because its not stable yet (keeps crashing, freezing ingame, and has poor framerate with even basic objects like a ship, and rigs).

Update: Happening in 0.2.5 as well. It definitely is buffering, but on Intel computers, this never happens. I am very unsure why it does this, and it doesn’t occur in 0.3, but the drawbacks of 0.3 are a huge performance hit due to the way skinning was changed.

3D sound tested, and it also does this too. I would assume this does it on all sound formats, not just .wav sounds.

but on Intel computers, this never happens

You mean Windows in general or Intel brand computers? Because I’ve gotten this issue on three different computers w/ Intel & NVIDIA in the past. Others have experienced the issue as well.

You need to enable Auto Run Python Scripts in your User Preferences. 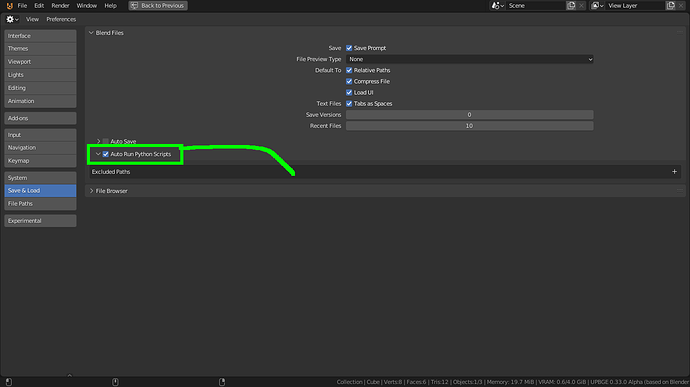