Some of you may have seen it on BlenderGuru already, but here’s the result from the latest tutorial: 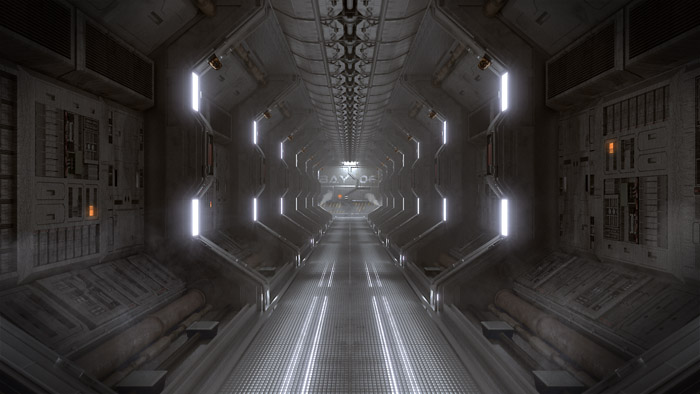 Created with Blender 2.63 and rendered with Cycles. Smoke added in Photoshop.

Very nice Andrew! Fantastic render. I just want to let you know, I first learned how to use blender from you. Thanks for all the wonderful tutorials. You also inspired me to make my own blender tutorials.

another nice peice. it has come at just the right time for me to practice for the interior of my own ship too.

Nice one Andrew! Might I even say, it’s gorram shiny!

If there’s one thing I notice (if you don’t mind my saying :o), it’s that the bump-mapping and/or dirt-maps on the control panels looks a bit too even, but I guess there’s a limit to how many textures you can create and how varied they can be, haha. Also, this coming from a Blender-head who kinda sucks at texturing and lighting

Anyway, looks great! I’ll definitely give the tutorials a look too.

Photoshop? Why add smoke in PS when you can make some in Blender (to keep on file) and add in comp?

Flawless. Nothing bad about it that wouldn’t be extreme nitpicking.

Just saying, with some additions, another version, this could serve in battlestar galactica. “Jump” lol

Photoshop? Why add smoke in PS when you can make some in Blender (to keep on file) and add in comp?

Nah, but seriously, two reasons: 1. Using the smoke simulator would add a whole extra element to the image that I would have to include in the tutorial. 2. Using real smoke images is far more realistic and way faster.

Thanks for your kind comments everyone!
It’s my first indoor sci-fi scene so it was quite a learning experience for me. And it was a lot more work than I expected

If you were only using file, I guess you could have a repository of your own clip art. Another tutorial in that, Making Stock Images that are useful

@andrewprice Maybe you could make some tutorials in the future about smoke simulation using Miikah’s new smokesim branch though?

The image is very nice, I’m going to take a look at your tutorials later

It’s so sool!!! It’s like a screenshot from a sci fi movie! I am fascinated!