I’ve been working on an engine for a spaceship and once again I’ve hit a dead end due to my greatest weakness, texturing. How would i go about texturing this? what sort of textures would you use? :spin: 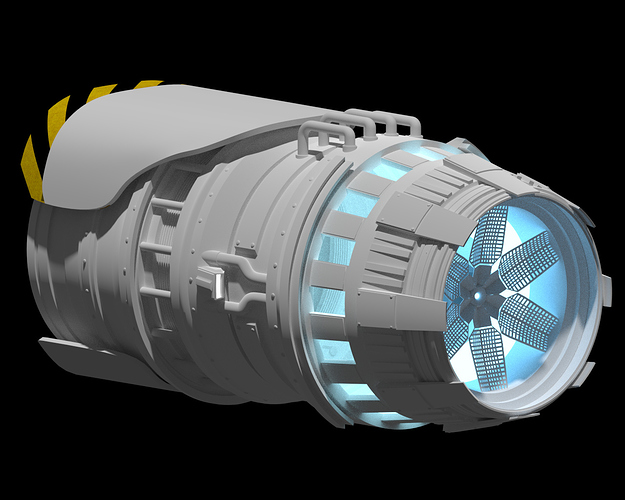 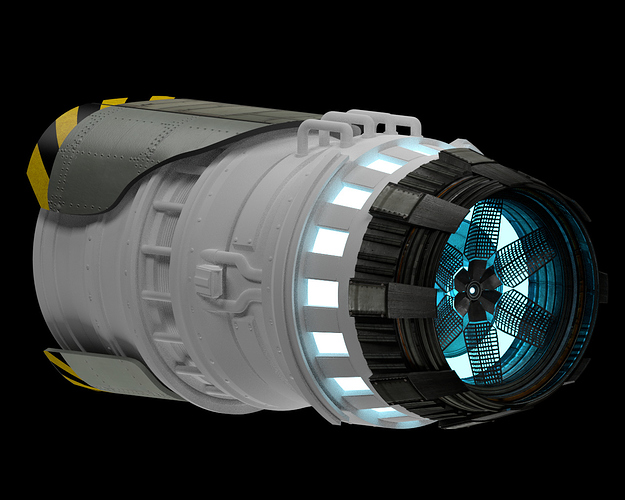 This is a little project I did last summer, to develop my modeling skills. For a long time, it was just sitting on my hard drive, but after a request for the file on Google+, I decided I may as well share it here. The objects/materials are named...

Im sure that you can make a texture like this engine glow in gimp. I have been using the one in this models for now, and will later replace it with one of my own.

My tips for mech texturing; separate everything into parts (p-key if it’s all one mesh) and use smart uv unwrap, it does most of the work for you. As for what kind of textures, I usually use metal textures and then use them to define glossy and diffuse materials.
looking great so far!

Also, if you continue work on a project, post it in same thread you started out with.

I’ve added some more textures, it takes me ages because I’m terrible at it

The more you texture the more easier it gets

Also, talent is overrated (though it will make your life much easier)

What you have looks pretty good already!

what size is the engine supposed to be? I ask because I see the yellow and black warning stripe and it leads me to believe a certain scale.

What kind of hoses?

Actually I guess hoses wouldn’t make much sense if it’s a spaceship. But I think they look awesome. ha. You know, hoses to transfer fluids like fuel or coolant.

This looks really nice, great work. As Craig Jones said, I’m having a hard time understanding what the size/scale of the engine is supposed to be. To my eye the yellow/black line and the rivets have a scale that does not seem to match the scale of the rest of the engine. Just my first impression. Good luck!

I don’t think hoses are safe for outer space at high speed, but I have seen models use hard tubing that is supposed to be for the same purpose, and they look like conduit lines. Kind of like what you see for rigid hydraulic line or fuel lines in some cars and work vehicles. Best advice I got was when JDaniels did his tutorial on space ship greebles, and he pointed out that electrical lines and pipes usually look best and translate well when handled in multiples instead of single lines, even if originating and ending in different locations.