Took me two days to figure out how to model this thing. So far so good though I’m fighting with the plumage on a separate layer with a hair particle system. I also haven’t found the right texture for the helm either. 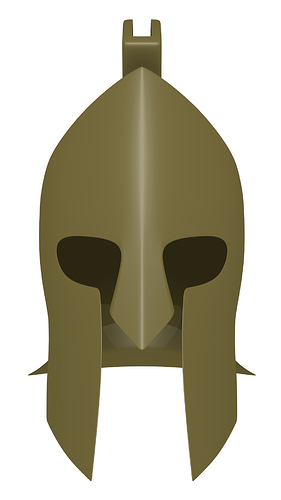 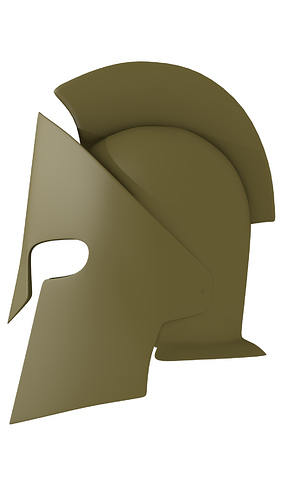 Any thoughts or comments are most welcomed.

the shape looks good. are you using cycles or BI for the materials?

I’m using the BI for rendering. Cycles and my graphics card don’t get along.

cool, i may have a few brass materials thati have collected over time, i’ll see if i can dig them out for you

That would be really nice. I grabbed one earlier off the materials repository but didn’t like the textures that were on it. I also tried a few textures that I made myself but for some reason doesn’t show up using it on the normal setting.

Hmm most of the brasses i have are from the materials repository too so you have them already, if you dont mind though i could see about creating one that would be suitable. do you want shiny new brass, old and worn or somewhere in between?

Old and warn with maybe a dull shine if possible. I’m terrible at creating textures.

heh, yes creating textures can be daunting and i’m still really only a novice at it myself, but i like being challenged

Hee hee. Just looked at more textures I made in illustrator and for some reason they don’t want to act like a bump map gonna have to do more research on it. Might just be a case of they need to be white and not black to work. Hmmmm…

Yep I was right. White makes the bump and black does nothing slaps self

lol, this is what i have so far, ignore the poor modeling i just threw something together to get the look of the thing

it may be a little too polished though and not as brown as some of the references. i’ll have another go and see if i can do something better. in the mean time you can add this material to your library. cc0 of course

Oooo I like the pitting on that that is awesome!

And your model isn’t bad. You should’ve seen what I did yesterday it was waaaaaay worse.

seeing what you have today, i highly doubt that what you did yesterday was “bad” !

the pitting is just white dots with a jittered scatter brush in gimp that i did ages ago for another project. though i did use the bucket tool in photo shop just now to take away some of the soft edges. (not that i couldnt have done the same in Gimp, i just click whichever is closest to the mouse at the time!)

You are too kind and have helped me out tremendously. Course with the realization that the bumps need to be white I have to fix all my textures I’ve made in illustrator which I will save for another time. I do most of the textures I make in Illustrator but I do have Inkscape but haven’t spent much time learning it.

I probably have to do the particle hair over again instead of being on an arc the arc is a wave. I’ll probably do a plane with a curve modifier and see if that works properly. I tend to work harder not smarter and make things more complicated than I need to. Maybe I’ll learn someday to be the opposite

i havn’t used illustrator before, but is there an invert function that simply swaps around the foreground and background colours?
good luck with the hair, i still have major problems getting that to look right!

and, i’ll keep working on that brass, see if i can come up with an older looking texture.

I’m about ready to ditch the hair and do some kind of duplivert thing with a tapered cylinder.

Nope duplivert didn’t work how I expected it. I have a feeling I’m just going to model a mesh and then texture it with a hair texture.

yes, a mesh could work well. not entirely sure whether to suggest several little meshes or just one mesh for the whole mass. will be interesting to see what you come up with.

I’m really close. I made the tapered cylinder and used it on the hair system. I just need to scale it up more to make it taller. I’ll definitely be posting an image once I get that done.

I look forward to seeing your progress.

This should be bronze, I believe

But therein lies another problem, are you going for museum-artifact bronze, highly-polished bronze, or oxidized bronze?

That’s a very good question Vicky. I could’ve sworn it was brass though bronze makes more sense. Brass is a soft metal isn’t it?

I’ve found some reference images for the shield, spear and sword to add to it. Right now trying to render out what it looks like right now with the first part of the plumage done. It’s taking is sweet time rendering too for a 50% sized image o_0 Man I wish I could build my own computer it’d be a heck of a lot faster esp with the BI.