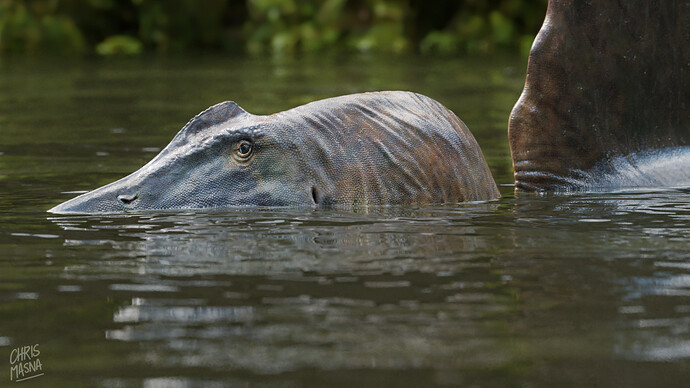 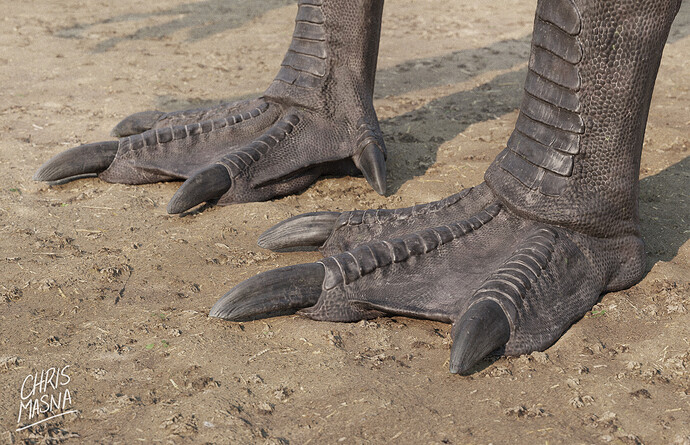 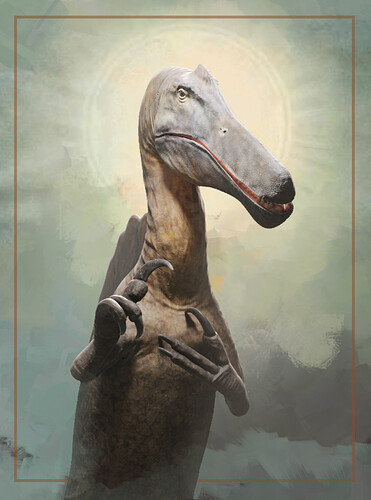 Modeled in Blender, skin in ZBrush, textures in Substance painter, rigging and animation in Blender. Started in 2.8, finished in 2.9.

My take on Spinosaurus.
This is the third (!) time I attempt to reconstruct this beast, aborting the first two due to new discoveries being published.
It is also the first dinosaur I do from start to finish, so there are many things I’m not entirely happy with, and will come out better, I hope, in subsequent reconstructions.

Holy crap, incredible candid shot by the water. I felt like I was there, better than most CG dinosaurs in a lot of documentaries I’ve seen. Well done.

Totally amazing all around - this is top line stuff!

awesome work Chris, very cool to see it in motion Hey thank you! Also I submitted the video just now, tried earlier this week but it showed an error screen from, something about crawlers or bot traffic or something

This is just such incredible inspiring work. The first video looks so beautifully natural and it’s a living breathing animal there rather than a fantastical monster. In the true sprit of modern paleo art All Yesterdays movement. Love the subtle movements on the shaking of it’s head and secondary wattle jiggle. And the curved swan like neck is there too which is right up with current thinking.

The walk cycles are great but movement on land is still a bit mind boggling to me. Although it seems obvious it would have to have been bipedal as the shoulders arms wrists and hands are so obviously not anatomically right for baring any substantial body weight. They are like Sloth arms and hands really for grabbing things.
The animations of a few years back ( … from National Geographic directly possibly ? … ) showing it moving quadrupedally walking on it’s inwardly curved hands and wrists seemed very unconvincing and felt to me borderline absurd. I sometimes wonder if this one might have been an actual Theropod tail dragger exception as the updated tail is so back heavy. But I’m not an expert and realize it’s an almost blasphemous thing to dare to suggest. But almost everything else about it is so weird anyway.

But the back legs do still look incredibly small in the most modern reconstructions. I sometimes get to talk to working paleontologists in my own work. The last I was asking about this it seemed generally felt that there are still many outstanding uncertainties about Spinosaurus. That there is likely a lot still to be settled about it’s actual body proportions and it’s still very much a work in progress. But the last I was in a conversation about this was about two years ago. Perhaps this is getting more settled now ? I understand how difficult it must have been to finish with so much new stuff coming out in recent years.

Quite funny that last animation and looked bit familiar. I had to animate a crocodile reacting to a Spinosaurus like this for BBC’s Planet Dinosaur many many moons back. But it didn’t have quite the same sort of surprise punch yours has.

hello how you did the head shake/jiggle, did you used some technique (like cloth simulation/sofbody) applied to the model?

There is an addon called Wiggle Bones. I just weightpainted the skin (partially) to those bones.

Hey Toka thanks so much!

I remember seeing your Sinosauropteryx years ago. It was jaw dropping, didn’t know you could do something like that with Blender (back in the day when users of other software would laugh at it in forums and FB etc) and it was a huge inspiration for me to slowly keep learning until I could do a dinosaur. Still haven’t tried feathers/fur though haha.

That walkcycle…yeah. I made it partially as a reaction to other models with running (!!!) animations. So I made what in my mind could be the max speed for this animal. With a head nearly 5m in front of those tiny fragile feet, one step in false and it’s game over. I also think the tripod/tail dragging is totally possible, in case they ever left the water, but you know, I’m no expert in biomechanics and there is actually a study suggesting normal walk was possible so I had to include it.

It’s interesting how much of the official reconstructions (knuckle walking, “M” shaped sail) have no actually no evidence backing them at all. Still so much room for speculation. Hopefully we’ll have more discoveries in the near future.

but how is graphically setup the bones in the armature?

You mean this? The Wiggling bones are the ones connected to the spine.

and what about the weights? how partially is weighted the wiggle bone and spine bone together?