Spots on skin texture with high particle count on loincloth

I usually try to sort my way through my own issues, as I find I learn better that way, but this one has really got me stumped…

I’m a bit of a noob and this is the first project that I’ve attempted that hasn’t started with a tutorial or anything. The WIP thread is here:
http://blenderartists.org/forum/showthread.php?t=112551

The problem that I’m having is spotting on the stomach of my little green man when I increase the number of hairs on his loincloth.

30000 particles and many spots on his stomach:

15000 particles and a few spots on his stomach:

10000 particles and no spots on his stomach:

A simple solution would be to have less particles, but I think the quality of the fur on the loincloth is far worse with only 10000 particles as opposed to the 30000 particles that gives the lush effect that I wanted.

The skin has SSS, and as the SSS layer renders, there is a bit of spotting shown. Not sure if this is normal.

Edit: The loincloth is on a separate layer to the main model to allow for easy editing and removal for resolving any issues that may arise (such as this). Not sure if this is relevant, but decided to include it just in case.

I was wondering if anyone knows what is causing the spotting on his stomach and if there is a possible workaround that I could do, or if there is a simple mistake that I have made… I have been using Blender for a little less than a month now so am still very much a beginner at this.

maybe I’m going blind, but I dont see any spots on his tummy. I see a loincloth, above that his tummy/rib cage and above that his pecs. In fact, I subtracted the bottom image from the top image, cranked the brightness/contrast of each way up, and the only difference is the loincloth. sorry. no spots. Maybe you cat sneezed on your monitor last night…

When I crank the brightness wayyyy up i do see spots above the loincloth, but they are there on both images. I would suspect stray particles…? 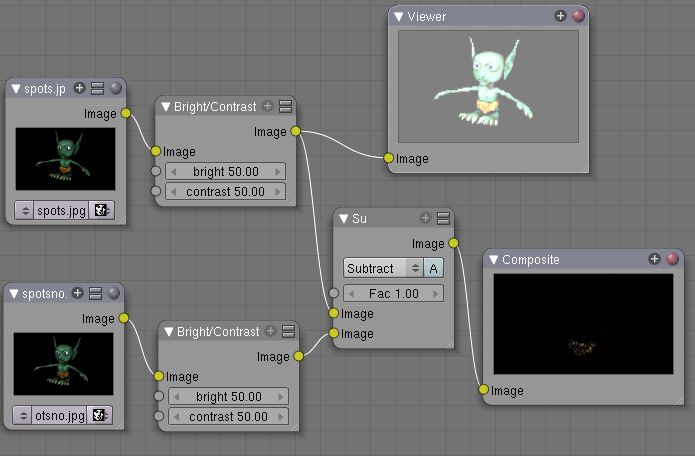 Hehe, PapaSmurf. That area of my screen is cleaner than it’s been in a long time ;).

Thanks for the analysis. I’m thinking you may be right, they may just be a figment or something. Maybe nothing can be done. I cut, cropped and expanded the section of the image that I’m thinking about…

…A thought just struck me… I’m using Jpegs. These are supposed to be lossy. Could this pixel error be due to the image format?

Thanks again for your time PapaSmurf… I’m gonna have to learn how to use those nodes and stuff. Looks really useful :D.

Just rendered as a .BMP and got a spotty result still

Is this an SVN build? I know that there’s some pretty intensive work going on right now on particle rendering. This could be a byproduct of some of that.

Glad your kitty wasn’t sick or crying out for some attention, LIKE MINE DO by WALKING ALL OVER YOUR KEYBOARD! AGGGHHHH!. anyway, to troubleshoot, move the loincloth to another layer and de-selecte that layer and render him, as they say in these here parts, “Nekd as a Jay Bird”. If no spots, we know its connected to the particles. Then double check you got ALL the particled meshes moved over; might be one left over from previous modeling. 99% sure its something like that.

1% sure it has to do with the green material. You’ll have to post a blend for that, because that is funky.

Good catch on the jpg compression. Most often though, JPG tries to reduce the number of different colors, so you’ll see banding artifacts, not spots.

bugman_2000: I am using the standard Windows 32 bit build of Blender, as downloaded from the main site.

My conclusion is that the spotting is definately linked to the particles. It is possible that there is some kind of interference with the material of the skin, but the skin material is simply a single colour/specularity combination with SSS.


but the resulting quality is poor so the spots are not easily visible.

The reason I did this was to ascertain if the spots were stationary on the skin surface. The video is poorly lighted (my first animation), and the image size was small (this seems to have exacerbated the spotting problem), but there is sufficient light on the front of the model to tell that the spots move from a central position on his front, up the right side of his chest (his right), and up to his shoulder, where they disappear. This effect occurs as the camera rotates to the left, with the particles always seeming to be on the side of the model closest to the camera.

I have rendered the loincloth alone, and there seem to be no stray particles.

The spots are clearly (it seems to me) linked to the position of the camera in relation to the model, and are caused by some sort of interaction between the particles and the skin texture.
On the animation, they appear to be present around the top of the loincloth as seen Through the main body,

If anyone knows of a filehosting site, i could post the video (490k) if anyone thinks it may help.

Thanks for your time and input in this. Your thoughs on this subject are much appreciated.

I’m thinking the basic model is nearly complete. Maybe an earring and ponytail… but I’m more than happy to post the finished .blend for people to look at or use (provided they give me credit

). It is my first model so I have probably made mistakes along the way, but I have learned a lot, and if anyone can learn from my successes (and failures

) then that would be a bonus.

Edit: Uhm… I don’t know how to post the .blend yet though… never actually had a .blend to post until now

To post a .blend use a file hosting service like uploader.polorix.net or there are plenty of other free ones (since that one has recently come back from being hacked), just google for them.

On image compression artifacts-> blender stores the image internally in its own format. Its only when you say save it out as .jpg or .bmp that it actually applies those forms of compression. When you render, its not compressed at all and you can save an image an any format without having to change the format->rerender->save. Just render once, pick the format->save->repeat format picking & saving.

On your specific problem, it may be a problem with SSS and particles. I know in the past there have been issues with particles and Raytracing (specifically transparency) so this could be an error in the SSS somehow. Just a thought, try turning SSS off and rendering to see if the spots are still there.

This is probably a bug. But I doubt it’s worth reporting, since the particle system has been completely rewritten and as I mentioned particle rendering is also getting an overhaul. You might want to try using an SVN version and see if there’s an improvement (no point getting too used to the old particle system, either). You can download a ready-to-use SVN build at www.graphicall.org. It’s no problem to use the two versions side by side, just drop it into a separate directory.

bugman_2000: Thanks for the link. I might try the alternative that you suggested. Have tried a few things and cleared out some stuff that was just nooby and messy, but no joy. Have tried with all possible combinations and have concluded that some of the particles are visible through the body of my character no matter what. Must be a bug, like you say.

Any idea if i’ll have to re-engineer the hair particles when the new release is done? I’m going to redo the loincloth definately, but was thinking of adding a ponytail and don’t really want to have to redo a load of stuff… if it comes out really fast then I’ll probably just do it anyway as a kind of place holder or something. I’ve only been using Blender for just under a month now so not had too much time to get used to anything, never mind particles (fortunately

I’m going to redo the loincloth definately, but was thinking of adding a ponytail and don’t really want to have to redo a load of stuff…

My recommendation is to focus on learning the new particle system. It will be one of the major features of the upcoming release, and it will blow the current particle system away. For hair, check out the videos here:

Combing, Brushing, and Cutting Hair is in Blender's Future! - BlenderNation

Just imagine what that will mean for your characters, and more...the ability to easily shape and design not only hair but, anything created using particles! Fortunately, we can do just a little bit more than imagine. Here's a demo video of what's...

I think that there’s an effort being made to make sure that old particle effects don’t break in the new system, but if you’re just learning there’s really no point in not starting with the new particles.

The documentation is still pretty scant, and you WILL find plenty of changes between what’s in the SVN and whatever the partially completed docs say.

Jahka has started documenting the new particle system at the Blender wiki. Its in the early stages and not everything is covered, but it is a good place to find information on the new system if you are testing one of the development builds. Its also...

That said, the current system is not stable, and if you make an effect this week in an SVN build the effect may break next week. So if you’re doing production work, stay with an official release.

I think that there’s an effort being made to make sure that old particle effects don’t break in the new system, but if you’re just learning there’s really no point in not starting with the new particles.

When’s that damn release coming out?! If you could see me thinking about it, you’d probably file a lawsuit.

I’ve also noticed that if I cram too many particles into a small area it bugs up. You know what might work? Try adjusting the seed, sometimes that clears it up for me. If not, you might have to tone down the particles until that damn release comes out. (And I acted this way for the 2.44 release too.) Or, try adjusting your forces, but they look good now,

or adjust the weight paint of your primordial pants, they all afflict particle placements.

Thanks for the links bugman_2000. Have checked out the documentation and the new particle system looks excellent :). Enough similariries to the existing system to be pretty easy to pick up, knowing what I do. Most of the major changes seem to be in the more advanced stuff that I have yet to learn.

Thanks for the tips iconoclast. Will experiment a little, but with the changes on the way, I don’t want to spend too much time familiarising myself with the workarounds. Still, the things you mention may well come in handy with any future bugs that may arise ;).

I have “finished” the model of Plurdo at my WIP thread:
http://blenderartists.org/forum/showthread.php?p=1010531#post1010531
if you want to check out my results. I guess I’ll wait till the new particle system is in effect till I do much more to the particles on him.

Thanks again to all who have helped me address this issue.