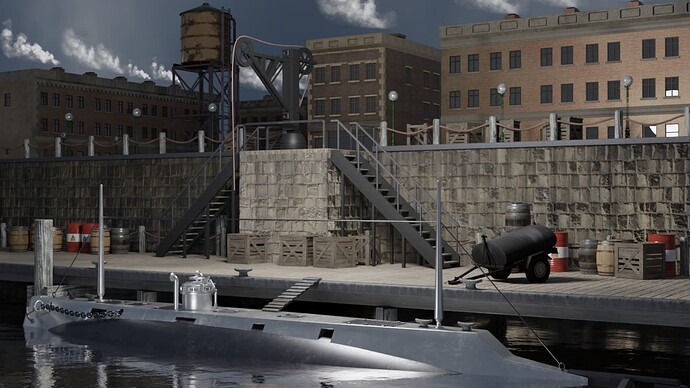 This is something I’ve been working on for a little while now. It started out with a fully modeled USS Holland (SS-1). The Holland is the first USA submarine invented by John Holland which became the first US official submarine. The Turtle which was invented during the Revolutionary War was a privateer vessel and not officially a part of the Continental navy which itself barely existed. Six of the Hollands were taken by the US and other variants were later built for other countries. They were mostly training vessels. Consisted of one torpedo tube and a dynamite cannon which somehow fired dynamite. The Hollands lasted from 1901 to 1905. None of the actual US submarines survived history but other variants in other countries have.

Initially it was only my intention to do the sub but after finishing it I thought it would be neat to see it floating on water so I’ve been building this scene. Just below the waterline is another scene so I can animate the sub moving under water as part of a very short movie clip. Just a work in progress I thought I would share.

Here’s a picture of the Holland under water… 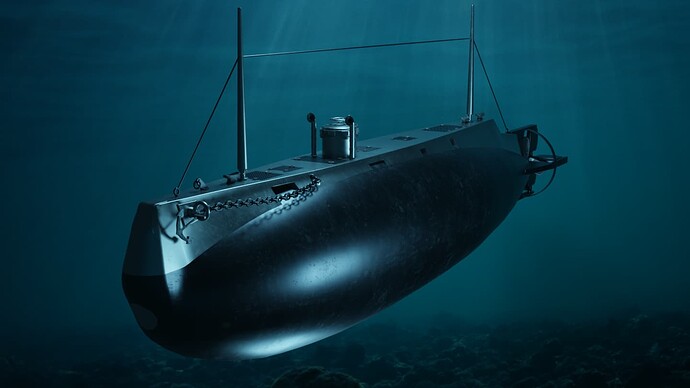 you can see a few more pics of the Holland and my other works at artstation.com/rgarber

Nice boat. I did a model of the British version several years ago. Fortunately, that one still exists (sort of) so there’s a little more reference material.

Thanks! I’ve seen and used the pictures of the English version for reference. They cut a hole through the side, one in the back that I saw and I guess one up front too. Be cool to walk through it. Pretty cramped they say.

Thanks and thanks again for taking the time to post that. It’s one of about five WIP projects I have going and I’ve thought it best to upgrade my computer before rendering the movie clips though the last thing I want to do with this scene besides some volumetrics for a wee bit more misty look (maybe?) - is add some people mulling about the pier?