In your particles buttons change the type from emitter to hair.

just that: I need the “hair” particles to render as REAL halos (was no problem in 2.45 when turning of “vector” like behaviour of particles.) But now I am just not able to render them as real halos… only as “path”-halos. Any idea on this? thx in advance…

To approximate the old static particles system, try setting the Physics type to None.

To approximate the old static particles system, try setting the Physics type to None.

I tried that already… but if I do that, there won’t be any more particles at all…

ohh plz… is there no solution to this :)?

it is really annoying for example, when changing something on the particle system that i have to go back to the first frame EVERY TIME I change something…

And I haven’t figured out, how to use the static particle system correctly, if its even possible… (using halo rendering) there doesn’t seem to be an option how to change particle sizes!..

On the other side the “vector” option from the previous versions which renders the halos with linear blends instead of radial, is turned on by default. But is it possible to turn that off somehow?

Are all these things “features” of the new blender paritcle system or rather bugs :)?

To your original question. 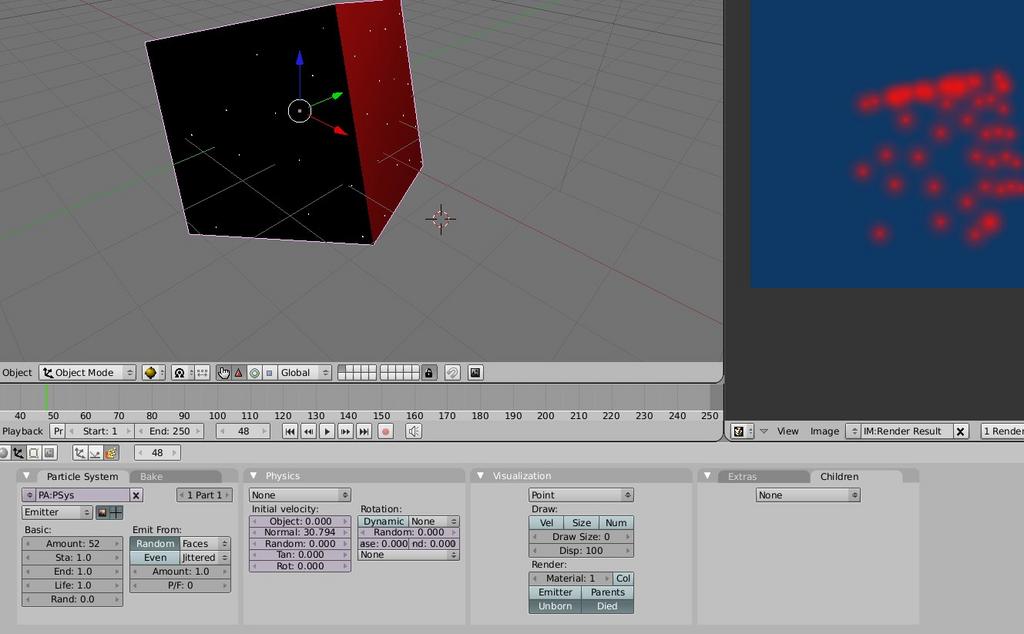 Thanks for the example .blend file. But what if you don’t want the “static” particles to lie ON the mesh. Rather I want behavior similar to what you have (start=end=life=1) but the particles distributed around the mesh in a cloud-like pattern. At the same time, I want the particle positions to be independent of time.

(I realize this post is almost 2 years ago, but perhaps you’ll still see this reply…)