I am trying to set up an armature that will allow me to properly animate a stick figure man but when I set it up and move a part, his arm for example, other parts not directly connected move along with it. How can I single out just a specific part that I want a bone to move? 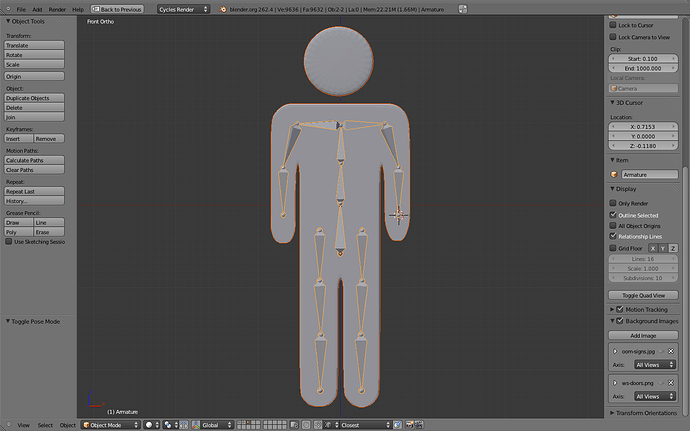 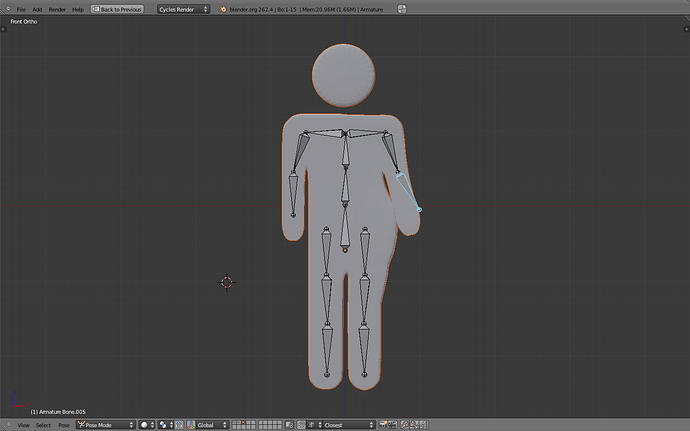 You have a problem of weight here. You could fix it by painting the weight but make sure that you check Auto-Normalize. If you are new to paint weight, you should look for some tutorial, there are very good ones one blender cookies!

Oh ok. I had read something about weight painting but wasn’t too sure what it was. I’ll be sure to check out a tutorial. Thanks for the feedback.

Auto-weighting creates lobes of influence around each bone. Picture the invisible lobes around a long magnet. The closer you get to the magnet with a piece of metal, the more it tugs on the metal in your hand. The influence drops off as you move the metal away.

By comparison, Auto-weighting “magnetizes” each of the skeletal bones with the mesh being a metallic skin attracted to the various bones. The problem which arises is in the posing. If the arms are posed close to the legs when autoweighting, then the arm bone’s influence will bleed over to the body and even the legs. Conversely, if the legs are moved then likely the arm and part of the body will move also with the leg.

To offset this when auto-weighting, if possible, pose your character mesh in the T pose, or the Da Vinci pose. Those are more forgiving with auto weight. The limbs are thereby separated away from the body allowing less influence from the arm and leg bone magnets pulling at the body mesh or the other limbs.

Also scaling the model is important. A larger model (in Blender Units) will help minimize those lobes of influence in the arms and legs when auto-weighting. For this part though, you need to look at a couple more tutorials on the subject. Also, Lee Salvemini has a very good “free” two part video tut on weighting a character. It’s a well done precursor to his modelling and rigging tutorial

I’ve tried that as well, but I’ve found there is still bleed over if the mesh and rig are too small and the arms and legs are posed too closely to the body.

I’ve tried that as well, but I’ve found there is still bleed over if the mesh and rig are too small and the arms and legs are posed too closely to the body.

Typically, only if mesh overlaps. But that doesn’t seem to be the case here. Hence “90%”

Since the mesh in question isn’t particularly detailed or difficult to recreate, I think I will just remake it with arms in the T position as you have suggested. I did notice the are effect of the automatic weight and unfortunately, the arms are too close to the torso for them to act independently of one another without weight painting. Thank you all for your responses.