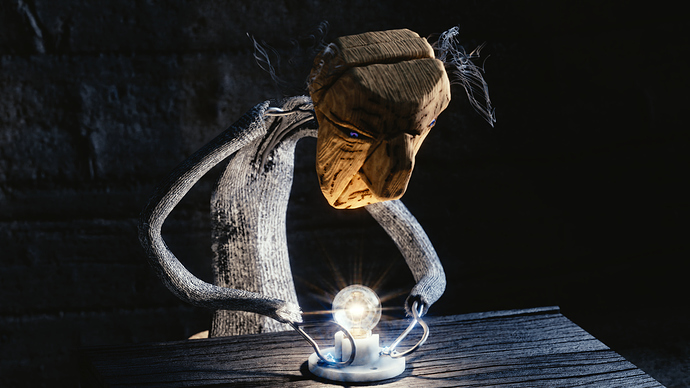 As you can see, I’'m a big fan of stop-motion, particularly Easten European animation.

Not sure if this should really go in the work in progress option… I do have plans to make an animated short film with this character - an adaptation of the Russian folk story Death and the Soldier. - cultural appropriation I guess, but I think I can get away with it.

I would have thought there would be far more I could kit-bash - but even textures are generally on a much larger scale. I’m very thankful to this shader: https://www.blendernation.com/2017/10/20/procedural-cc-0-pbr-wood-shader/

I wander if it would make sense to actually carve little wooden head segments (the puppets uses replaceable chin, forehead and mouth to animate the face) and photoscan them. That could be a cool thing to look into.

If I do go on with it… I need to work out how to make a mock-stopmotion set of a ruin of some large crumbling concrete building, as I want to semi-modernise it, and get some semi-anachronistic, but still somehow cohesive style. But I think the film should look like it was made in the early 80’s, so no blue LEDs or flatscreens. And I want to keep the scale as consistent as I can.