This is just some image I created for a school project in art class. It is supposed to be surrealistic. The original render was to big for uploading, but I hope one can still see enough. The mountain was made with the Landscape-Addon and the sky is a textured sphere, not a hdr (unfortunately). In the original render the hanging person was in focus and only the background was defocused, using DoF. I’m not really happy with the image, especially the lighting, but I just can’t think of a way how to light the scene realistically. That is why I would love to get some constructive criticism. 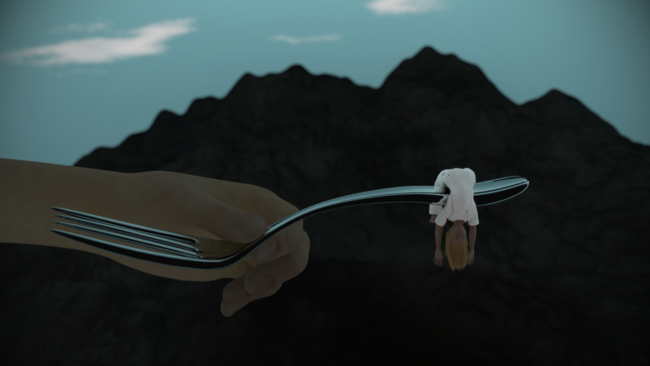 Yeah, sorry but that really isn’t working for me. Do you have a theme in mind?

Looks like you got pretty even lighting from the sky around you. I would suggest some directional lighting. Just my two cents. Maybe use directional moonlight.

Lighting changes as noted above will help, allowing some detail of distant mountains to read as more than a fuzzy outline. I do not necessarily ‘get’ the theme that you may be attempting, however, the spoon is getting too much attention, scale up the figure just a bit to help the balance, and certainly increase the relative contrast and detail on the hand. Right now, it fades, and the spoon is the dominate element, almost ‘floating’ and the figure is too small, for my taste. Keep at it, look at it the following morning, listen to the inner voice that tells you, “what isn’t working,” then listen and act on it. I have a close friend that I have come in, “cold” and offer a response, and I usually learn something in the exchange. Paul Simon recently discussed his music making, saying it can take a month to do a song. He does a ‘first pass,’ sets it aside, listens to it a day or two later, and notices, “what doesn’t work,” in the mix. Same deal with visual construction, it is a iterative process. Best to you.