I’m aiming at human photo-realism since I started using Blender in 2014.

This model is still a sculpt using Vertex colors.
As I didn’t had any nearly resembling reference picture, I took a long time to make it.
I don’t know if I’m ready to go for the retopology and make a better skin texture to increase realism.

I followed Aneesh Arts’s Skin Shader tutorial on Youtube for the skin and eyes shaders. Hairs were done quickly, I would prefer a Ponytail actually.

Any suggestions for the future (retopology, texturing) ? 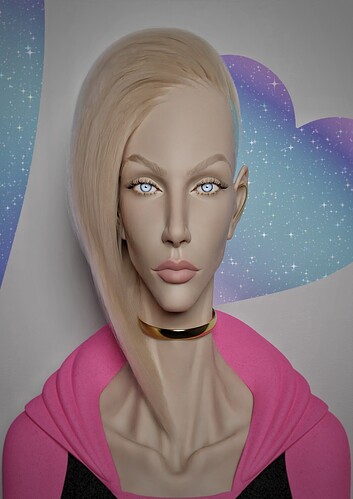 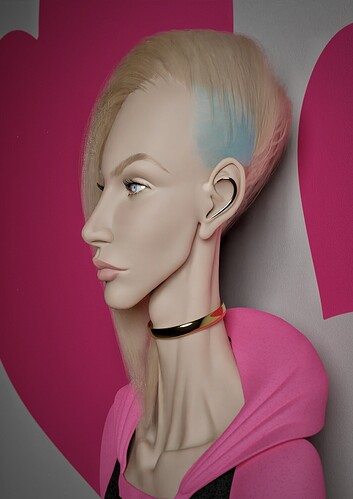 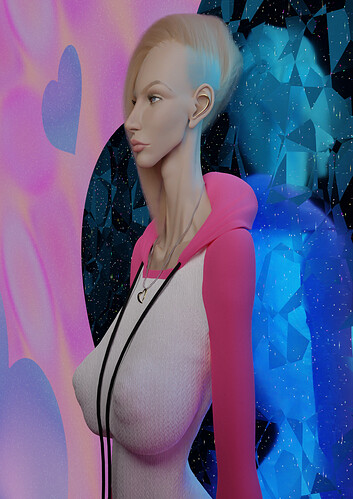 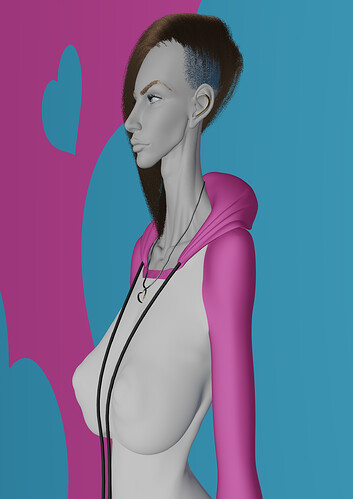 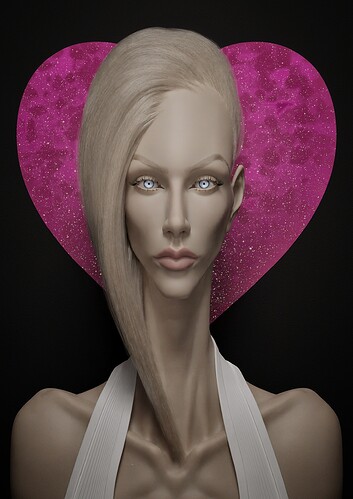 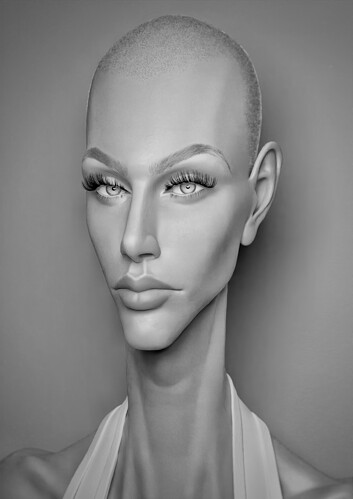 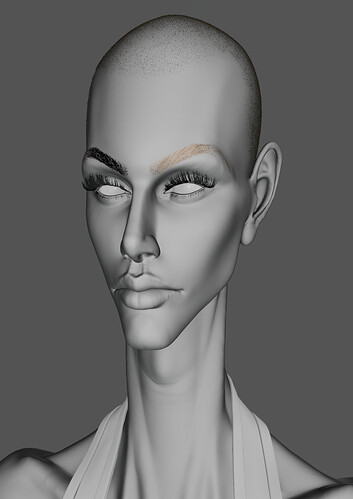 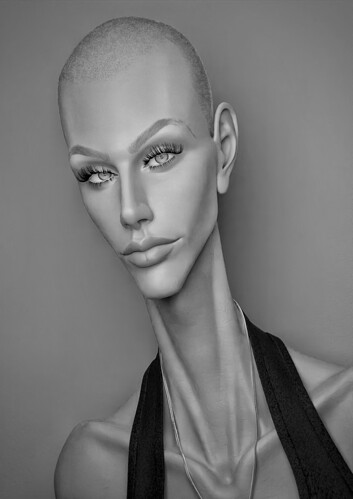 If you’re aiming for realism, her face is WAY too elongated, the ear connection to the head is off (that’s really hard to get right though, and aside from being elongated the shape is pretty good), her neck looks like it has extra muscles/tendons and they’re too defined, the collar bones stick up too high and have too much definition and they should be two separate bones that meet at the center of the sternum (here they look almost connected to each other, the middle point should not stick out as much as the clavicle). The neck is also very elongated. Arms are too thin. Skin shading looks good though, as do the eyes. 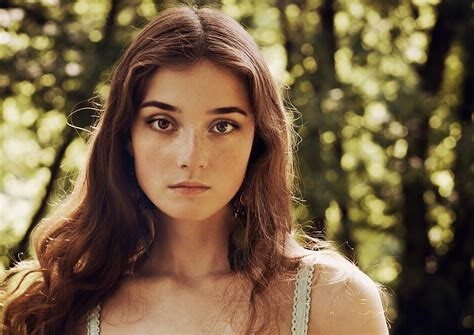 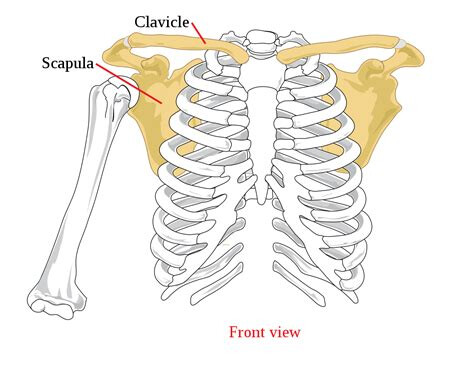 As for her breasts… I’ve never seen a human woman with areolas that take up half her breast. I realize you might not be aiming for realism with her chest,* but you’ve made both the areola and nipple so huge that her breast looks more lumpy than sexy, and even tight shirts don’t ride up the chest like that plus fabric of any thickness will obscure the transition from nipple to areola and areola to breast. It should be pointy without definition, if you want realism.

(* Though if this is supposed to be fetish art, non-photographic fetish art often ignores reality when it comes to breasts, which is possibly why it never does anything for me - it’s too unreal and inhuman. But if you’re aiming for the exaggerated fetish art look, I don’t know, her chest might be fine?)

Thanks for your advices.

Don’t look at the breasts on the first pictures I posted, I’m still working the body in general and some details are not appearing natural enough. I wish I could change the first post but I can’t do so anymore for some reason.

I sometimes forget to mention but this character is tall (> 2 meters) and isn’t supposed to be an “average” human being / body, which I try to set between slim and athletic. So it’s normal for the face or other features to be longer than average, I just make sure it doesn’t look disproportioned (sometimes I make the head too big for example). I saw the arms were too thin and some other details you mentioned.

I don’t think I added extra tendons to the neck. Maybe the 3rd ones on the outsides are just too defined. I see for the clavicles and the ears, they don’t look natural enough for now. I guess I’m not following my references enough. I’m struggling with the lips too. And I’m not sure about the skin shader, but it’s still untextured. I’ll have to see that later about making the different skin pores and details. 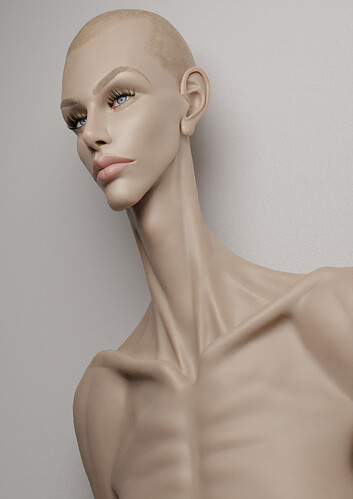 I sometimes forget to mention but this character is tall (> 2 meters) and isn’t supposed to be an “average” human being / body, which I try to set between slim and athletic. So it’s normal for the face or other features to be longer than average, I just make sure it doesn’t look disproportioned (sometimes I make the head too big for example).

I can tell she’s supposed to be tall, but I haven’t observed tall people having heads or necks that are quite so elongated. I used to have a friend who was so tall he had to duck through some doorways and I don’t recall ever noticing anything odd about his face or neck. There are specific cultures where women intentionally elongate their necks by using rings to stretch it upwards, that’s kind of the look her neck has, sans golden rings. I wouldn’t say she looks disproportionate per se, it looks like intentional stylization since her features are pretty consistently sharp and long and nothing looks uneven. (I realize it’s not supposed to be stylized, I just mean it doesn’t look like a mistake. Overall the sculpting is pretty solid.). For tall people, the elongation is usually more noticeable in the torso and limbs than the heads in my experience. Perhaps the neck too, but not quite to this degree.

It’s definitely possible your neck simply has too much definition. If your references include anatomical illustrations, it’s easy to accidentally overdo it. Even on someone VERY skinny, skin doesn’t usually cling quite so tightly to every crevice in the bone and muscle, but trying to follow anatomical illustrations closely can do that.

To be honest, I don’t see anything wrong with the lips. They fit the aesthetics of the character nicely. The lower lip edge is a little close to the chin indent, I suppose, but otherwise I can’t think of any improvements.

I actually find the skin impressively convincing for skin that’s untextured beyond a little vertex painting (it has a similar feel to photoshopped modeling photography used in magazine ads). You could try increasing the SSS, if it still feels off to you. Specular looks on point though. And the color variation needed for more natural looking skin will come when you texture it.

Updated almost everything, from the eyes to the oval.
Getting the eyes right really helps to figure out the overall features.
I think I’m almost done at this point for the face. Just needs retopo, hairs and some texturing. 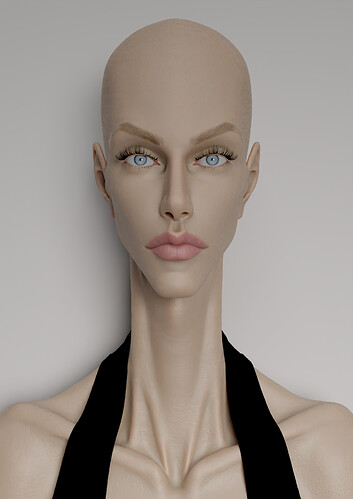 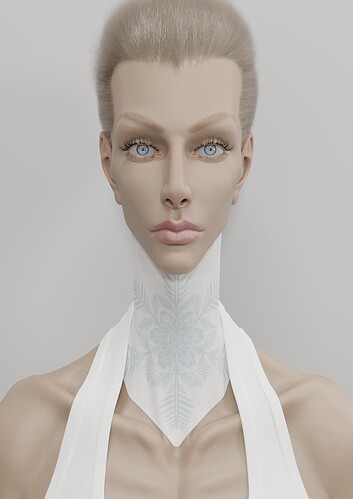 It starts to look like a real portrait from here, but for now the skin texture is just a basic vornoi. I’m still not satisfied with the ear and the eyelids are still a pain to make clean. 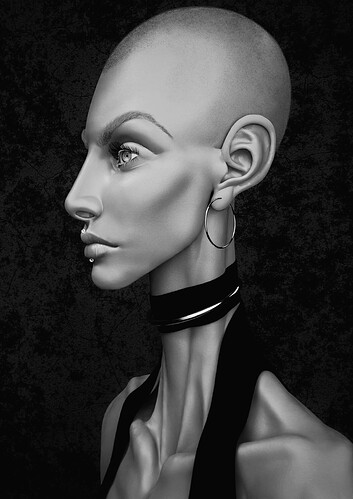 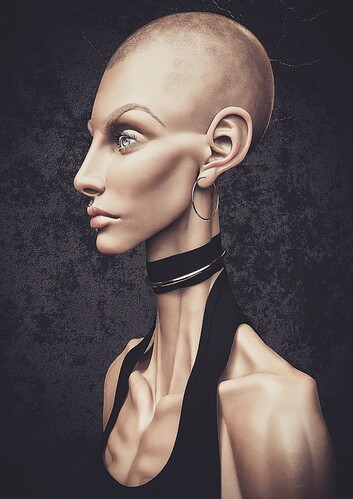 An area still puzzles me. The area where zygomatic bone meets the ear.
Even people who suffer anorexia do have a more gentle slope in front of ear.

Despite that, the model looks good in my eyes.

Somehow, this character reminds me of one of my favorite Disney Villains: “Cruella de Ville” (gotta luv the name …) from 1961’s 101 Dalmations. And yes, I mean that as a compliment.

I’m still uncertain about the skull details and shape, but I want the different parts to be visible enough to give the face a sharp look. 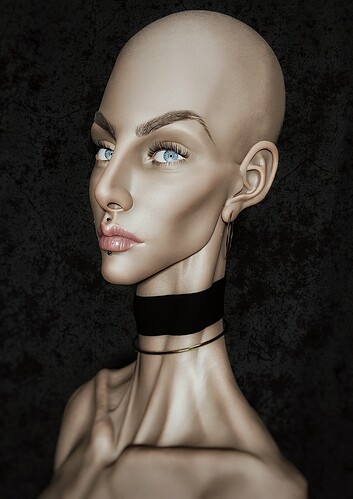 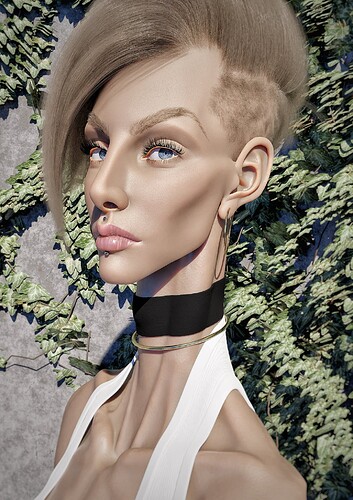 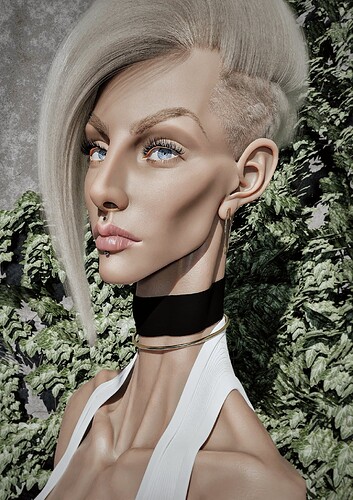 I managed to correct proportions and shapes a bit. I’ll have to focus on details next (proper skin texture, eyelid detail, eyelashes, hairs, etc…) 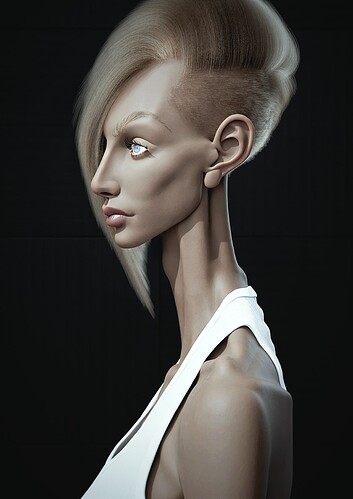