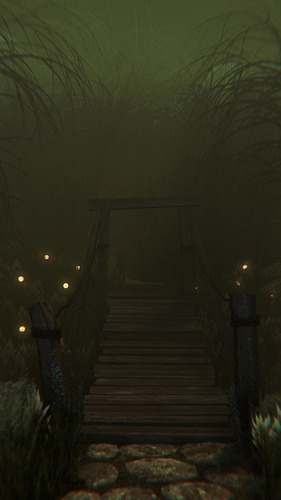 Tried to do a fast one-day scene in blender. How do you think it ended up ?

It needs Swamp Thing, even if just in silhouette!

Here is my opinion.
First off, I dig the concept, I think it has loads of potential!
The rocks on the ground look flat, mebe play with displacement modifiers, or just cut to the chase and sculpt them. But they are the first distraction.
Second, I would comment on the wood posts. They could really be helped by a normal map. They look cartoony right now… I don’t know if that’s what you were going for as the rest of the scene is slightly stylized… which most “realistic” renders and photographs are stylized!
The grass in front looks flat. Mebe if you backed the camera off then used a longer lens and used some depth of field it may work out… Something to play with.
I dig the yellow lights with the green colors. they work well together. but in my opinion the placement is fighting for the viewers attention. From how the scene is layed out and leading lines I’m guessing you want the viewer to look past the bridge into the murky depth. Mebe bump up that dim light that’s on the far end around the corner and remove the round light things or hide them in the underbrush.
theres a little bit of a halo around the lights, mebe add a bit more “glare” in compositing.

Overall, I like it. Which is why I commented! lol! Good start you got going!

Your scene looks awesome, but could be improved. Check out this article at blenderer.com, I think it would be useful to you.