This piece was inspired by a trip to the Newport Aquarium just outside of Cincinnati where they have 2 of only 5 sharkrays held in captivity. I was so taken by the power and beauty of these amazing creatures that I decided to create an homage to Sweetpea, which is the older of the two that they have.

The entire scene was created with Blender 2.5 alpha 2 and Gimp, Gimp being used for some of the texturing of the sharkray and for some color correction and the addition of the sunrays at the end. Whole thing took about 16 hours but I am very happy with it. 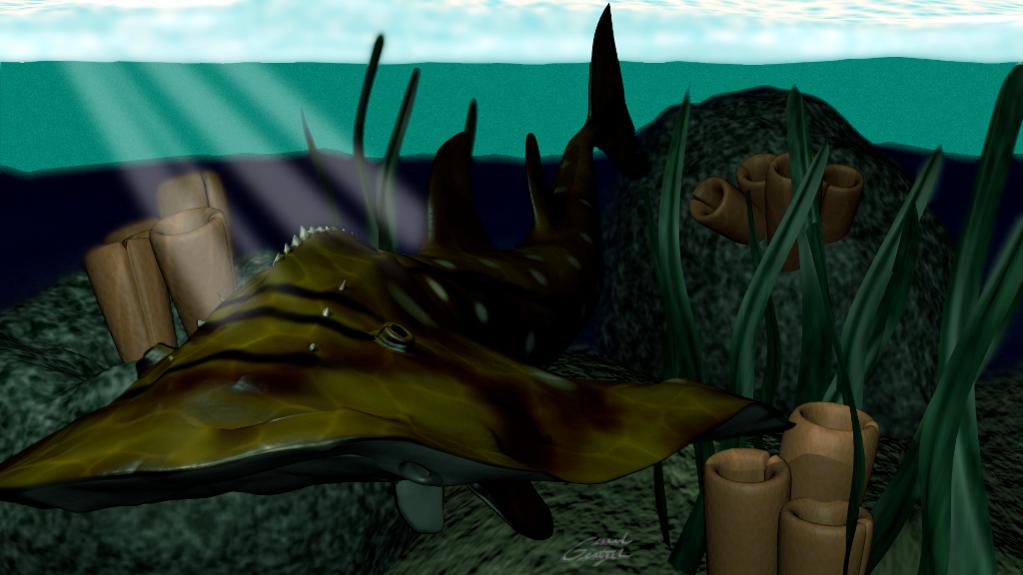 I dont know if i could do better , but i don’t like it

It look’s like something from many years ago… :s

You need to do something to bring out the sharkray. I can see it, but the plantlife gets my focus.

Other than that, look at your shader options. Lambert is not the only shader. And think about Specular levels. Also bump-maping above a certain level becomes meaningless.

Sweet pea (Lathyrus odoratus) is a flowering plant in the genus Lathyrus in the family Fabaceae (legumes), native to the eastern Mediterranean region from Sicily east to Crete.

Sweet pea (Lathyrus odoratus) is a flowering plant in the genus Lathyrus in the family Fabaceae (legumes), native to the eastern Mediterranean region from Sicily east to Crete.

Ok. It’s also the name of a female sharkray in Newport Aquarium. http://www.newportaquarium.com/surroundedbysharks.cfm

Great work man, little lighting and rendering issues, this probably could use some compositing help, but overall it is a nice scene. Complete scenes like this, are much more difficult IMO than a simple model. It’s the first step towards making a real animation. Keep Blending it up!