Tought to make a WIP thread for myself too as I think I’ve got far enough that I might actually even finish in time, and there would still be time to tune my ideas based on comments

So I’m going to go bit imaginary scene from System Shock 1 or 2. My Basic idea is to show the main character “The Hacker” just at the moment when the Antagonis Artificial Intelligence S.H.O.D.A.N has spotted him and ejected him from the cyberspace, with a nasty electrick shock to accompany him. Want to create the area to look like a large control center, and to show the Shodans omnipresence on the screens.

Anyway scetched a rough doodle first about the general outlook, and started to work on that.

Here is the initial scetch I made, 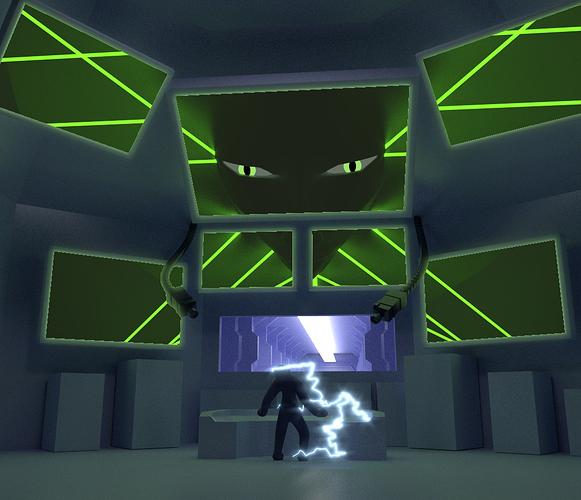 And here is where I’m Currently: 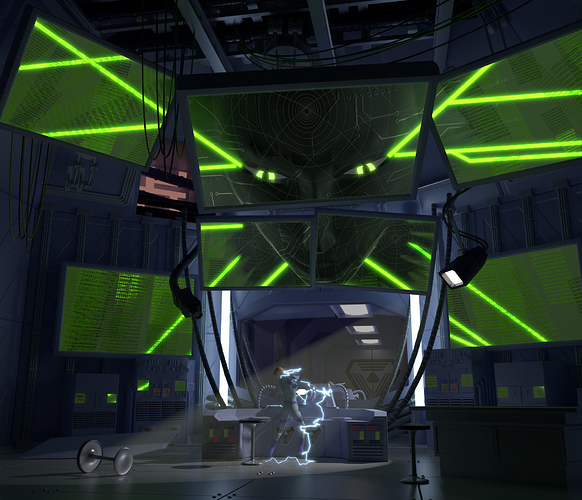 Things to do still (at least):

Any Comments, Critiques and ideas are appreciated

The detail in this is really good! Can’t wait to see the final image

You shouldnt have to use strands for the hair. You won’t notice at that distance. Use poly hair.

Maybe add a slight glow to the lights in the hall.

Try turning Ambient Occlusion on to help with the shadows that you want. Start with a lower setting so it doesnt blow out your scene.

Other than that I think it looks pretty good. Cant wait to see it fully textured!

I’ll do my best to get this one finished, have to pinch time for it somwhere

@loonatik503:
Thanks for comments and suggestions,
I’ll pay some attention to the balance between green lines and eyes, I think you are right the eyes could be more pronounced there, also the polyhair is propably good idea, we’ll see how it turns out, haven’t really tried much any kind of hair before

I’ll also look at the glow in the lights bit later once I get some more texturing to go, have tought to put some dirt on the surface of the lamps, we’lls ee how they look after that.
And the ambient occlusion is a great idea…actually feel quite stupid that it didn’t ocur to me before. I kind of forgot the whole consept once moving from blender internal to cycles… have to try it for the next step.

WEll here’s the current image for the nights render. Mainly just rigged a bit the Hacker…(still not good) and tuned Shodan a bit, added wires, shaped abit and tried to add some binary texture for her. (wen’t bit overboard with that, have to tone it down for the next iteration), also I think the weires came out too… real. maybe I tone the reflection to minimum, maybe add some transparency… any thoughts? 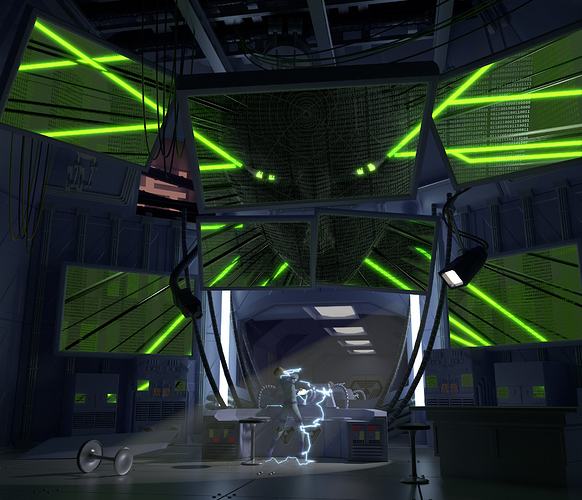 I would get rid of the projector light, darken the background forms and make the screens and the electricity your main source of lighting. It would make the scene more moody.

I hope you will run this through the compositor afterwords, you can get some really cool effects going.

I would get rid of the projector light, darken the background forms and make the screens and the electricity your main source of lighting. It would make the scene more moody.

I hope you will run this through the compositor afterwords, you can get some really cool effects going.

Thanks for the comments Astapov, I have kind of mixed feelings for the projector light myself. My initial idea was with that to enhance the feeling that Shodan is in control of everything electrical on the room, and focused on the Hacker. But At the same time i think it kind of breaks the image’s contrast and mood. I guess I will try a version without it, and figure out something else than the light for Shodan to control there.

So far I’ve put the image through compositor mainly for combining two layer (real world / cyber-space) and that volumetric light from bi scene (as couldn’t make that in cycles), and for adding glare for those green lights and lightning. I haven’t explored much on the possibilities of the compositor tho, do you have in mind something specific that could be experimented with this one? I’d be interested to hear any ideas:)

No updated image for now. Last session went mainly when I tried to add pipes and wires for Shodan, and tune them to look more what I like. The scene end up crashing blender all the time for OpenGL Timeout from my graphics card. Took pretty long for me to figure out a way over that problem, and once I managed to do that, the rendering still took more than the night to finish… (I had to tune windows registry to get the timeout limit longer, can give more details how to do that if someone else has experienced this, once I get back to my own computer to re-check how it was done)

Ok, here’s the current one. Tuned mainly the cyberspace, added pipes and changed the wires pretty much compeltely. I think I’ll keep that one like that for a while and try to work the “real-world” next, as with all those pipes the rendering took something like 18+ hours.

Allso tried to tinker with ambient occlusion, but didn’t get that good effect yet, I’ll keep experimenting with that. 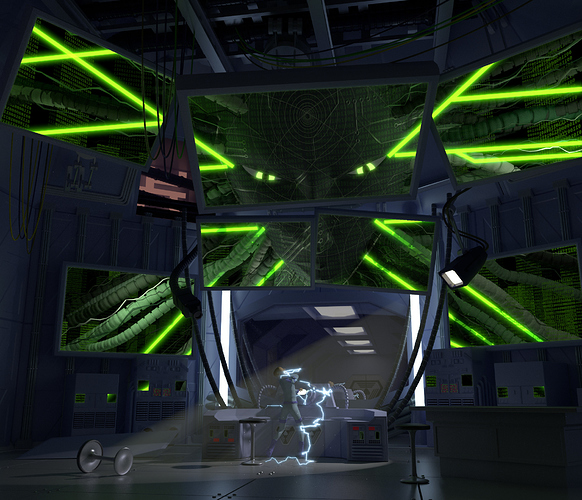 Slight update for the progress:
Mainly started to look on the “real-worl” materials, moved/reshaped thing or two and get rid of the halo on the projector-light. Still lot to do for the materials, and the charater. 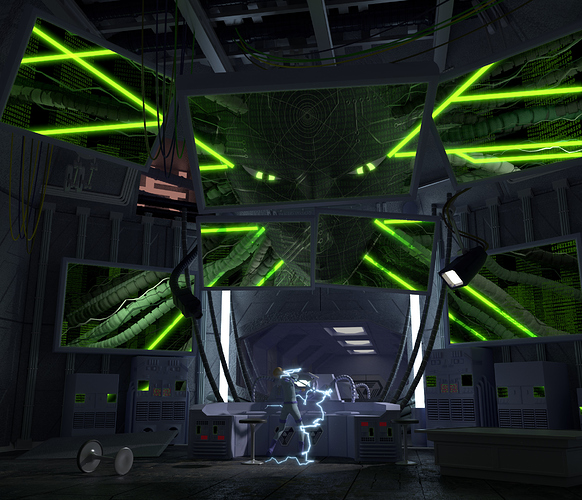 Excellent work, I very much like your progress! Shodan is so… Shodan now

Keep it going, it’s getting better and better with each update. My only major complaint at this stage are the sparks. Realistically, they should give off a pretty powerful light, and result in very sharp shadows from The Hacker and nearby stools. I don’t know if you had it planned, just thought it’s worth pointing out.

I wish you best of luck in the competition!

Hey, thanks Stan, nice to hear that you like it

and yeah I hope to get the spark/lightning hting create stronger light/shadow, so far haven’t managed it yet… lightning is still something I should learn one day

I never heard of this “System Shock” before. I think this could be one of the finalists for this contest.

Thanks a lot XeroShadow and Wakarius, It’s always nice to hear people like my attempts in art

and Xero, if you haven’t heard of System Shock, it was at its time a ground breaking action/asdventure/roleplaing game. One of the first first-person-games witch wasn’t really just a shooter. And Shodan is the_most_scaring_AI ever. Still have shivers when thinking her distorted, echoing voice

definitely in my top-10 games ever.

System Shock is a 1994 first-person action-adventure video game developed by Looking Glass Technologies and published by Origin Systems. It was directed by Doug Church with Warren Spector serving as producer. The game is set aboard a space station in a cyberpunk vision of the year 2072. Assuming the role of a nameless hacker, the player attempts to hinder the plans of a malevolent artificial intelligence called SHODAN. System Shock's 3D engine, physics simulation and complex gameplay have been ci...

ANother update,
mainly changed some details on the scene, made more materials, and decided to try some opinter-lasers for the medical-table-to-be thing, tinkered with the window… details here and there.
Still to do, The Hacker is propably most nfinished part, also materials are largely non-ready…hope to have time to get enough wear-and-tear or something to make them look believable, and the lightning is still kind of questionmark.

as always, comments and qritiques are appreciated. 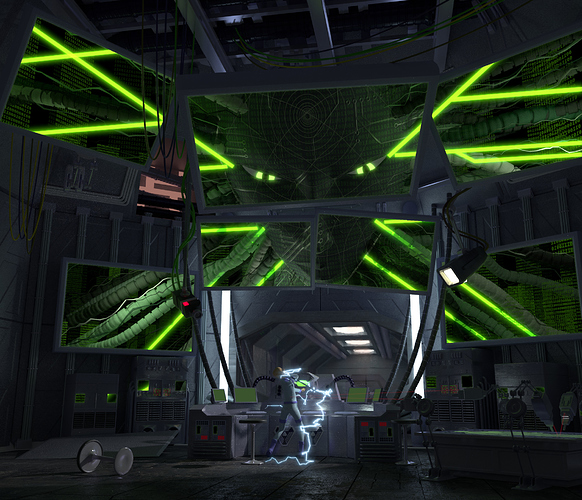 This is looking amazing

I love the detail that you’ve put into this scene!

Thanks Nathan, I just hope I haven’t bitten too much, so that I can actually finish it in time

Thanks, Adam, I tried to tune theambient occlusion a bit, same as other lighting too.
This will be pretty much final version, I still might try to do some post processing at the evening, and maybe try to render it once more still for the real-world part. There are tons of things I’d like to do for it, but no more time to work before deadline. Would still be nice to hear some comments and possibly ideas for the post processing tho 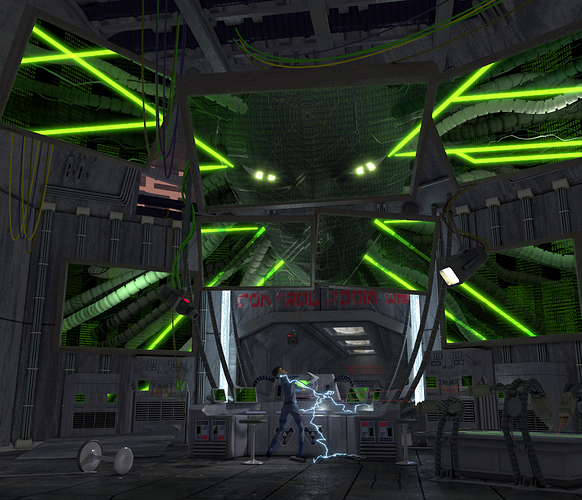 Okay, time starts to be up, I think I call this one finished.
Thanks for everyone for the comments and support, they did make the end result better 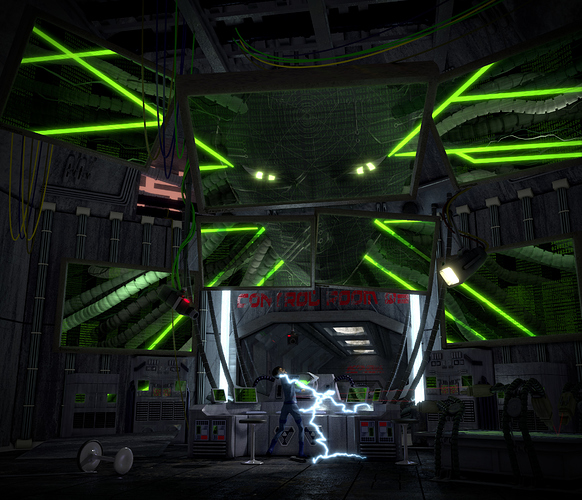 “Look at you, hacker: a pathetic creature of meat and bone, panting and sweating as you run through my corridors. How can you challenge a perfect, immortal machine?” -Shodan
next page →