This was something I did to learn Blender 2.80. Nothing too fancy, just didn’t want to get bogged down in a more complex weapon and end up shouting at Blender…‘BUT I CAN F**KING DO THIS IN MAX WAAAAY EASIER!!!’…
There were a few crazy moments when you keep stealing a glance at the Max icon on the windows start bar, but all in all Blender 2.80 was a very smooth learning curve coming from Max. Actually quite similar in a lot of ways. I’ll definitely be using 2.80 one way or another in my workflow in future projects. 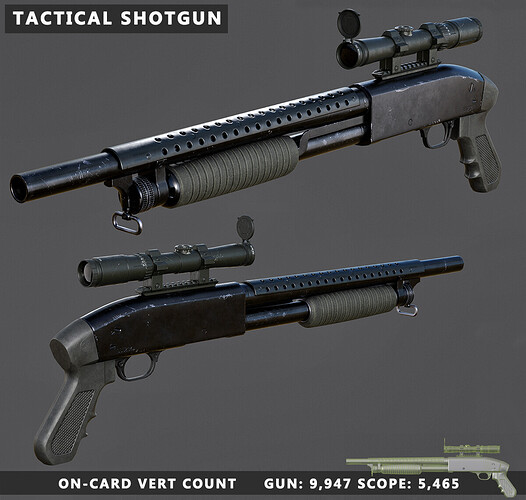 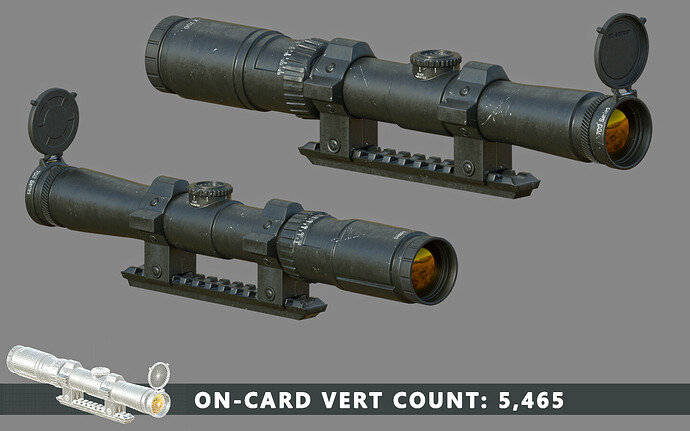 Kick the habit Danny; we’re all pulling for you.

Out of interest, what did you find more difficult? I’m in the same boat except I’m cold turkey.

I can see foresee a future that Blender features heavily in for me though.

It’s not that any one thing was particularly hard, it’s more a mindset of getting used to/developing a new workflow, having spent the last 10+ years working every single day, almost, in Max and having a rock-solid workflow over there. I was so surprised, though, at how easy the 2.80 learning curve has been.

One area that I didn’t enjoy at all in this project was Blender’s unwrapping tools. It is very weak in that area. I’m one of those weirdos who loves unwrapping, but this was no fun.

There is definitely a different logic to Blender than Max which can make it a peculiar experience switching but in fairness, sometimes I much prefer Blender’s logic.

The fact that armatures have two different modes, one for rigging and one for posing is just… so good. The number of times I farked a Max rig by forgetting the little red button and sometimes undo wouldn’t even solve it if there were funky controls.

I think it’s the little things that slip you up, too. I remember being aghast at how many delete options there were; I didn’t really even think about Max’s behaviour but it obviously has some context built into it which I didn’t appreciate at the time.

What could Blender devs do to improve the unwrapping, do you think?

Yes, there were definitely a few initial concepts, different to Max, to get my head around, but I’m much more comfortable now in Blender. Alot of the time the modeling can feel much smoother and less clunky than Max can be at times. Also, the fact that 2.80s viewport shading is beautiful to look at doesn’t hurt either.

The Delete thing was a bit weird, but I’ve set some hotkeys to remove edges, delete faces, and turned off the object confirm Delete, all of which has made it a bit more like I’m used to in Max.

As for the unwrapping tools, it’s not that much that needs improvement, but it’s those 5 or 6 tools that make or break a workflow. There are a few addons to really improve this such as Textools and Packmaster, but if I do eventually move out of Max I will replace the unwrapping tools with Rizom Unfold3D and a Blender bridge. One thing I don’t miss in Max is that unwrapping is in a modifier and you have to collapse and reapply to edit geo.

Never tried Rizom myself, I might look into it. I don’t do any serious modelling in Blender but I do unwraps with it so that might be a good alternative if it is better.

What program are you doing most of your modeling in? Rizom Unfold3D is pretty much the industry top dog for unwrapping, with Maya looking pretty good too as some of the Rizom tech has made its way in there.

I’ve gone Zbrush native. The live boolean is just delicious. The new Zremesh in 2019 and dynamic subD are also incredible for working with hard surface stuff as well. Nanomesh and mesh insert curves are also nice too and surprisingly versatile. Though I’ve had nanomesh kill Zbrush a few times. I’m even using Zmodeler now, to my own surprise. Though it has a menu devised by Satan himself, it’s amazing what you can get used to.

I should have said that I still do some low poly stuff in Blender but it’s a mix of Zremesher, Retopoflow and bog standard Blender poly pushing for me. One of the big reasons I was comfortable ditching Max is because most of my serious work wasn’t done there anymore anyway.

I just watched a Rizom video. How did I miss this? Definitely going to pick it up, especially since there’s a Blender bridge. I think that’s the way with Blender. It can do pretty much anything as long as it has a little help from addons and other programs.

I do love it, but for the game dev work I do it can not replace a traditional 3D ‘hub’ program. It’s fantastic for organics, characters, concepting, ideation, etc, but not suitable as a replacement for hard-surface production asset creation with Max/Maya/Blender/etc.
I do enjoy messing about in Zmodeler and still use Zbrush as a big part of my pipeline. On my Youtube channel I have over 100 tutorial videos with a shit load of them featuring ZB hardsurface/Zmodeler.

Rizom has been around for YEARS, but recently made a splash again with some rebranding. It is a great tool.

Woah there grandpa, no need to pull rank.

not suitable as a replacement for hard-surface production asset creation

Don’t tell Pixologic that. They’ve been working very hard to make it one. I do feel some things hold it back, to be fair. Not being able to have objects with their own pivots and axes for symmetry is annoying, and not having real instances is also a pain, but there are ways around it, nanomesh can do some of that. The absolute crack would be the ability to clone groups as instances. Zbrush 2030 maybe.

You’re right about the necessity of a hub program though, for me it’s mostly rigging and animation related but also pre-rendered stuff, happily Blender is pretty top tier at most of those.

The main problem for me with ZB and production assets is that n-gons are illegal geo so if you’re zmodeling it’s severely limiting. As for the hub, trying to organise a high/low asset set with 30 or 40 pieces is a nightmare in ZB compared to Max/etc, and then there’s the scale and I rely on modifiers in Max for non-destructive iteration…etc. But, in fairness, it was never meant to be a traditional DCC and that has a lot to do with why I’ve always loved the program.

Oooh. I do miss a good modifier stack, nice and tall like a gourmet burger. Probably the thing I miss most to be honest. Blender’s modifiers are a mixed bag.

I don’t know if Zbrush will ever get modifiers per se but it kind of does without it being explicit in some ways. In Max Dynamic Subd would be a modifier and maybe nanomesh too. It’s just that in Zbrush they’re scattered around the interface.

You’re right about the n-gon situation, I don’t use Zmodeler for late stage stuff but for blocking out, it’s not bad. Don’t you find that folders make it a bit less of a nightmare in terms of organisation?

I take your point that it’s not where a hub program is, but I appreciate the lengths they’ve gone to to make it a bit easier on guys like me that use it to make highpolies.

Is there anywhere you write about your workflow? I checked out your YT but you don’t post there much anymore it seems?

cool render, but what is the point of having a goggle on a shotgun ?

ZB might not have modifiers, but the deformers added in recent versions were a really nice addition and about as close as it gets to mods.

Yeah, I’ve been crazy busy and haven’t posted any new content on my YT in 2 years.