These are the last two queens in my Tarot series, I felt like I was 1/2 spamming posting them individually so I am going to post them in sets from now on… 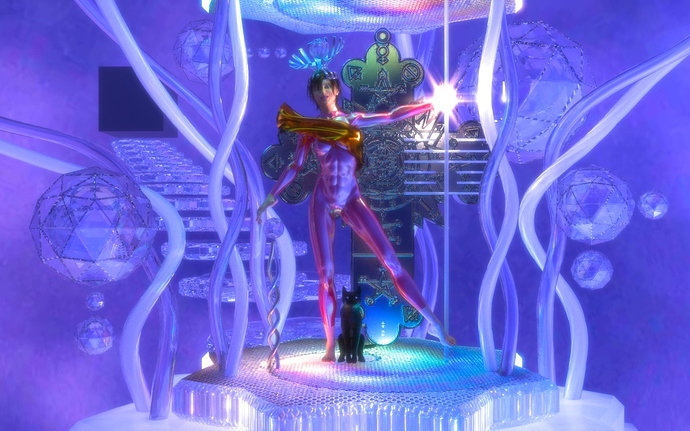 These were both rendered using LuxRender v0.6 Release Candidate 3 - Windows/Linux/MacOSX

I really like the queen of wands, The high res is not very sharp though, Lux Render? Blender internal has come along way, Are you using nodes?

no, I am not using nodes

I agree that BI has come a long way, some of the recent posts are amazing, the only reason I stick with unbiased rendering is because of the “mystical” issues.

At this point its hard to tell if a photo-real image is biased or unbiased, I use unbiased even tho for example the Queen of Wands took almost 100 hours and its Still noisy, I could use a biased rendering to fool the eye, but it would not be “internally pure” etc.

I plan on personally implementing a unbiased rendering eng for 2.5 or whenever the blender render api is complete if someone else does not do it, so in the long run I do expect to return to using the internal rendering eng in blender at some point.

Queen of wands is a win. Haven’t seen that kind of image since the 80s.

ah thanks for saying that bigbad, that is the kind of feel I am going for hopefully, maybe even hints of Ken Russel or John Boorman

Very nice! The Queen of Cups reminds me of Atu II (The High Priestess) from Crowley’s The Book of Thoth.

thanks Nyrath, I agree, I used Crowley’s description of the queen of cups specifically for this one and I notice too the similarity with the High Priestess, both forms are “clothed or veiled in light” and reflective, visionary, I added the light inside the bowl she is holding to refer to the fact that she sees visions in it. She is not quite as virginal and abstract as the High Priestess which is a more “pure” manifestation of ISIS etc, anyway, I am looking for forward to doing the HP, and thought about it often when working on this one.

Very Nice! I personally like the queen of cups more, maybe its just the calmer feel that I get from looking at it. The old school dance floor look in the queen of wands makes me a little nauseous from all the bright lights and color. Now I will proceed in looking at the rest.

Thanks for looking Shadow, the queen of cups was in fact meant to communicate a sense of a calm visionary woman, the mother of emotional imagination, I am glad you got that impression from it, the queen of wands relates to the fire element which in some modes does not understand the subtle elements of life, so the “disco” floor is part of that, so its intentionally “pushed.”

This is the last render you will ever see from me, good by, my website will go down soon also, personally I am sick of this crap, anyway…

gee, sorry to hear that Carbonflux. I hope everything is OK.

i’m guessing something rather traumatic happened between 2:53 and 4:41 on june 11th…

I am going to keep going, I just had a moment of massive frustration and felt like giving up on everything, the idea of doing 78 of these things overwhelmed me in the face of some problems I was having with luxrender. These renders normally take between 50 and 100 hours for a single image, restarting something after 24 hours because of a tiny error at times feels like a kind of pure thing to do but sometimes it makes me crazy.

Doing art is kind of emotional for me, please forgive my outburst.

Art makes me emotional too. I think sometimes when things frustrate me when doing some drawing, or painting,it gets difficult and overwhelming since something is off and I still have parents that disregards what I love and yells at me to do something productive, while I spend another few hours erasing and redrawing that makes me want to throw it out the window, but I still feel sentimental about it so I keep going on, so yeah I feel where your outburst is coming from. Your renders are at such a high quality, it’d be a shame for you to stop.

I know what you mean about doing something “productive” I even sometimes get stuck in a guilt cycle almost as if I am wasting my time on something that has no value because its hard to find the value in art when you look at it directly, yet we live in a media driven culture and paradoxically I would argue art rules the world in some ways. The level of art determines the level of culture in terms of history also.

Anyway, I don’t dare stop working on these because as you know I am sure one is even more unhappy leaving ideas to rot in the mind.