Hey all, This is a character I’ve been working on for a bit now. It’s basically done but I’m not super happy with how it turned out. What do you guys think?

Any issues jump out at anyone? 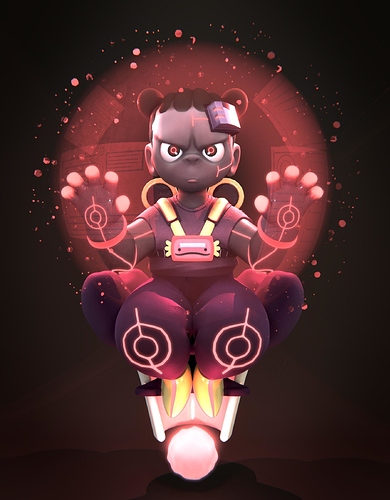 When trying to address “something is off” problems, one of the most important things to clarify is the goal. What do you want this picture to be? How do you want it to feel? What’s the story you’re trying to convey? Without knowing the goal, we won’t be able to help you get there.

The very strong overall composition symmetry makes this feel very formal; More like an icon than a scene; Almost religious, like this is a computer deity of some sort. If you want to push that angle, connect the figure to the rest of the frame. Right now she (he? the pre-pubescent cutesy andro look also lends itself to a reading as a supernatural character) looks like she is trapped in a light-bulb, which fights with the deity angle (why trapped?), and the dark surroundings (why so dark?).

If I could suggest just one improvement, it would be to set this against a constellation of data node graphs, instead of the blank grey you have right now.

Thanks for the feedback I really appreciate it! I guess part of the problem is I went into this without a clear goal. Primarily I just wanted to practice my modeling and character creation capabilities.