Hello!
Here is my “LODShader”

This shader handle the terrain LOD. It uses real-time displacement in order to display more polygons near the camera, and less polygons far way. This allow you to make huge open world for your games! Or at least, big background for your games.
It’s still in developpement, but I hope it already could be useful 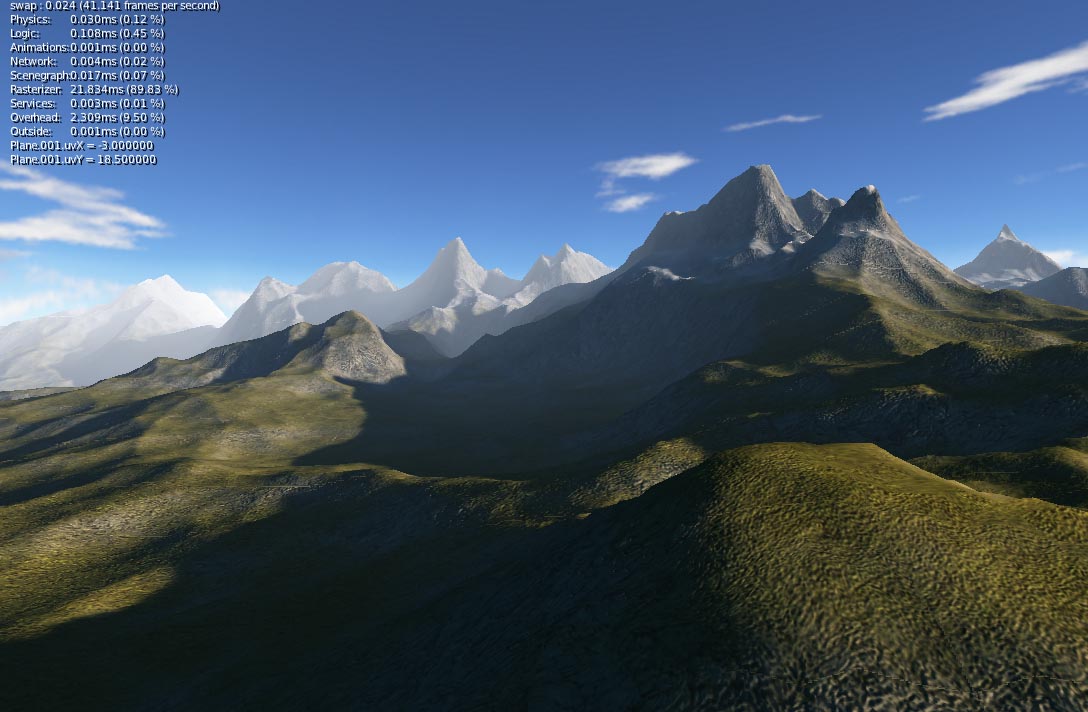 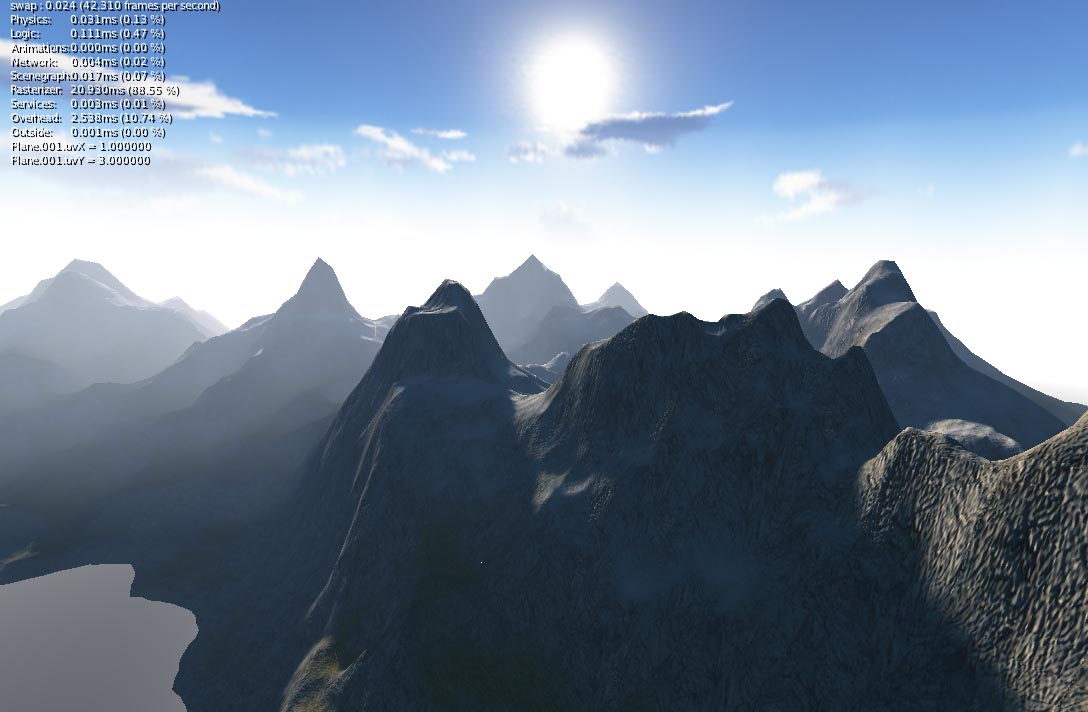 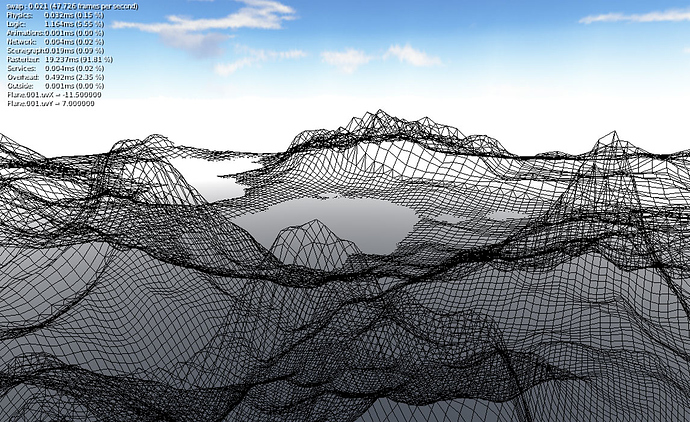 What it can’t do:
- cast and receive dynamic shadows (you have to bake them)

In what kind of game I can use it:

How to use it:
As I said before, it’s easy to setup. Easy, but not obvious… that’s why I made this little tutorial…

How to use it

0. Import the shader in your blend file.

1. Create a plane. Unwrap the UVs, then subdivide the plane. Subdivide the center many times to get something like this: 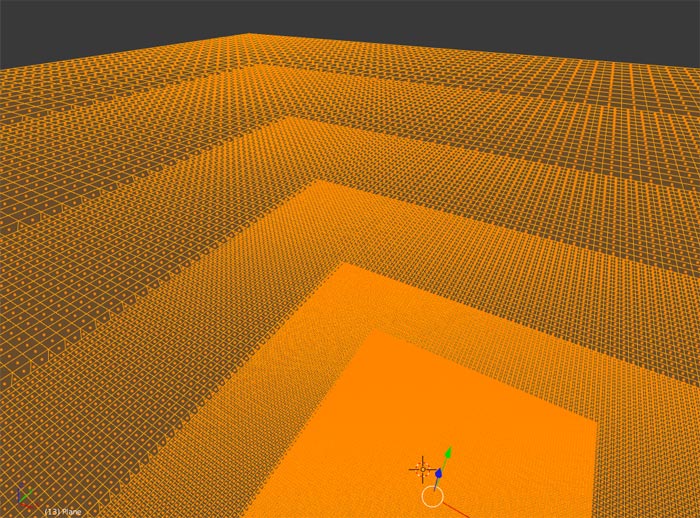 2. Create the following games properties on this object:
They will make the LOD to work properly 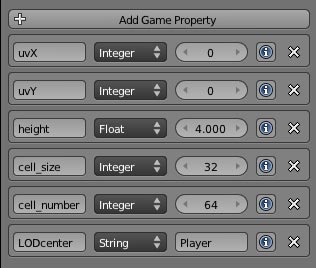 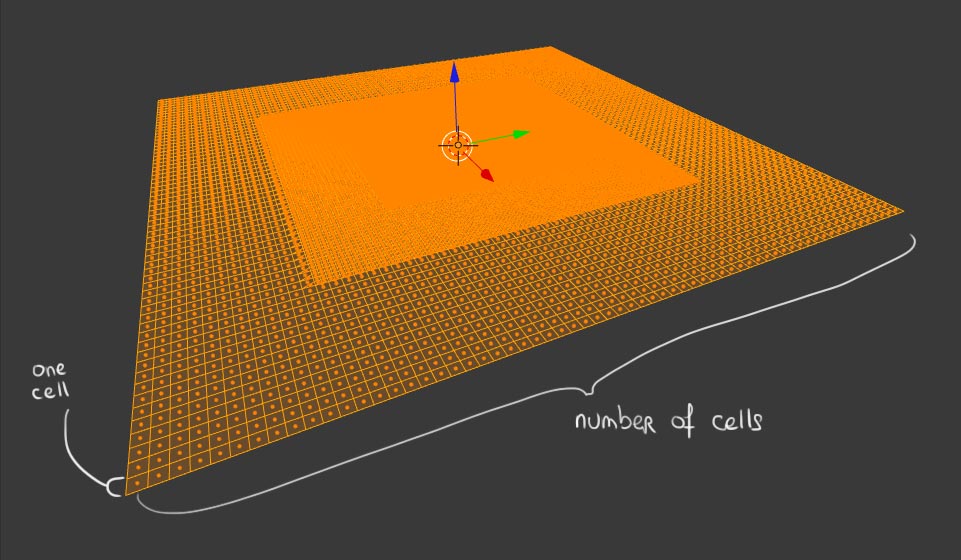 3. Setup the logic like this (it will call the shader):

First create your textures. You can use these textures:

As you can see, you don’t have to use all of them, but if you don’t, you have to provide something instead to the shader, otherwise it won’t work at all.

Now you have your textures, we have to give them to the shader. This is the tricky part, but don’t panic, it’s very easy. Custom glsl shader does not accept a lot of textures. In order to make this shader the most compatible possible (with GPUs), we put all these textures in 4 files.

Create a new material, and place your files in the texture panel in this exact order: 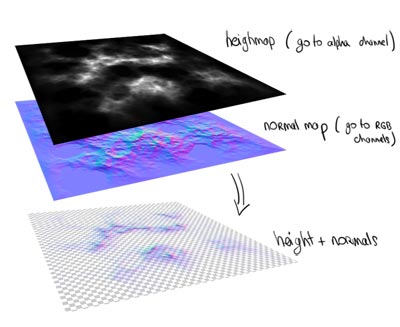 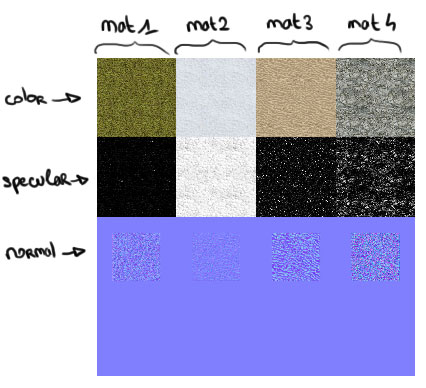 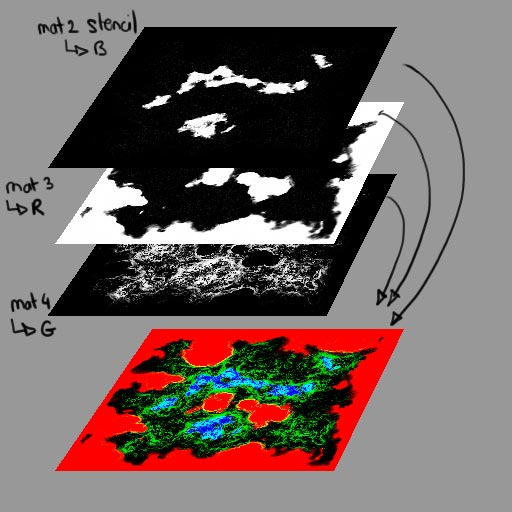 5. Adjsut the material in the shader.
Go to the text windows, open the shader, find the “variables to tweak” area.

Most of the parameters speak by themself. If some are unclear, change values and you will see the changes. All the values are float so take care to write “4.0” and not “4”.
Only the “margin” value may not be obvious. Because all the material textures are placed on the same file, tiling artifact may appear. To avoid this, place margin around your textures, like this:

In this example, I choose 0.6 as a value, but you can basically scale your texture like you want.
I suggest you first not to make any margin around your texture, and then change the “margin” value directly in the shader (from 1.0, decreasing step by step) until artifacts disappear. Then scale your textures acording to the value you found.

6. Run the game and enjoy

Please feel free to ask if I am unclear!

Feel free to use the shader, share it, improve it !

And please let me know and see if you use it for an actual game :]

Okey, then the .blend demo file… HERE (26 Mo, tell me if I forgot to pack something)

Laser blaster also made a version that support multilights: HERE(you may have to tweak some little things in order to make averything works properly, look at posts #41 and #46 if you have some problems with this version)

Let me know if it works for you (what fps?), if not what’s your GPU specs… 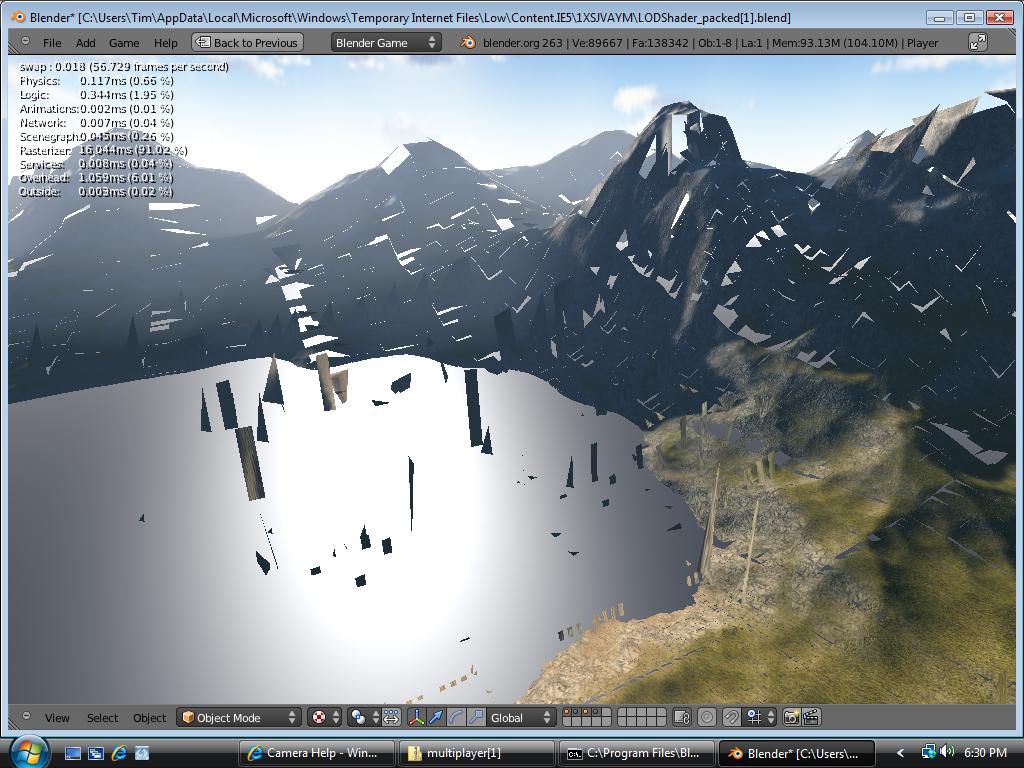 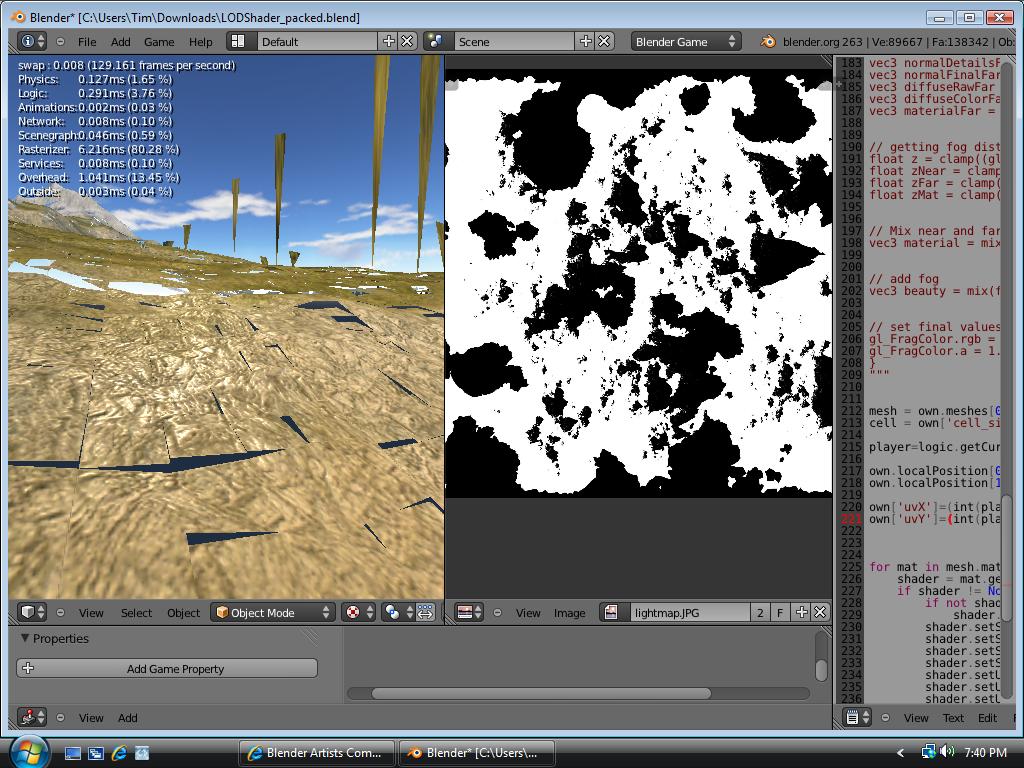 The shader doesn’t work for me at all(everything is transparent). But I’m sure its fixable. It’s probably some miniscule error in your shader code that my gpu driver doesn’t like. I’ve had this problem before. I’m currently going though the code, seeing if I can find any problems.

Thanks for posting this, though.

@ Superflip: Hmmm… I wonder if that’s simply a precision problem with your gpu, or if there’s some sort of compatibility issue at hand.

EDIT: I managed to get the shader to work properly without BGE throwing any errors. However, my poor old relic of a computer just can’t handle the strain. Instead of 30 frames per second, my framerate is more like 30 seconds per frame. It also crashed my computer after a while… I’ll see if I can change anything to improve the situation.

EDIT 2: Okay, I don’t think there are any errors in your code. The problem is my ancient gpu. It’s an Nvidia GeForce 6800, and has limited support for vertex texture fetches. I did a bit of research: (For vertex texture fetch)Gf 6 supports only GL_TEXTURE_2D of format GL_LUMINANCE32F_ARB and GL_RGBA32F_ARB. It doesn’t support any of the other floating point formats or fixed point formats. There is no floating point compressed format.All other formats besides GL_LUMINANCE32F_ARB and GL_RGBA32F_ARB cause the VS to run in software mode.

I assume Blender doesn’t use either of those texture formats, and that’s causing the vertex shader to run in software, thus the massive slowdown.

This is a very nice shader you’ve created. It’s a shame I can’t really use it.

It seems that Blender uses GL_ARB_multitexture… (which is already deprecated).

The only thing you can do is to update your GPU driver, but I guess you already did.

@ super flip: nice glitch… I have no idea why ! Maybe code should be changed for ATI card ? Like laserblaster said, its looks like everything works fine except some precision

super flip: nice glitch… I have no idea why ! Maybe code should be changed for ATI card ? Like laserblaster said, its looks like everything works fine except some precision

I checked my video drivers to make sure they were up-to-date, To my surprise they were not. After upgrading drivers it works perfectly without the glitches. And a smooth 100 + Framerate at any zoom, orientation level even on my ancient machine. Nice Job.

No. If you want the shader to work in 2.49, you’d need to modify the Python script to be compatible.

And if you want the demo file to work, you’ll need a version of Blender that has Bmesh(2.63 and above, I believe).

@superflip : hey im happy to know it works well for you too ! Whats your gpu spec?

@laserblaster : actually the python part of the script is very small, it should be very easy to change for 2.49… I should make a 2.49 compatible file…

Does it work for someone else?

It’s quite beautifull by the way, and it would look even cooler with the day/night cycle skydome.

@superflip : hey im happy to know it works well for you too ! Whats your gpu spec?

For me its working very well! I just cant move forward, but that is ok

For me its working very well! I just cant move forward, but that is ok

he did not use A, S, W, D to move the camera, try changing its logic brick 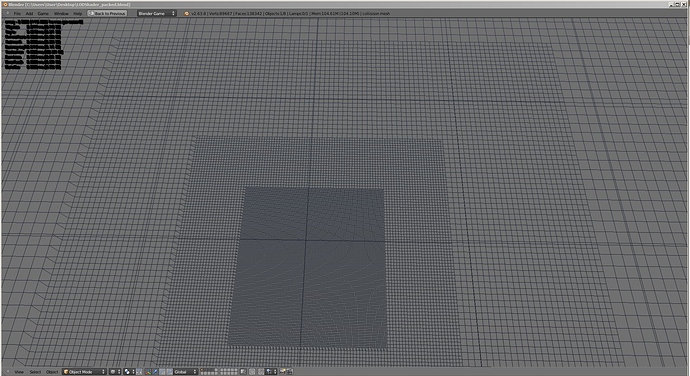 No, it works fine when you press ‘p’, you just have to make sure your viewport shading is set to ‘Texture’. This is seriously impressive benj. I get a nice steady 60fps with this, even with martinish’s DOF shader running alongside it. Fantastic work. Are there many more improvements to be made with this, or is this almost done? 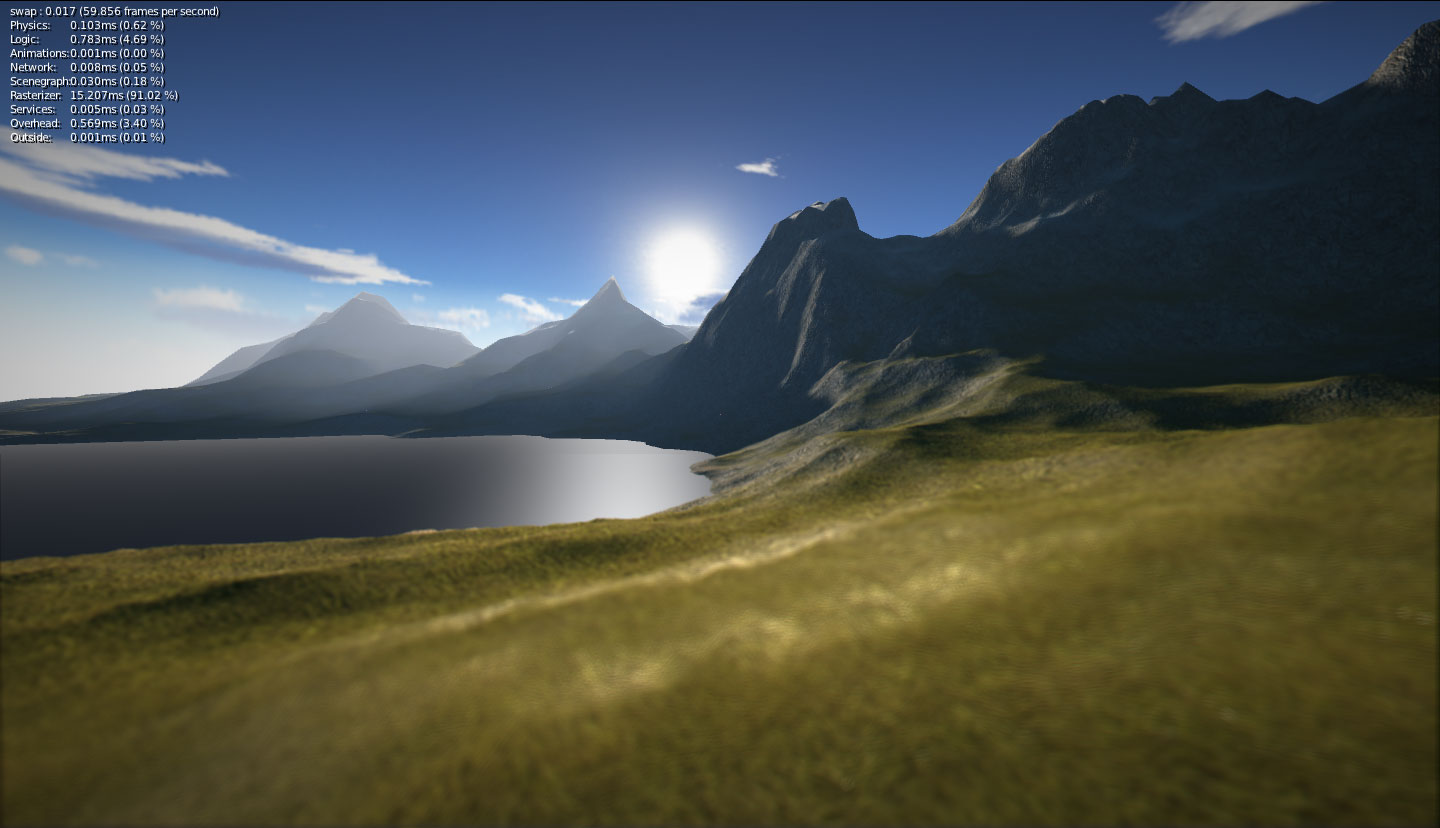