As stated, As a test, I purchased a couple of Luigi Marini;s landscapes scenes from blender market, to try and speed up work flow. Luigis’s created quite a few quite large scale landscapes, up to 2K x 2K areas. And having spent many months working on various character rigs, I now sought 3d backgrounds rather than 2D ones backdrops I’d been using to make short animation test clips.
I’d rather spend time on characters, animation, and setting, rather than trying to “world-build.”

So fast forward to Luigi’s “Forest Spring” scene. Which cost $12.00 - pretty cheap.
The scenes have created detailed rolling hills, along with 3d landscape "backgrounds to all the staged camera shots. So far, so good.

his procedural, displacement mesh terrains. are populated with trees and grass assets. Rocks, gravel, boulders, and Haze atmospherics. All built in Gaea, a landscaping “world builder” program. From which he ported the scenes over into Blender.

Nicely, there are “pre-staged” cameras salted throughout the landscape - positioned to capture interesting land features, path of travel, or record action.

So, I gave the “forest spring” a test run. Annddd … nice. Really nice, and simple.

In fact, I quickly discovered one camera angle suiting my interest. And so I expanded on that particular region of the landscape. Throwing in a couple of botaniq trees for variety, adding some rock assets bought prior at blender market. And then I imported an OBJ tree to give a more rugged look to the surroundings, to make it less park-like.

Overall it was a successful (IMO). And opened up a lot of potential. As my goal is creating a series of landscape action stills, (Remington-like) with posed characters. Including a dozen 6-7 second video action clips. So to my mind, Luigi’s landscape scenes are proving sufficient “in-look” for back drops. The one drawback, however, are the 3d sets are very dense geometry and weighty. However, I have a GTX 1070, and it’ll generally chugs along as long, pretty quickly keeping pace, as I don’t import “Millions of assets” into the viewport.

As for finished rendered scenes, This scene rendered in about 4 minutes. Not bad.

So, for more serious work, I’ll just chop away unnecessary mesh. Which I didn’t require for this render. For this scene, to minimize GPU load, I weight painted the landscape, targeting the areas where I specifically wanted plants, trees, and rocks. For one test I’ve even wire-stripped one of the landscape planes. In future work, I’m considering retopologizing the entire main terrain layer, and then building up the detail for the camera shot I need. As I do need the wider landscape perspective for some long zoom shots down to the characters.

Anyway below, is My finished rough. And yep, there’re some flaws: – in the tree textures, the placement of some of rocks (not enough randomized scatter), the stream is too bluish, I’d like a clearer stream . Also the stream banks are quite flat, not defined enough. illumination might be better. And the walking path is too regular, not spotty and overgrown enough. But I am digging the overall fee and lookl… 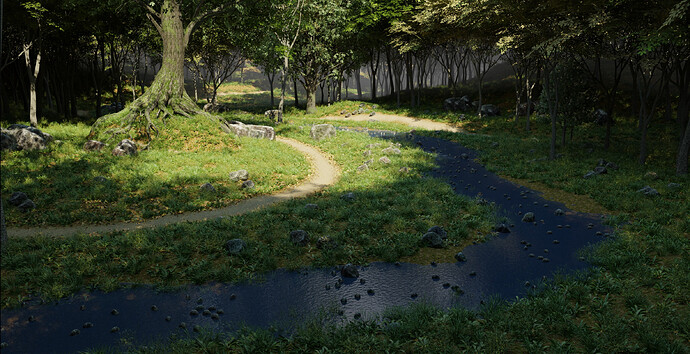