is it possible to use some greek letters for object names ect in blender script
or only std letters ?

some text editor seems to be able to use greek letters !

if possible how do you deal with the greek alphabet ?

HI… I think the answere is yes, but you must install the correct font in your SO and then load into blender… I made some similar years ago with japanese and this work

more about a data file which use text field with some Greek letters !

can python read these and pass these to blender as object name for instance ?

can it take it or need to add some new alphabet may be to work with greek letters ?
Greek letters are part of the extended ASCII

not certain it will work for all letters !
or may be convert to some other letters

I think the answer is yes, but you should test with all letters 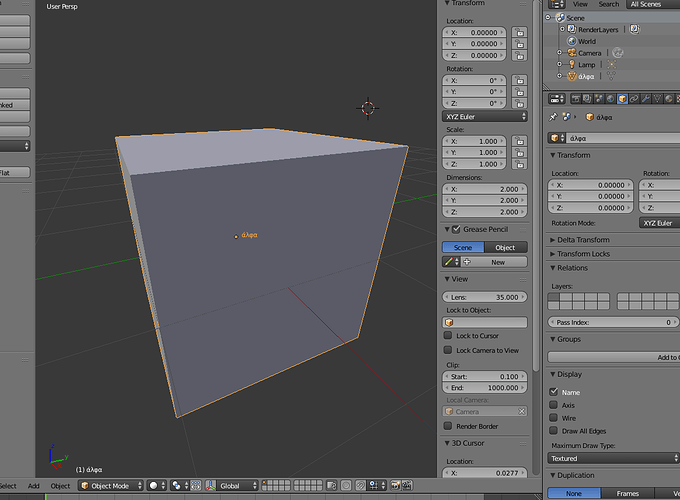 so is it possible to show all the greek character for ob name?

You can enter Greek characters at once, Blender supports utf-8 encoding.

However if you want to read any text file from your disk, you will have to be sure that the file is encoded as utf-8, otherwise you will have to manually change your system locale (which is not practical).

You can convert the ANSI to UTF-8 for example with some text editor, do not save directly though if in any case the characters get corrupted and you loose the information.

Does this answer work? :eyebrowlift:

how do you enter the Greek letters on console ?
do I have to change the win code thingy and how ?

same problem in a txt file !
I mean I can make file UTF-8 but still how to enter the Greek letter in txt editor ?

how can I save it with Greek letters ?

sorry never really tried before to work with Greek letters !

You can enter letters by adding a new “input language” in Windows, this way you can have two input language, one will be your default and the other a new one, you can switch between them with Alt-Shift combo (or additionally Win-Spacebar in Windows 8.1). Same goes for Blender either the text editor.

To add an input language, for example in Windows 8.1 you go to Control Panel\Clock, Language, and Region\Language\Add languages and you select an additional input language. Detailed tutorial can be found here: http://www.eightforums.com/tutorials/13677-input-method-set-default-language-windows-8-a.html

and what do you mean by do not save directly though if in any case the characters get corrupted
That was just only in a case where your encoding was ANSI, it happened to me few times the conversion from ANSI to UTF8 fail and loose text information (they would appear like this ???), that means that saving in a new file (without over writing the original) will allow you to test the waters. However you might prefer “Notepad++” instead as a default text editor since it’s more more powerful and sophisticated.

how can I save it with Greek letters ?
Choose only UTF8 since it’s the best choice.

do I have to change the win code thingy and how ?
You can change it as it is said here (it’s the Language for non Unicode programs)
https://www.coscom.co.jp/learnjapanese801/japanesefont/nonunicode_win7.html

However you must forcefully choose text information as UTF8 because that means that the information will be read by any computer on Earth, otherwise everybody will have to do transcodings and change settings all of the time.

I hope these information help.

P.S. Also another one, if you plan to write letters that are not shown on the keyboard, you will have to enable the “On Screen Keyboard” so you can see the arrangement of the letters.
http://windows.microsoft.com/en-us/windows/type-without-keyboard#type-without-keyboard=windows-7

i’m trying to read a data file where I would like a field to contains some Greek letters
and I want to use this field to be use as an object’s name in blender !

so is it possible to keep the Greek letters for object’s name in blender or limited only to std ASCII characters ?

I already have a Greek font for Text object and it works fine !

but this is another situation !

Have a look here: “Unicode Problems”
http://www.blender.org/api/blender_python_api_2_59_0/info_gotcha.html
“To simplify the problem for python integration and script authors we have decided all strings in blend files must be UTF-8 or ASCII compatible.”

That means that if you drop any character that is out of ASCII bounds it will be automatically handled as UTF-8 and it will be fine.

You can even do python scripting with these characters.

Datablock names support unicode, just make sure to specify the proper encoding when you read the data from your file.

just saw in user preference a var for international code
is this only for text objects
or needed also for using Unicode ?

This seems to be only for user interface translations.
http://wiki.blender.org/index.php/Doc:2.6/Manual/Interface/Internationalization

then not needed to scripts using Unicode !
will experiment next week with this Unicode way