There is no chance, end result looks like that.

We’ll see. But that spliting of subdivide and unsubdivide reminds me on uv editing where stitch and weld are in the uv menu and context menu and split is in the selection menu and nowhere in the context menu at all.

Seriously there is William written all over it. With all due respect, this looks like what I would end up with trying to parody him. Cheers William if you’re reading this, no offense meant !

Specifically I find the N sidebar very poorly organized. I see two problems, one being settings scattered everywhere with some strange grouping logic, the other being that most of them (brush settings, specifically) are in sub-panels which prevents you from reordering them and forces you to unroll the “parent panel” to reach a lone singled-out setting at the bottom of it.
I don’t think they make a lot of observations before working on those changes, they just try to semantically group things together regardless of how meaningful it’ll be in terms of workflow. I know I do a lot of back and forths through the interface for really simple stuff, and that’s not mentioning the tool/brush duality that should be solved already… Of course I make my own shortcuts and stuff, but still. Heh, enough with the rant. Apart from the pet peeves, sculpting itself feels pretty great nowadays.

I dont think its that bad idea.
Some ideas …

To be honest I think Pablo is too busy adding new features and fixing new bugs to really take the time for some serious UI / UX tuning, which is a pity if that’s the case. He should get active help from other devs, guiding him in establishing a really pleasant, convenient sculpting UX.

My main UI / UX obstacles at the moment are:

I know I’m repeating myself, but until these issues are taken care of, I think it remains necessary to keep them in the spotlight.

In general, not just in sculpt mode, but all over the UI, there are now waaaaay too many subpanels since 2.8, and most of them are not descriptive. What I mean is, you can’t predict what you’ll find inside by looking at the name. This makes the things you’re actually looking for far more difficult to find. This helps neither newbies nor experienced users (who still have to contend with useless clicking around even when they know where everything is).

He should get active help from other devs, guiding him in establishing a really pleasant, convenient sculpting UX.

This is what the UI team is for. Unfortunately under William’s leadership a lot of their designs focus on making things pedantically categorized, or consistent with terrible OS conventions instead of easy to use.

A lot of space wasted here, and generally not very practical.

I still need to catch up on the latest multires development as I haven’t followed it lately, but with apply base, reshape and an upcoming refit button it seems it got even more convoluted. A pretty good indication that there are still major problems is that there even is such a thing as a quality value. It either works or it doesn’t.

Some pretty cool stuff getting in like the pose brush or vertex paint. Not sure I’d agree with the priories, but cool nevertheless.

Haven’t checked in here in a while, but can’t believe this Multires saga is still going on. How can something so straightforward become so unnecessarily convoluted? Why they didn’t just make a separate, simplified ‘Sculpt Multires’ modifier I’ll never know. I might check back in when I have an upcoming ‘Anime girl with frilly clothing’ project coming up. Uncalled for I know, but frustrating seeing the limits of where the Sculpt dev is heading after 18 odd months.

Well, it seems like it should be. Multi-level sculpting is as old as the hills in CG terms now, and works in a simple manner in other programs. The complication arises when they are showhorning multiple workflows into what should be separate modifiers. That’s why I feel it should have been branched as use-case specific modifiers.

Specifically I find the N sidebar very poorly organized. I see two problems, one being settings scattered everywhere with some strange grouping logic, the other being that most of them (brush settings, specifically) are in sub-panels which prevents you from reordering them and forces you to unroll the “parent panel” to reach a lone singled-out setting at the bottom of it.
I don’t think they make a lot of observations before working on those changes, they just try to semantically group things together regardless of how meaningful it’ll be in terms of workflow.

I agree.
I was expecting that some of brush settings would have been transferred to Tool Settings bar and some would have stay in column.

But instead of that, we have a repetition everywhere ( Tool Settings bar, Sidebar, Right Click and Properties Editor).
We, desperately, need a way to customize placement of each element.
Choice between monolithic region is far from being what is expected.

They seriously underestimated work that 2.8 rules were implying.
3D Viewport in object mode and edit mode focused attention during whole period before first 2.80 release. And after that, work on other modes never had same amount of attention.
Brush Settings Overhaul of 2.82 was absolutely not what was requested.

I think that in Sidebar, Tool tab should be split in 2 Tabs. One for Brush settings and the other one for mode stuff (Options, Symmetry, Remesh, Dyntopo).
That would allow to avoid sub-panels for brush settings.
Just adding 1 tab should not be a complicated solution requesting a tremendous amount of work.

Internally, active tools and brushes can be treated the same.
But that does not make sense to treat them the same way in UI. Brushes have a ton of settings compared to active tools in other modes.

Not being able to reorganize sub-panels in Brush Settings panel is too annoying.
We are talking about a panel with 5 sub-panels in Sculpt mode and 8 in Paint modes.
Those sub-panels should be panels.

I was hoping that Brush Management task would help to rethink Sculpt & Paint UI. But task was postponed to next year.

maybe user customized sculpt brushes will be part of the asset manager project?

Also an heavily updated quick favourites menu might mean you dont have to look at the cluttered N panels as much.

maybe you could make the brushes on the T panel drag and droppable for the order they come in like they changed the modifiyers drag and drop feature? however that would ruin the colour/ type organisation which already is pretty good.

I don’t know how is the thinking process behind those changes.

…“Hey guys look at how sexy the UI of those 2d apps! oh boy real sexy, lets try that with Blender” I believe this is how the UI design for 2.8 came about

These UI problems all stem from a complete misunderstanding of the sculpt workflow, starting with (and most importantly IMO) the insistence that it be a modifier. Multi resolution data should be a property of the mesh, not a process the mesh goes through on every update. Sculpt changes should propagate to lower levels automatically, even if it requires modifications to the base model to do so. These two things would simplify so much of the UI/UX on their own.

Even Modo devs understood these principles when adding a somewhat basic sculpting mode, which is amazing considering the brush system and performance resulted in horrible sculpting results. Even though Modo falls short in many of the areas that Blender makes up for, blender devs should still be looking at it to see where the core concepts have been thoroughly laid out. 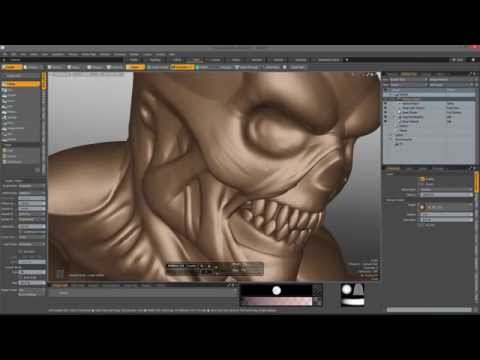 Might as well look at zbrush or mudbox as well, or even forger on the ipad. It’s a bit concerning that basically every software trying to implement sculpting seemed to work out a fairly straight forward production friendly workflow, yet Blender seems to insist on reinventing the wheel in this case. It’s almost like it’s not heading anywhere, only getting more messy. You can have all the gimmicky tools and brushes, if this is more tedious than other packages people won’t use it in production.

Let’s just put it into a separate modifier or as a mesh property as others said. I have yet to see a rigging workflow in production that would need an active multires modifier. For proxy rigs it’s perfectly fine to have a vert match for one lower subdiv level or custom proxy, if you change the model just do a vert copy.

William might be going overboard with the idea of making a new panel for something that doesn’t quite fit. You can tell his idea of a category becomes quite narrow when a panel has maybe one or two options at most. I would make the category types a bit broader at the least, but not so much that completely unrelated things (ie. very unrelated) are bunched in with each other. Perhaps if a little more organization is needed, there could be small headers that can’t be collapsed at all.

How does he categorize the content on his PC I wonder, does he have a lot of folders with just one or two files in it?

Sculpt changes should propagate to lower levels automatically, even if it requires modifications to the base model to do so.

While you’re otherwise right, doing this would be a considerable problem if what you’re trying to get out of your sculpting is vector displacement maps.

They way that was tackled in zbrush is storing a morph target, I think once there are snapshots it could just store a base as a starting point by default.

I wouldn’t make the apply base a thing just because of the odd case one might bake a vdm.