As there are a number of old school geeks present over here at Blender Artists, I figured it’d be nice to start a thread about sweet retro computing memories. Think Apple, Atari, CBS, Commodore, MSX, Nintendo, Sega, Sinclair and Vectrex in the 1980s and 1990s.

I’ll start off with my personal memories:

I grew up with 8-bit game consoles and ‘home computers’ as they were called back then. The Atari 2600, CBS ColecoVision, Commodore 64 (C128 to be precise), multiple Commodore Amiga models, Sega Megadrive / Genesis, Sega Saturn, Sega DreamCast and more.

I remember the 1980s as a very exciting time. The digital revolution had just begun, and software was mainly produced by individuals and small teams, usually working in dimly lit attics, while the majority of people still called you a “computer nerd”, not yet realizing that one day they would need you to fix their computer problems.

When the 16-bit revolution had begun in the second half of the 1980s, I became one of the first (and youngest) game developers in the Netherlands, years before the public internet.

Our main system of choice for game development was the Commodore Amiga, but later MS-DOS, Windows and other operating systems followed. Our productions were published worldwide on 3.5 inch diskettes, and later on CD-ROM.

Here’s a YouTube playlist with a range of videos of our games and Demo Scene productions.

One of our Amiga games was a platform game called Hoi:

Hoi was reviewed in several game magazines around the world. The renowned British magazine The One gave it an overall score of 90% Our games are available for free:

If you’re in for a trip down digital memory lane: I’ve built a large collection of retro computing nostalgia images in the shape of a multi-section Pinterest pinboard.

I’m looking forward to reading about your memories.
What computers did you use?
What was your favorite software / which were your favorite games?

I mostly avoided the personal computer era because my computer coming-of-age was in the early 70s, when there were “big” computers available at school. We were lucky to have access to an IBM 1130 that had up to 32k 16-bit words, and we took turns running punch-card-coded programs through.

My first graphics program was written on a PDP-11 and did hidden line removal. Also punch cards.

The PDP systems are legendary. I love that early computing era.

Also, a legitimate member of the club that "dropped an entire drawer-full of cards all across the floor, and who then had to spend the next three days “collating” them all back together! … based on the “sequence numbers” that they had provided in the last six columns.

Sure, sure … “it was a privilege, maybe, to ‘have been there.’” But I have utterly no desire to go back there! I am extremely pleased with “the many very-recent advances in the semiconductor industry!”

Commodore 128 user here. Most exciting thing I remember is when I got a copy of GEOS for Christmas one year. It was supposed to be the redefinition of operating systems for Commodore, but in reality was simply painful to use in any meaningful way. I like to think it was just ahead of its time. I never a computer from that period because I was too young and my parents dont care about technology. But I had a Sega Saturn and really liked it

I had (and still have, actually) an Atari 800XL during my formative years in the 80’s. I never seriously tried to learn how to use it for anything beyond playing games, though I did make a valiant attempt to copy a BASIC program out of one of those old computer magazines one time.

I can’t recall exactly what magazine it was, I believe it was Antic, and all I remember of the game was that it involved a bat, and a spooky barn. I never managed to get it to run, but I’d love to find that magazine again, and it give another attempt after all these years.

Legit C64 and Amiga 500 user here. I have two working C64s with floppy drives, a monitor and a printer here also.

My first 3d experience was rendering a cube overnight in Sculpt3d on my A500. I also learned programming using Turbo Pascal on Intel 808x and Amos on my A500.

Thanks for the thread.
Learned Basic, and made my very first “paint” program with fill, outline color switch in Atari 130XE. 2kb ram!
I remember typing for hours , pure machine code. 0-1’s for a whole afternoon to see something in my blue screen. Ex user of Dragon Synclair and a little bit of Atari 800XL. I didn’t make it through the whole “music transition” of the synths in the 90’s. Then I came to apple IIE, and finally to Apple II where I started with Aldus Superpaint. The rest is history.

Commodore 128 user here. Most exciting thing I remember is when I got a copy of GEOS for Christmas one year. It was supposed to be the redefinition of operating systems for Commodore, but in reality was simply painful to use in any meaningful way. I like to think it was just ahead of its time.

Cool. I also had a C128. I mostly used it to play games in C64 mode, but I also liked to fiddle in the C128’s relatively powerful BASIC V7.0. I remember creating a simple racing game, using the built-in sprite editor in the C128’s BASIC.

GEOS certainly was ahead of its time. I don’t remember actively using it, but I loved the Amiga’s Workbench when I got an Amiga 1000 in 1986. The Amiga was so far ahead of its time, it was a wonderful experience.

One of the first games I played was the nearly arcade-perfect conversion of Marble Madness. It was like having an arcade game cabinet at home. Amazing.

Legit C64 and Amiga 500 user here. I have two working C64s with floppy drives, a monitor and a printer here also.

My first 3d experience was rendering a cube overnight in Sculpt3d on my A500.

Ah, Sculpt 3D, sweet memories! 3D was magic after seeing the Juggler demo, also made by Eric Graham, the developer of Sculpt 3D.

I also learned programming using Turbo Pascal on Intel 808x and Amos on my A500.

I met Francois Lionet, the developer of AMOS, during a game developer weekend in Belgium in the early 1990s. He was a really sympathetic and enthusiastic man. As our team’s games were coded in hardcore Amiga Assembly language, we used to look down a bit upon AMOS game developers, but after meeting Francois that completely changed. We realized what a lively, inspired community it was.

We had 5 Commodore Pets in high school, four 4016s and one lonely 2001 (everyone hated the keyboard but liked the built in cassette tape drive). That is where I started to learn to program and, of course, we all wanted to make copies of the popular arcade games.

The problem was that the BASIC getkey command was glacial slow and our teacher wouldn’t let us see the Pet manual. He said that it was his only copy, but I think he was worried that we would move past what he knew of the systems. We kept bugging him and eventually he relented, then we immediately devoured the manual. There we discovered the magick of peek(155) and all of our getkey problems disappeared.

I have a small collection of the vintage home computers of the time (1979 - 1985) that I keep alive and take for a spin every now and then.

I also had a Power Cartridge and a Final Cartridge, printing black and white ‘hardcopies’ of game title screens on my Star SG-10C dot matrix printer, and gluing those prints on the wallpaper in my adolescent room.

Hi, I start with Sinclair ZX 81, iirc it had 1K memory but there was an extension to 16K, whow. Mister Sinclair also produce a strange electric car but it was to early to sell something like that these days.

I start with Sinclair ZX 81, iirc it had 1K memory but there was an extension to 16K, whow.

Those were the days of digital minimalism.

The Sinclair range always was the main 8-bit ‘competitor’ of the C64. The ‘Speccy’ had very distinctive graphics: relatively high-res for the time, but the colors were limited to certain areas.

I once made this poster design for a documentary about the 8-bit era: Mister Sinclair also produce a strange electric car but it was to early to sell something like that these days.

That was a really visionary vehicle indeed. It was also featured as a sprite in one of my all-time favorite games: Monty on the Run: Monty on the Run had one of the very best C64 SID chiptunes ever, in my humble opinion, created by SID maestro Rob Hubbard. 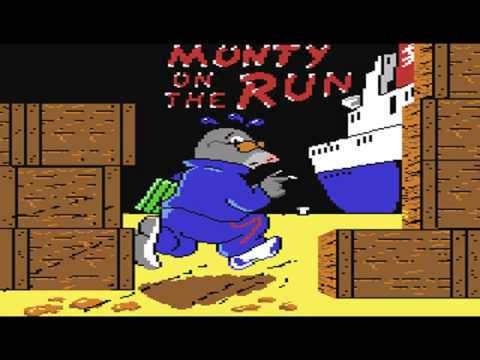 I started in 3d on a cover disk version of Imagine 3d but after saving all my overtime up I bought Lightwave. I was one of the first in the UK to own a legit Lightwave, I still have the dongle in the back of a drawer in my studio.

My early inspiration were the works of Tobias Richter which in the pre-internet era circulated on floppy discs at college along with copious Amiga demoscene discs. Those were the days, rushing home from college with a new demo on a floppy disk.

I had a Spectrum 128. I taught myself BASIC, initially (when I was a tiny kid), and subsequently machine code (when I was slightly less tiny - only slightly!) on it. We had a “programming/game swapping club” in my school, where we would exchange (ie. PIRATE) all the games that each of us had bought (there WERE no legit software shops back in India in those days!). And some of us, via that route, got into game cracking (me!), and hardcore coding and suchlike.

Any Sinclair/Spectrum nerds here, have you checked out THIS?

Btw, everyone, CHECK THIS OUT!!

The most eclectic and the world's only NTSC & PAL C64 diskmag.

interesting topic!when i was a young lad in the 70’s,my mother worked at household finance,and brought home punch cards from something like a uni vac.took up a whole room.we did not get an atari 2600 till the late 70’s.my sister got a tandy computer for christmas in early 80,s.5 inch floppy,no hard drive.dos only.
i remember learning dos when she was not home and writing small programs to loop whatever she was doing back to silly annoying messages.great fun!

I also had lots of youthful fun changing things like text inside executables, making sure the file checksum remained intact, or it wouldn’t work anymore.

I also had hours of fun with the SAM / Reciter speech synthesizer on the C64. I recently discovered that it has been recreated online: