This video was generated using Blender 2.6.5. The entire piece is made up of multiple particle systems deploying open source models. I used Dynamic Paint to drive the pulsing of the buildings and I used a goal seeking boid system to drive the birds. The helicopter was hand animated. To generate the pulsing buildings effect I set up a Dynamic Paint brush/canvas relationship. The brush, in this case is another larger invisible sphere located around the canvas sphere which contains the buildings. This outer sphere generates particles that strike the canvas surface. These contacts generate a pulse of heat that gets mapped into a vertex group which the canvas uses to deploy the buildings over time. The fade out time on the weight paint is what causes the buildings to start to shrink down only to be re-triggered again when another brush based particle strikes the canvas surface again. The birds are controlled by a fuzzy logic system made up of three rules. AVOID COLLISION, FLOCK and FOLLOW LEADER. I animated an Empty around the scene which acted as the goal/target for the FOLLOW LEADER rule. The buildings each have a physics attribute which gets used by the AVOID COLLISIONS rule when evaluating the boids system. This causes the birds to “pop-up” a bit to try to avoid colliding with the buildings.

The soundtrack was created using Korg’s iKaossilator app. The title of this sound pattern was The Chicago Scene, hence the name of the entire piece. 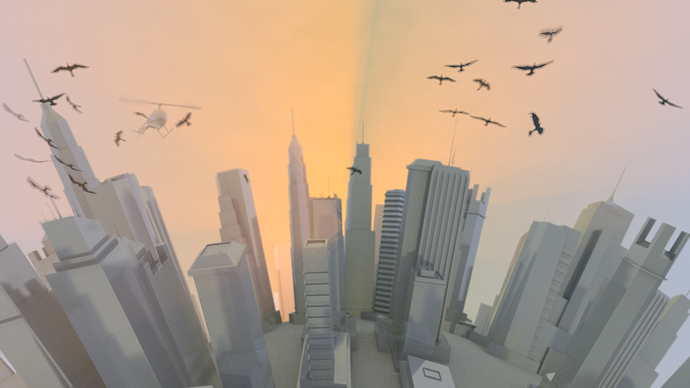 I like it, it works very well, though I don’t understand the explanation at all

Nice. As a Chicagoan, it is thrilling to see that. The detail on the buildings is great too. The main ones are very recognizable.