The Chronicles of a Newbie 3D Artist

Good Afternoon fellow Blender Artists,
This is going to be a chronicle, a journey and a place where I can record my progress from a non artist to a decent artist. I’ve had no serious art experience. The closest I came to producing decent artwork was when we had to do draw a fellow classmate in secondary education art class. I thought I did pretty well and I can usually draw the human figure as long as I have a reference. However, let’s say that I’m a total newbie when it comes to this.

To change that, I went to the library and got out books on how to draw so I’m going through those slowly. In terms of blender knowledge, I only picked up the program about a week ago. My 3D knowledge is also brief and the only time I’ve come close was in my Aerospace Engineering degree course where we had to do design classes (doing ortho views of 3D objects was tedious) and Autocad v13. Many moons ago.

Since then I’ve never really used it, although the lessons did serve their purpose as the theory of 3D space is not lost on me (plus I play a Star Trek Text Mush where you fly around in 3D - now that is a brain twister having to imagine a non graphical ship flying around other objects in 3D space).

Anyway back to 3D art, the main reason why I downloaded Blender was that I had an idea for a novel so I looked at a way to record my ideas as I’m quite a visual person when it comes to information. As I investigated more into what Blender could do, I got inspired by the main creations that I saw around the web. So that’s what I’ve been doing everyday for about 2-3 hours, learning as much as I can. As I’ve played around with Blender, I’ve had other ideas which I’ve been writing down including two animated shorts (One I want to develop for my son so that he can watch them).

I’m enjoying the journey so far, I’ve had frustating times wondering what’s gone wrong, but the difference with this 3D lark

is that I’ve don’t want to put it down, I want to understand why things are not going to plan. I’ve brought a couple of books by Ronald Hess, I’m currently listening to animation theory by the computer animation department at the University of Bradford,UK (which is quite useful to hear the theory of 3D animation - esp when it comes to the relationship on how light works, IK theory, modelling and rendering tips).

I’m at the stage where I can follow a tutorial fairly decently for a begineer, I don’t have to rewind and/or pause so often. The interface and UI doesn’t scare me as much anymore and I don’t panic when I lose a window due to my erratic button pressing.

So far, these are some of my in progress pictures

Following a tutorial by Andrew Price - BlenderGuru (I know I have to work on texture on floor, base of tower and sort out the orientation of the ground to the background). 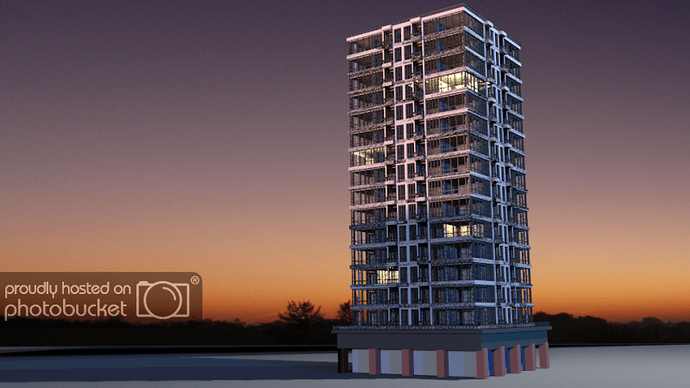 Following a tutorial on how to create a stylised dragon (or at this stage, cow).

Hopefully you will join me on my journey and give me some tips, hints and critique.

There is not much to see now.
If you post wireframerenders of your model, BA can give you feedback if the mesh is clean.

Well, redid the dragon head as satanic bullwinkle wasn’t doing it for me.

Still in progress, need to add more horns on to the head - but almost on Video 2 (I think its’ more to do with the body) - Once I stopped trying to copy the dragonand go with my creative flow, then the dragon started to emerge.

I’ll also post up the mesh version as I’m going to need much pointers as I know that the mouth and eyes (basically the important parts) are messy in terms of clean topology. However, I’m slowly learning.

Yesterday was truely a lesson in going away from the problem and then looking at it afterwards. So when I get home, I think I’ll try that (scaling it width ways) and removing the groove (as it’s giving me problems when I try to close the tail off. I also need to get better and use the proportional falloff tool.

Apart from learning techniques, I just want to use the dragon for another animation project for a forum I’m on. Onwards and upwards :).

I’m always working through the Blender Foundation book and I’m really learning the techniques. Really enjoying myself and the book has a nice flow to it. I’m at the chair stage now and about to tackle the table.

The dragon doesn’t look too shabby. What level subsurf are you using?

I’m no expert on modeling, and i assume opinions will differ, but i’ve been told that modeling without subsurf will ultimately give you a better look when you do subsurf it. I’ve found this to be quite true, and the subsurf modifyer doesn’t pull the shape so far away from the mesh then. However i feel there are two philosophies on using subsurf and ultimately it depends on what you are doing and how much time you have to do it.

Not to sure at the moment, but I think I’m on level 2…I’ll switch it off and see what happens.

So I’ve been busy doing things here and there, I’ve been doing a lot of research into my short animation that I want to do, I’ve also been doing some tutorials (The latest one is the earth on blender guru). I’m getting a lot faster in completing the tutorials as I don’t have to hunt down the keys, menu items so i can do and listen and I understand the terminolgies which helps alot. With the latest earth tutorial, the new learning point was about the compositor and textures, so I’m going to take the theory from the earth tutorial and see if I can apply it to a skull where when it goes into darkness, a robot/cyborg head is revealed. I just need to find the correct spec/bump and normal maps.
Also did the steampunk telescope

So I’m really enjoying my time with the realm of blender and cg art and I’m learning alot. Going to try replicate a building in town, should be interesting. Also thinking of getting a Bamboo.

Does anyone know any good places where I can get a skull and suitable textures for me to experiment with (blendswap) and good texture sites?

Plenty of free texture stuff is available these days.http://mayang.com/textures/ and http://cgtextures.com/ are two quick ones. http://www.everystockphoto.com/ can be handy as well for filtering out different license types of images.

http://www.blendswap.com/?s=skull if you haven’t tried it gives plenty of results to practice with. I would practice uv mapping before the texturing itself as it will make the whole material process easier if you get good at that early on.

http://www.blendercookie.com/2011/01/21/intro_uvmapping/ - if you haven’t found BlenderCookie yet then this is the free plug.

Also I would highly recommend the Bamboo if you can get it. Texturing with a tablet vs a mouse is more or less a no brainer once you’ve tried it and the Bamboo holds up quite well for the price. (I’m fortunate enough to have an Intuos 3 at work, Bamboo at home.) Mine is a generation old I think but haven’t had any gripes with it at all. Assuming the current ones are good too.

Chronicling your progress is great fun. You get the feedback of the community and get to see how far you have come, both of which help when you feel like you are pushing uphill. Enjoy!