Surely, all Dutchies here will know this thingy, the wuppy

I need some help though:

-In reality, the wuppy is much more “wooly”. So the static particles are too “straight”. Anyone knows how to make them more soft?

Hope you will reply, but take time, tonight we’re going on holiday, will be away for 2 weeks. After this, I expect many helping replies

EDIT: The left eye (camera view) is perfectly white, the right one not. The right one is set smooth. Although it is quite round here, I still prefer the left one, as it doesn’t get strange. (Or are there ways to set smooth without this “light behaviour”? 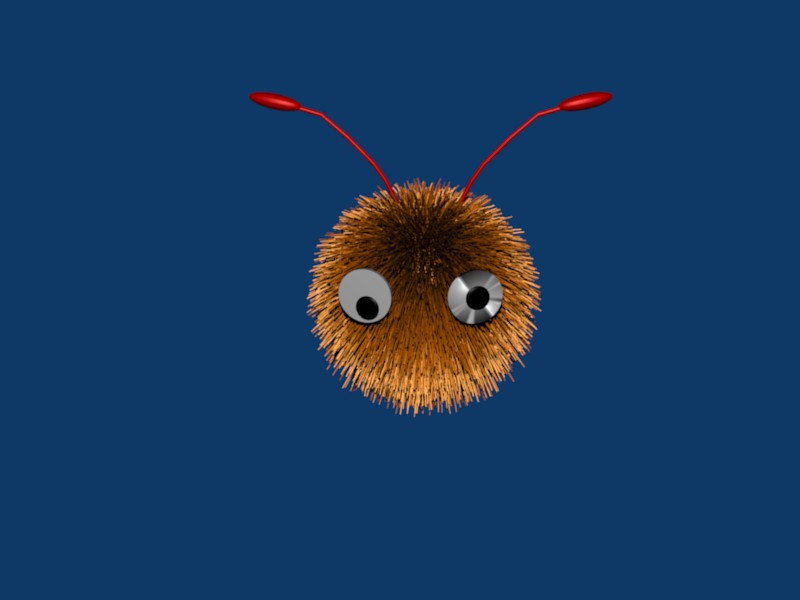 The right eye looks like it has a radial blend texture on it, or the normals are flipped.

As for the static particles, try using tangent shading with curve guides to change the direction more inward. I don’t know if this will work, but you might want to put an empty inside the middle of him, and have it act as a weak vortex pulling the particles slightly inward. If this works, it will be easier than curve guides.

As for the eye problem, I might can anser that. It might be that the lens is casting shadow over the pupil. One way to fix would be to use ztrans on the clear lens instead of raytrans. Another way would be to click the TraShad button for the pupil and the white surface so the shadow will have the same alpha value as the transparent lens.

To make curly hair, in the Particle Motion tab under velocity you can change the Starting Speed from Normal to Texture. Use a greyscale texture (Cloud will do) and to the right of the Texture field change the TEX chanel to the one your greyscale is in. At the bottom right change Int to Grad and set Nabla to the degree you want the texture to affect the curliness.