The fastest way to create an extending edge?

What is the fastest way of creating an edge that will extend another edge (that does not follow any specific axis)? So it’s parallel and starts at vertex where the other edge ends.
Of course, I can duplicate the edge and place it at the end of the first edge, but that requires adjusting snapping settings, and it’s just too tedious. Same with duplicate and rotate - need to setup 3d cursor as rotation pivot. Too slow.

I could slide the edge with ALT for extending, but then I’ll lose one vertex and have one long edge instead of two short ones. I want to keep the position of vertex between the two edges. It must be precision modelling.

There’s also Construction Lines addon, but still, it’s not too fast. It creates new edges as new objects, and then I have to join them, and… eh…

It’s all sooo tedious compared to SketchUp where I just start drawing a line, and it’ll highlight possible edge extensions.

EDIT: We already have two solutions. Zender has suggested an addon (precise method, lets you set extension length), and I have also came up with a native method. Read all the topic if you want to know both.

It doesn’t work the way you described it. Setting cursor to edge with machin3tools “cursor and roigin pie” doesn’t do anything beyond the native blender behaviour. It just places the cursor in the middle of the edge. Doesn’t change transform pivot. And it doesn’t rotate the gizmo.

I came up with my own solution, though it’s still to slow:

That’s strange, it should do exactly that: 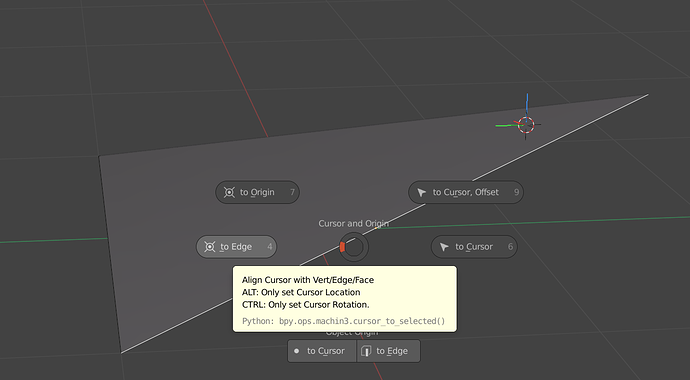 And in the preferences for machin3tools, there’s an option for changing the transform orientation:

Ahhh, I didn’t realize such a setting was there. Must give it another try.

Edit mesh tool has a feature that can extend any selected edge. It’s an add-on that comes with blender: 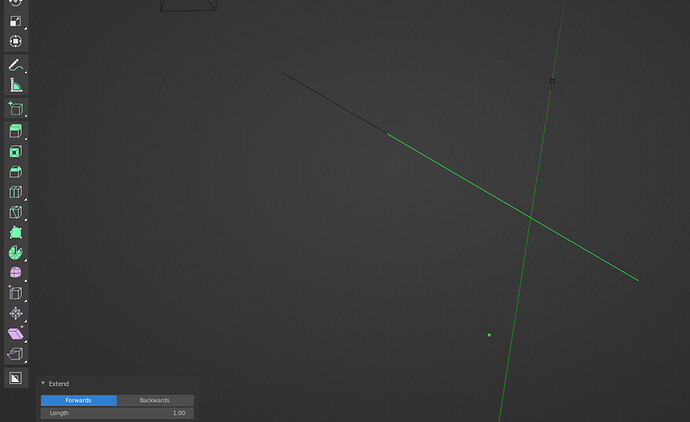 I enabled the edit mesh addon but cannot find the extend feature. How do you call it?

It should appear under ‘edge tools’ in the rmb menu while in edit mode.

Got it!
Thank you a thousand, I’ve been dying to find such a feature!

Hello, folks, I just came up with a simple, native method!

You need to select one of the edge’s vertices and extrude it “inwards” with edge snapping turned on, so that you create another edge, lying on the original edge. Then slide the new vertex in the opposite direction, with ALT pressed, so it can be slid beyond the existing edge.

The only downside of this method is that it doesn’t let you set length of the extension. But unless you need it precise, it’s probably the fastest and easiest, addon-free way.

What do you think of this method? I think it’s a pretty cool trick!

By the way, it looks like I can only mark a single post as a solution. Pity, because we already have two solutions - mine, and Zender’s.