The Great Ravine I: GREYSTONE

This is my Open world RPG Game! Enjoy!
I have been working on this game for over 4 years and its still being expanded. It is early development as of now, but will soon be in alpha and more playable. Its an RPG game that has its own feel. The game is called The Great Ravine I: Greystone.

Plot:
The game revolves around that you wake up in this lake just outside the mighty city, Greystone. Greystone is unknowingly built atop a great ravine, that is now full with dungeons where evil lurks. after your reputation grows from a few tutorial quests, you begin clearing dungeons for the King. During a raid of the largest dungeon yet, you find out you have rare telekinetic powers known as the “Ashen touch”. you meet with a guild of twelve others with the same powers. They train you and you end up being the most powerful over all of them, just as the prophecy states. You continue clearing dungeons and you find a pattern, that all the people in them are searching for something, and you must find out what.

The game currently has a full melee and archery combat system, a working inventory and crafting, an stealth system, Reasonable AI, a quite large open world (about 900 acres), Dungeons, quests, and a Two Steps From hell soundtrack.

I am currently working on: The storyline, and I’m in the process of fine tuning the combat mechanics.

I am planning to add more quests, dungeons, weapons, items and locations, magic systems, crafting minigames that effect what you craft, and more.

See me later posts on what’s been happening

The open world at night: 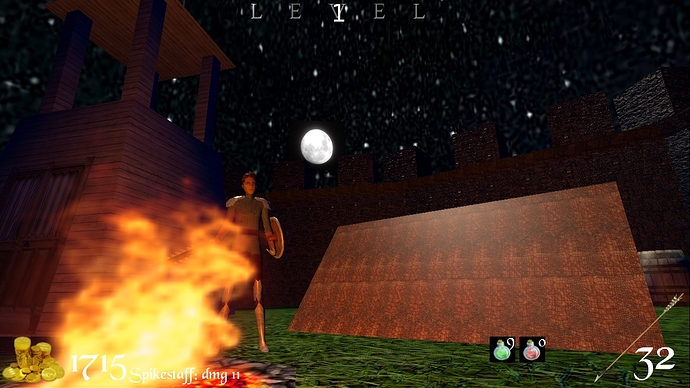 In the dungeons, were you encounter your first boss: 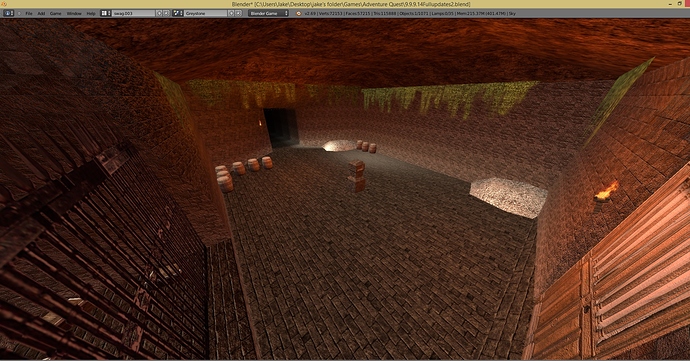 The lake where you awake with no memory the the start of the game: 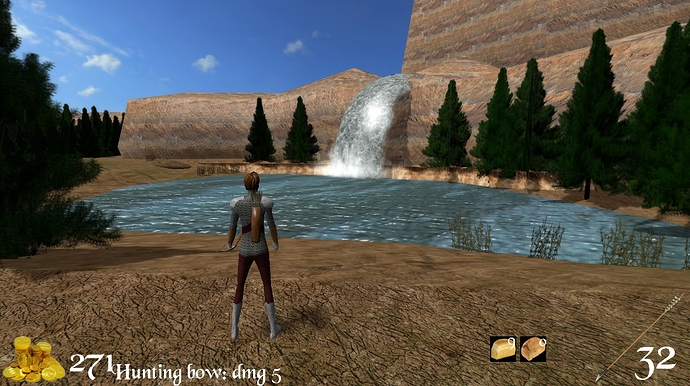 Outdated Gameplay trailer: shows the open world, then the dungeons…

Tell me what you think! I love the feedback
I post sometimes. check out my recent posts for updates

At first glance, your presentation and attitude pushed me away a little, but then I read about the content you had in the game. Then I watched the video. I must say, I am /very/ impressed. There are clearly a few things to change, arrow combat seems a little slow and clunky for example, and a sidestepping animation for strafing left and right would probably be a good idea. But otherwise, oh my goodness, it’s really cool.

Was similarly put off by your presentation, but the gameplay does look very good.

It shows that you’ve put a lot of thought into the content, congrats

I think I’d put the gameplay video on your first post, you can embed video directly here.

Anyway, after watching the video I can say I’m impressed. You could do with upgrading the character animations and environmental textures a little, but the gameplay seems solid. It seems like you’ve done a lot of work on the project. If my own project looked so good after just a year I’d be very happy.

Thanks for the feedback! I will update the post’s presentation, and I’m 16 right now so I’ve got to work on the attitude a bit

Things like the animations textures and sounds are still being worked on, I am hoping to got a more professional standard to everything all round. Here are some pictures of the open World: 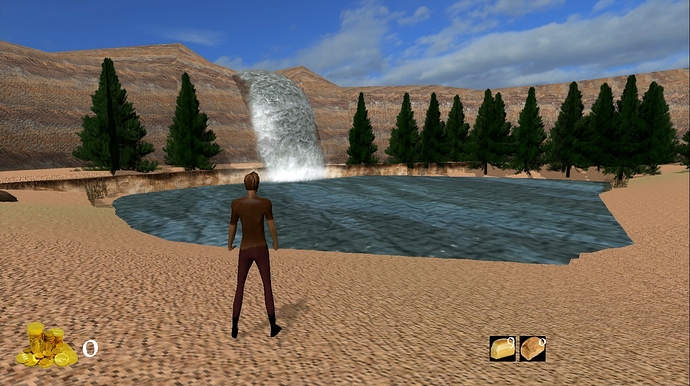 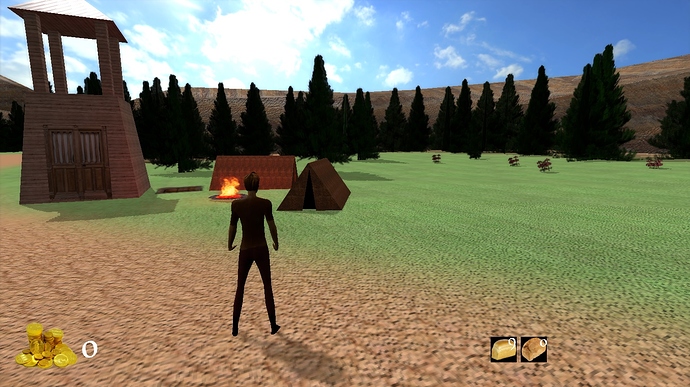 I am agree with MichelleSea about the range combat, and Smoking_mirror was right… video would be more visited if you embed it in the first post.

I have added the first tier armour, the Iron armour.
the are 3 parts to the armour, the body the helmet and extras (like boots and gloves) 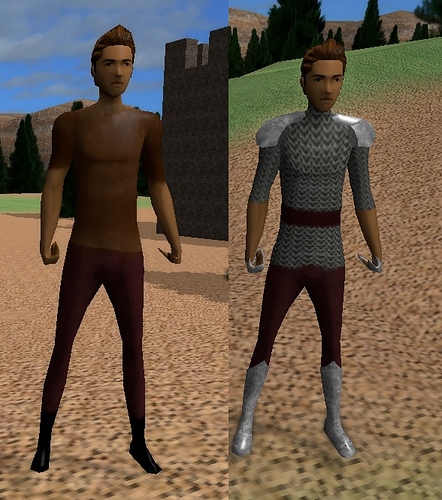 your iron armor has a nice classic Runescape look if you can apply that style to the rest of your textures it will look great.

This entire game really rinds me of runescape, looks really good so far, quite impressed keep it up!

). everything is a work in progress, so I might change things if I see it for the better. I have also made the Enemy AI predict attacks and react, such as you fire and arrow from your bow, and they will roll out of the way, or if you charge at them with a sword they will jump backwards and then run and attack. this really makes the bandits feel more alive than the video I originally posted, however not all the bandits are the same with this, some will be flippn’ everywhere while others will play more like before. adds more unique combat.

Have you thought about using larger textures for the ground?

This Guy does really nice seamless tileable textures which are free.

The only thing I could say about your dungeon is that there should be point to it. Though, that might be something you’re still working on.

Having an evil boss at the end of the dungeon always helps, instantly giving it purpose.

Skyrim does it, Zelda (most notably), Castlevania, Megaman, Left 4 Dead (big zombie, or giant horde). It’s not anything new, but it’s effective.

great work and have you 1 scene for the world or more?

The only thing I could say about your dungeon is that there should be point to it. Though, that might be something you’re still working on.

Yeah man right now there pieces of gameplay (there are 7 unique dungeons)and I’m trying to make them challenging and as fun as I can, and I think that giving them a purpose could be reasonably easy, such as you get a orb or key or something at the end, thus giving them purpose. there WILL BE BOSS FIGHTS

because all of the dungeons are different in playstyles, I can put a boss wherever I see fit.
As for an inventory, it has one already and is reasonably sophisticated and works well. I will update with a video soon.
right now there is 2 scenes, and main scene and a hud, i did this so there are no loading screens at all, it just teleports you to the location of another place. you can see in the very outdated video that there in no loading or a break in the sounds, which i think is awesome.
-Guardian(Supakid13)

Hey hey Supakid13! nice video! i like the puzzles in the dungeon! Really its just a aesthetic like animations, models and textures will really shape this project up! looking forward to following this games progress! keep up the good work!!!

[ATTACH=CONFIG]307307[/ATTACH]
[ATTACH=CONFIG]307312[/ATTACH]
Blenders prepare yourself for an awesome update!!! (hallelujah!)
Hey everyone just putting it out there that this project is far from dead I just went without internet for some time and wasn’t able to post anything

But no more!
I have been mainly working these past months on enlarging the game as a whole.
Since i put this up on Blenderartists I have added: 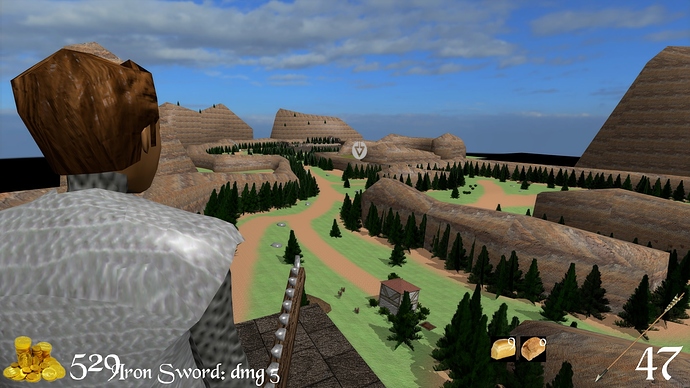 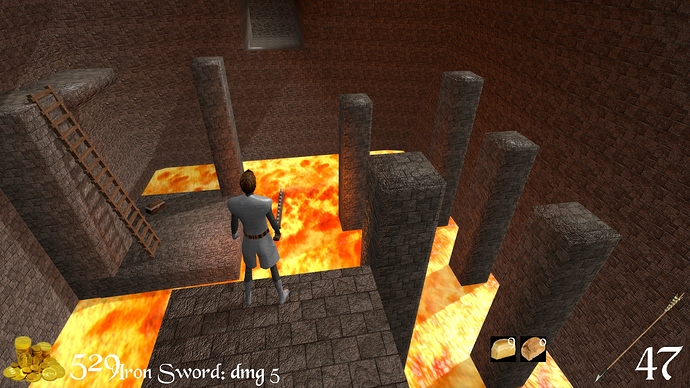 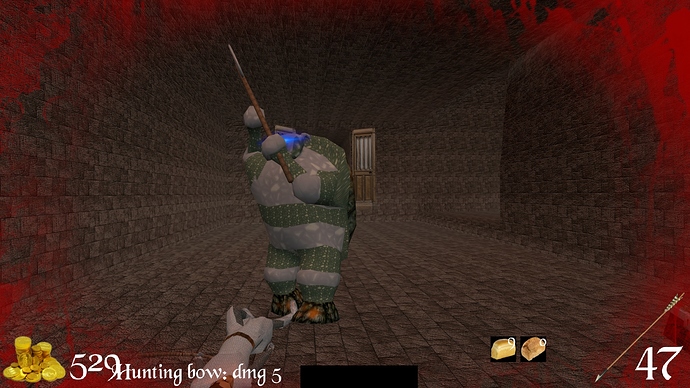 Hello Everyone!!!
I put this project on-line many months ago, and sorry for not updating it

I never stopped working on the game!

The game now has about 2-3 hours gameplay, there is a massive open world and 6 dungeons all
hand crafted by me. The games graphics have had a massive overhaul, as you can see from the
new screenshots it is running 1080p with x4 antialising.

There is a blacksmith that offers this new gear in exchange for gold that you’ve earned
from looting defeated enemys, hidden chests and completing sidequests.

Now there is 7 different weapons to use!
The weapons (With damages per hit)
-Fists - 1 Damage
-Knife - 3 Damage
-Sword - 5 Damage
-Sledgehammer - 7 Damage
-Spikestaff - 11 Damage (My fave

There are now 8 peices of gear to equip!
The items:

You begin with 50 HP, and wearing armour increases your max HP

Because I added character progression, most of the end-game dungeons became too easy.
instead of increasing the stats of the enemys, I made them play better to match you. enemy
archers will now move around and dodge you incoming attacks, bosses well be supported by
lesser enemy, enemy’s will not run off platforms killing themselves. Stealth system is more
advanced, if an enemy hears something they will investigate.

Longer, More exciting dungeons! all have been extended and/or revamped.

Dungeon 1: The first one. platforming, fighting, a bit of puzzle work, dodging huge
swinging axes. if I was going to show someone the game and how it works, this is the one.

Dungeon 2: Platform based. you fall down a hole and are trapped in a room. you flick a
lever and lava begins to come out of a drain in the centre of the room. the room is filling
p with lava quickly, you appear to be doomed. then, stone platforms begin to come out of the
walls and floor in succession. you need to stay on them before you die.

Dungeon 3: MID-GAME BOSS. stealth based. the bandits are digging their way through a dungeon.
you stick to the bushes and make your way the the chamber were they were trying to get to.
inside you find a 2 story tall turtle like Boss. (see screenshot.)

Dungeon 4: A three part dungeon. begin facing a mass of bandits. a large spinning boulder
on a chain is then in you way over some platforms. then you enter a room that is begin to
flood with water, and you must figure out the puzzle before its too late.

Dungeon 5: you enter a massive circular room and the doors shut behind you. then you are
forced to face wave after wave of increasingly difficult enemy’s. good luck.

Dungeon 6: FINAL LEVEL. 3 Times longer than the others. incredibly well made in
comparison to the others. over 10 extra passages to explore for their rewards. the dungeon
has a huge amount of loot and surprises, and new enemy types. this is the games pinnacle.

I am now working on a trailer to show off the game!! it will take a while because I am always adding and changing things.

And that’s all from me for now!! Thanks for reading!!

It’s clear that your not a fantastic modeler, but you are a fantastic game dev, and I mean that in the best possible way.
Your game has alot of content, the dungeon video showed great promise and the fact you have stuck with the project make me belive you will go very far.
I think you should maybe restrict your goals and focus on getting one thing done at a time however, polishing off the existing content before adding anything new. Keep up the great work though!

Hey mate thanks for replying!
I get were you’re coming from and It makes me wish I could motivate myself to really dig deep and improve the quality of the game. Since I am still at school and studying when I have time to work on the game I usually find myself making something new and exciting instead of tuning up my old work.

Oh, and here’s the Blacksmith set I just made! 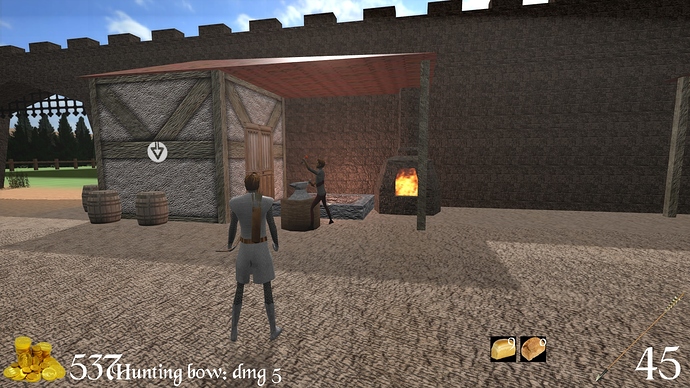 The blacksmith has an animation and says words when you approach him like:
“Only the greatest armour you will find here.”
“I offer good quality for the coin.”
“My weapons will be your enemy’s wrath.”
“Even the heaviest blows will not cause my armour to falter.”
…and I stole from skyrim

It’s clear that your not a fantastic modeler

For the record I think it looks really nice haha

Then again, graphics don’t ever really bother me too much: I’d play this game in any case!