After watching The Incredibles for about the twentieth time in the last two weeks (literally; I can’t get tired of that movie), I suddenly realized how I could recreate the Zero Point Energy effect to some degree. Attached is the result so far. It’s a very lowpoly sphere with one extruded face (I know the ray looks different but this looks cool for now). I applied a subsurf modifier with three render levels and a stucci texture displacement map. The material settings are:
a very pale blue color
“traceable” setting is off
emit value of 1
toon diffuse shader with size at max and reflection at .5
no specular
ray transparency with fresnel at 5 and fresnel blending factor at 1.35
(at this point the scene takes 2 and a half seconds to render)
the index of refraction is 1.15 (not really important since it does not produce the correct result anyway)
a lamp is stuck in the middle of the sphere with a pale blue color
(now the scene takes around 16 seconds to render)

Now I have a question:
In the movie there is a flickering blue noise on the effect that for those of you who haven’t seen the movie looks just like a color map was applied to the shape. However, because of the fresnel effect, any color map will be invisible except for on the edges. Is there any way to make a texture ignore fresnel or something to that effect?

Edit: I just thought of a way I could do it with compositing nodes, but it would be better if it would require no compositing. 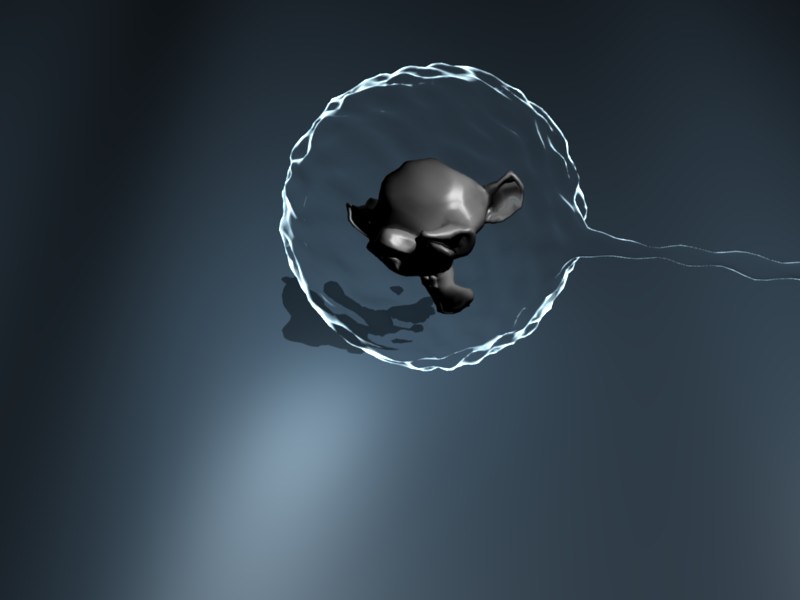 I don’t know to much about your problem but I would like to make a little note if you don’t mind. In the movie, the “field” almost fit the characters contours rather than just contain them in a sphere. What you may want to play around with is duplicate the model, enlarge by maybe 5% - 10%, then apply a texture to that.
Now that I say that, I may know how to get the effect you are looking for. Give me a while to test my theory. That is unless someone else can answer your question faster.

That’s a simple but nice effect. As stated before, you should try having different object creating the effects. For exemple, the sphere you have right now, + a little smaller sphere with the noise effect + another object to created additionnal effects like sparkles/lightning around the sphere

In the movie, the “field” almost fit the characters contours rather than just contain them in a sphere. What you may want to play around with is duplicate the model, enlarge by maybe 5% - 10%, then apply a texture to that.

Actually, I didn’t forget about that. You’ll notice in the movie (as far as I can remember) that the field follows the basic shape of the body being contained, ignoring small details like ears and noses and stuff. If Suzanne there was noticeably the size of a person or so, I would make it follow the shape but for right now we’ll assume that her head is a reasonable size.

If you are using raytracing, then you could set the “Filt” value up. That makes it so that, while it’s still invisable, it’s color get’s projected on the object behind it. Did that make any sense? Just expirement with it.

Where is that setting located?