Well, to be frank, this is a blatant rip off of this, but mad in cycles, and a little different in other ways as well. i also plan to add a boat, but my plans don’t always become reality. Anyway, critiques on textures shaders and lighting would be much appreciated. 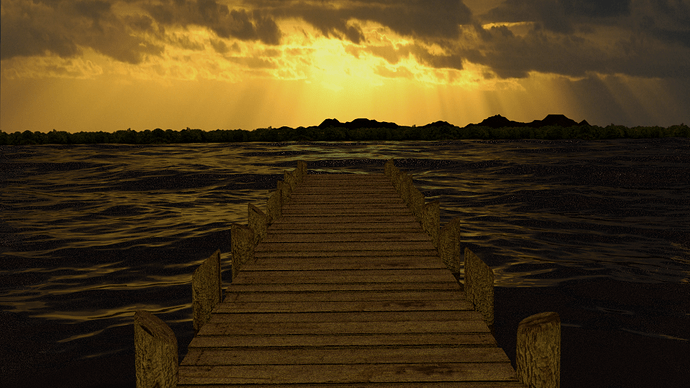 Well,there is ambiance in your image, but first of all, you probably did not choose the easiest background to work with. The lightning is pretty difficult, as it comes almost directly in your face. On your picture, it seems you used a coloured flash to take the photo. And a weak one at that.
I would : a) change the mapping of the background image to put it a bit higher, so you have more “light” and less clouds. Also place the sun either on the left or on the right, so you can work with shadows more easily.
b) increase the overall lightning of your scene by at least 15 - 20 pct. Maybe even more. 'always easier to take some lights off than to add them precisely.
c) as the main point of the image is the jetty, I’d pay more attention to the modelling of the pillars. At least the first two or three, so the eye is not drawn to their uniformity (even though you rotated them)
d) the ocean : well, it looks like waterworld. I would try to model a shore, and perhaps even tackle with particles to make just a bit of foam. I know it’s easier said than done. But there are tuts for that.
and finally, if you ever add a boat (which in my opinion would be a great enhancement to the image), maybe model a lamp or two, you know, the low kind you find on jetties. And have the boats lamps turned on, too. That would partly solve your lightning problem.
'Hoping to have been of help, keep up the good work. As I said, the ambiance is cool, and it can be rendered perfect with … more work, as always…