The Lost Relic - Explore and trap monsters in 3D dungeons

Your people are threatened by the orcs, and the only way to defeat them is by helping your king bring back the ancient artifact hidden deep in the dungeon : The lost Relic. 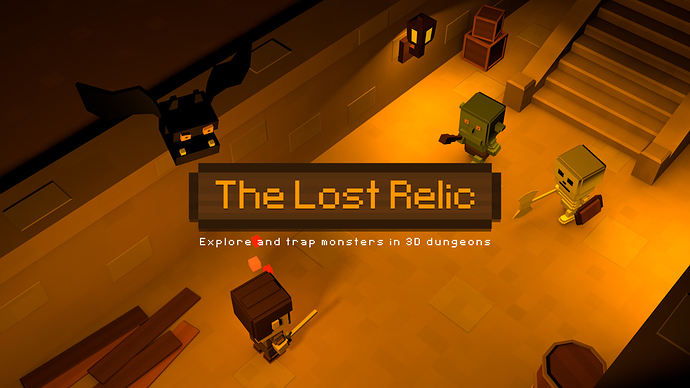 Mixing RPG style and puzzles, this game uses the power of 3D physics engine : having fun exploring and trapping monsters in the dungeons.

Available for free (pay what you want) on itch.io (For Windows & Linux)

hi
man your game is awesome ,and so fantastic , i really enjoyed playing it so much,
it remanded me of many thing, 1 Diablo 2 , the dungeon and all quests you have the do, the monster’s you fight, 2 sword art online anime, it also talk’s about exploring dungeon’s and fighting monster’s
the game is amazingly awesome and beautiful, from the idea to the design style to the game play , i really love it ,
but there are some thing, that i want to talk about it in the game,
i divided them into to type,
1 the things that aren’t good or nice in the game
2 the thing’s that are messing from the game

first thing i note,d is the mouse curser, it,s very slow so you cant click on the monster’s and the ground fast, something to avoid being hit, just like league of legends
the 2nd thing, is that the monster’s are getting week every time you level up your self, thy should become stronger every level, like that big monster, big monster’s have 3 basic thing’s 1 thy are slow 2 thy are tank,s thy can take much hit without having a problem 3 there attack is deadly ,so whine i reached level 5 of my sword,s i never needed to buy potions or any thing else from the market ,actually i never went to the market ever till i finished the game ,
the fire torch have some kind of a bug, as it is reach’s to -21 and never dies ever, as the same to my HP bar, i,v got 11 potions and every time the monster’s hit me to 0 HP the health just regenerate without doing anything to the health potions that i am buying ,thy never end , ever
3rd thing is the monsters targeting ,it,s very, not helping, as i note,d that you cant target a monster only if you pointed the mouse on his medal body or his leg’s wich it,s not helping, especially if your trying to hit and run, and change your positions while your fighting , it will be hard to do it by pointing exactly on his body,
so i think you should add a hiding object bigger then them, parent it to each monster, and make it play as the targeting object so it make is it easier to the players,

2 the thing’s that should be in the game
i really think that add a map, to the game, yes i know it will make it easer than before but, as i was playing the game i become confused in where should i go and here did i went, so i think you should add a map to game ,but it is hidden till you explore the dungeon, just like Diablo 2 if you didn’t explore the dungeon the map never show, or you get to buy the map from the market or find it
the market should become more big, like add a wise guy to help you and give you some wisdom and info,s about hard monster’s and level’s ,you should add a weapons store other than the blacksmith, who upgrade your weapons
you should add some kind of weapons in the game more than just the bow and the sword, so you can give player’s more options to play the game, just playing with 2 kinda makes it get boring especially when you reach level 5 or 6, as i think you should add more thing, other than potions and torches like armors trap’s bomb’s ect ,also each sword or bow have a limit to make the game more fun and hard
the level’s are nice but also as you go through level’s you get to feel like if it is the same, you need to add more tasks other than just finding the key and the door, to the next dungeon, add puzzles other mission trap’s , like helping humans to get out protecting them , thing’s that will motivate the player to play the game

this are the thing, that i think you should do or at least think of them if your thinking of making another version of this game, , you don’t have to take my word,s it,s up to you whether you want to do it or not, i don’t mean to become picky, it,s just what i sow,
don’t be mad, and good luck, as i think you,l have a brighter future

Cool, did you finish it already? I’ll give it a try when I’m not busy with the BGMC.

@alf0 : thank you very much for your interest and ideas. I’m glad you enjoy the game, it’s very motivating

@Smoking_mirror : good luck for the BGMC. I’ll wait your feedback too

The lost Relic was a very good practice for me, I’m actually working on my next project but maybe there will be a Lost Relic 2, one day

i really like RPG adventure game,s ,so much i played Diablo and it really stuck on my mind

I sat down and played this through. And I must say this one of the first blender games that has kept me immeresed enough to play beginning to end. I think its its great. The graphics are simple yet good. The gameplay is great. Everything about it was good. I hope you make a Lost Relic 2 becuase this definately left me wanting more. Excellent job. My only critiques would be.

Thats all i got.

As I said before, the game was excellent and just wish there was more.(Levels, monsters, inventory and equipment items).
I would have to disagree with alf0, as I like that there was no map. Leaves more to the exploration part of the game.

yeah your right ,the map will just make it ease and take away the meaning of exploring ,but i suggested it only because it become,s hard to know your destination while you rotate the view , i personally lost a couple of time,s there XD

@alf0 : I also have a very poor sense of direction

Thanks! It’s amazing! You must really be a pro with blender. I think it must be one of the best blender games I’ve seen so far… keep going!