The area and architecture is a reconstruction of the lost village of Kurovo (Moscow region, Russia) (56.044693, 37.773067). Reconstruction is based on 1900-1920 photographs. There is a sad history behind this project which I encourage you to read below.
This is my first project in digital art. I started it 3 years ago knowing nothing about 3D graphics.

Huge thanks to Peter Sekula for his invaluable master classes and advice. Also very grateful to Per Gantelius for his help with camera matching the old photographs using fSpy and Rob Tuyel for his inspiring Blender course.

You can find some extra pics on my Artstation page https://www.artstation.com/seethesky

++++++++++++++
Background story
The first written record of this village dates back to 1506. In late 19 century the village was big and rich: 250 villagers, two stone churches with a belfry (all built in the course of 16-18 centuries), wool factory, monument of Alexander II. None of that exists any longer, only some parts of the area and scattered tomb stones remain.
In early 1930s it became apparent that Moscow requires more potable and technical water due to the population growth. Among other man-made reservoirs and channels around Moscow, Joseph Stalin order to create a highly restricted reservoir close to Moscow in order to store potable water. That reservoir was built in 1936 by damming small river Ucha and flooding 19.3 square kilometres of land. Kurovo and a few smaller villages were flooded completely. Before flooding all churches were demolished. Stone, bricks and debris were later used to stabilize the banks. People were relocated to other villages leaving behind and under the water centuries of their history, including graves of their ancestors. Russian writer Mikhail Prishvin was spending summer nearby the area 8 years after the flooding. He went for a walk and had a chat with a local man. The man told him that coffins from the flooded cemeteries were still floating on the surface now and then. Following on this conversation, on 19 July 1944 Mikhail wrote in his personal journal: “This artificial lake is the lake of human tears from which all Moscow residents drink. This conquered nature will never be at peace with itself. Even if you are having a quiet evening like today, you still cannot ever trust that silence.”
This project is in the memory of people, the area and events outlined above. 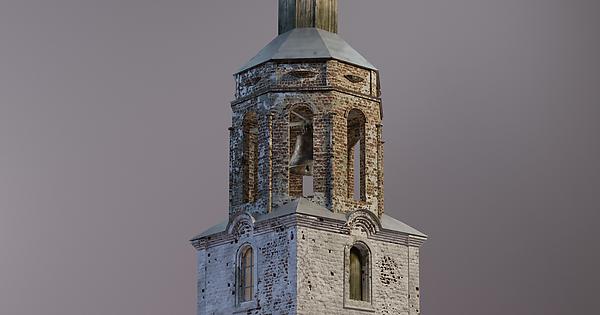 Znamenskaya Church (Church of Our Lady of the Sign) 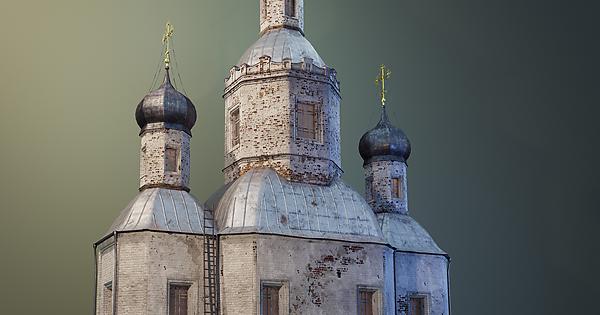 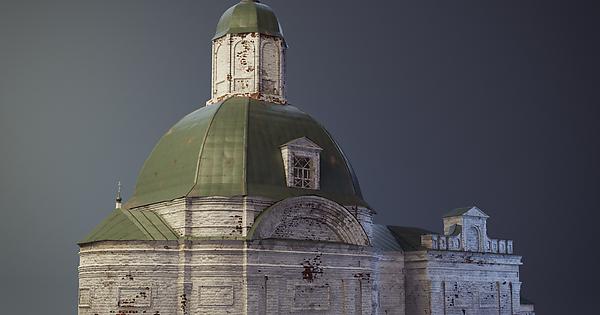 Wow. Amazing job! I always love it when people recreate irl places and things, and more so when they go into the history of them just to make it more accurate

Very nice! I love the atmosphere. It feels somewhat like a painting and has lots of gravitas.

That is quite beautiful - very well done! Would love to see a simple animation of that - birds flapping, mist rising or trees leaves gently rusting.

Sergey Mikhaylovich Prokudin-Gorsky (Russian: Сергей Михайлович Прокудин-Горский, listen (help·info); August 30 [O.S. August 18] 1863 – September 27, 1944) was a Russian chemist and photographer. He is best known for his pioneering work in colour photography and his effort to document early 20th-century Russia. Using a railroad-car darkroom provided by Tsar Nicholas II, Prokudin-Gorsky traveled the Russian Empire from around 1909 to 1915 using his three-image colour photography to record its man...

Scroll down toward the bottom of the page for a gallery of the color photographs he was taking around the Russian countryside in the early 1900s.

Thank you for your feedback! I thought about re-working the scene in UE4 in order to turn into an animated video. But after 3 years of working on the same project, it feels like it is time to move on to something new. Very impressed by your reference to Prokudin-Gorsky. It is so cool that you know of him. His work was one of my earliest and biggest inspirations. This is how I got interested in lost Russia in the first place. If you are interested, I can recommend an awesome film about him and the places he photographed. https://vimeo.com/98734962 They call it “Russia in Bloom” on Vimeo. I guess that is for simplicity. More accurate translation would be “The color of the nation”

Oh wow - how cool is that! His influence really shone through in your image. That’s incredible. I’m a photographer as well and really enjoy large format photography, and historical photo chemical processes. I ran across his work about 10ish or so years back and really loved the look, color palettes and atmosphere of his images. They’re both photographic and painterly - and they depict a history I’ve never been able to see anywhere else.

Thank you for the link to the film - I will definitely check it out!

Looking forward to your next project, hoping it doesn’t take another three years.

Three years? We’re talking about some serious dedication here. Congratulations for this huge effort. This is absolutely perfect for a first attempt. I’m looking forward to seeing your next project. You have a bright future ahead.

Thanks for this, birdnamnam! I completely agree, 3 years is a very long time. For good reasons though. I had to learn from scratch, collect references (involved requesting access to archives and allocating time to visit during business hours), deal with primary job (often kept me away from the project for extended periods). I also kinda skipped the beginner’s part with bottles and other simpler objects. Add to that learning Substance and SpeedTree and there we have it. Hope the next project will not take that long ) Cheers

really beautifull work !
The building is amazing, and accurate and the misty ambience is just perfect

Masterpiece! Thank you for sharing this very atmospheric and emotional work and the story behind it. I love all of it, the the trees, the light, the mist, not to mention the church itself. Together with the story it invokes such a bittersweet feeling that will stay with me for a while. Thank you!