UPDATE: Please scroll down this page to see a second and third version of The New Narcissus.

This project was conducted quite differently, in that I first created this scene and rendered it as just a plain AO render in Blender. Then I textured and colored the render using a variety of brushes in Photoshop Elements.

I forgot to mention this is all one mesh. I’m posting a subsurfaced wireframe below in case anyone’s interested. 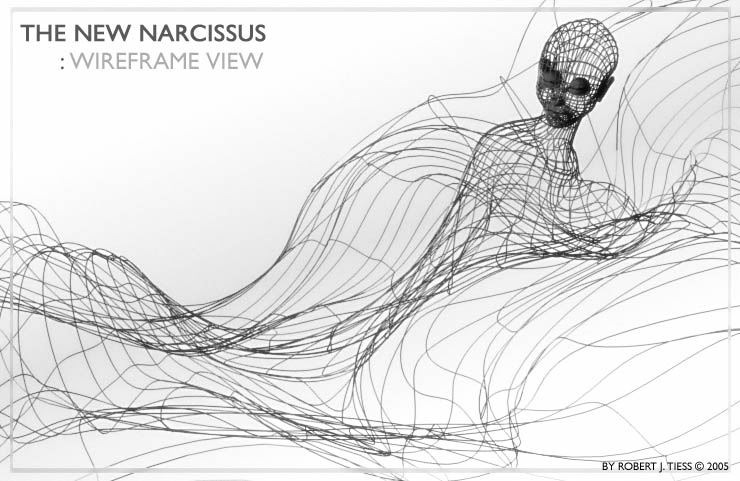 Very different from you Robertt, which is a good thing.

Personally, some more colour variation and proper highlights would make this one affect me more. The colours seems to be just plopped on and in no particular order. The highlight on the face/head works, but based on that, there should be more of the same lighting highlight throughout the model on the higher spots of the mesh.

Some deeper, painted in shadows would also benefit here as well, not just the AO shadows.

i strongly agree with BgDM here,
some color varation and some more shadows can help here.

BgDM: Thanks so much! I really want each project to be unique and have its own style. I do have an alternate render concept for this project. Your observations as always will come in very handy if I reapproach this one. It needs to be dark due to the self-absorption aspect of the subject, almost like a personal black hole, so highlights can be tricky to accentuate in that regard, but it’s an important enough image for me (as what I consider a “serious” piece) to revisit it and where more progress can be made.

–=leon=–: Thanks! Color may play a different role in the alternate render. If it looks good I’ll post those results too.

its amazing you went the easy way this time i have always been fond of your works espetialy when you use creative ways to add meaning or effects like singing in the rain. However i still like this one very much it reminds me of a sculpture in broken hill, Australia.

Thanks Aidan! I wound up making a lot more work for myself in the end the way I approached this particular piece.

Oddly enough, this one took a lot longer to finish than “Flight of the Phoenix,” and it seemed more difficult to complete the more I worked with it, which made it an ironic but educational experience in retrospect

The process I followed here actually follows, up to a point, what’s commonly done in 3D: create a mesh, set up UVs, export them, paint textures, load texture(s) back in Blender and assign to model.

By painting the scene from a fixed perspective I eliminated the UV steps and didn’t have to return to Blender. I could have gone back though, created UVs “from window,” and then apply the entire texture to the scene.

Never as easy as it looks or sounds though

A good part of my ongoing 3d studies are textures, so I’ll continue trying all sorts of things in and beyond Blender to see where and how far it all can go.

I think this would look really nice as a sort of relief sculpture? …know what I mean?
Seems very decorative

Oh and jsut out of curiosity- what is a Narcissus?

good work there mate keep it up.

Thanks guys for the feedback

Here’s some information about the classical Narcissus and some from another site.

Great updates Robertt. See how the highlights bring it out more?

I actually really like the 3rd incarnation of this. Really a nice sketchbook type render and paint over. Looks more raw.

Simply beautiful. It’s not just 3D art, it’s art. People would pay to hang that on their wall.

great work i like number 3, reminds me of basse’s style