Here’s a new project I’ve been working on for the past two days : meet the Pedalternorotandomovens ! It appears on two of MC Escher’s drawings. I liked the little fella and thought I could make a revised version in Blender, maybe even animate it (although I haven’t done any rigging or animating yet…).

Comments and constructive crits are welcome. I need a little advice on the texture… I don’t really know which color I should give him. I was thinking maybe green… suggestions regarding the modelling or the rigging are also quite welcome ! I’m quite new to Blender and have only been using it for 2 months, so bear with me

On the pic you can also see Escher’s original version. I made less human leg, added little spikes and two holes for the nose. 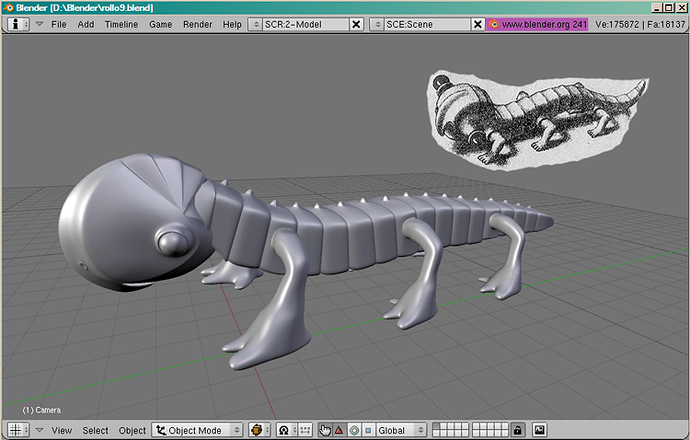 That would be awesome if you animated it. Escher is one of my favorite artists, and I remember that drawing well. It rolls up into a ball, and then back to the form that you have it in now. I like it so-far.

That’s a short name! Just watch the boxiness its not quite that boxy in the image. Can’t wait to see how you attempt to do the blending into a 2d image. That stuff is mind boggling!

The tail is a bit short…

well done… really smooth… can we see the wires?

sorry for the late update… I’ve been very busy lately.

Unfortunately, there’s not that much to see I have to admit. I did a little tweaking on the legs and the tail and made his body look a bit more curly. Now the next step is rigging… I’ve been trying to figure out how exactly I should do this, but have failed miserably as of now !

Could someone please help me figure out how the hell I should rig this guy ! I have read a couple of tutorials on rigging (hand rigging, spider rigging…), to try and understand how the parenting and the constraints affect the skeleton but it never does what I expect it to !

I would like him to be able to roll up in a ball, the way Escher made him… as well as other basic poses of course. take a look at what I’ve done so far and tell me if maybe I should use less bones. I don’t know. 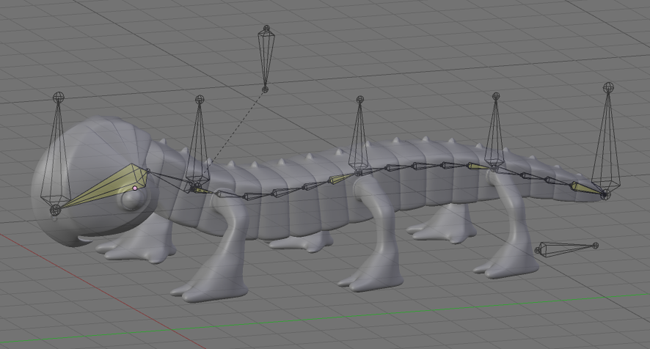 Alright ! Here’s one more update ! I finally had some time to finish up the armature and put him in the pose I wanted. Also did some more tweaking here and there, finally found the camera angle I wanted to use… and finished the lighting (jeez that’s long !!) ! Render was made with Yafray and the DoF was done in post prod, I just wanted to see what it would look like in the end.

I know the texture is no good, but I’d like some advice on that… so C&C’s most welcome ! I don’t really know what kind of color/texture I want.

I also put the wires, as someone was curious to see them. 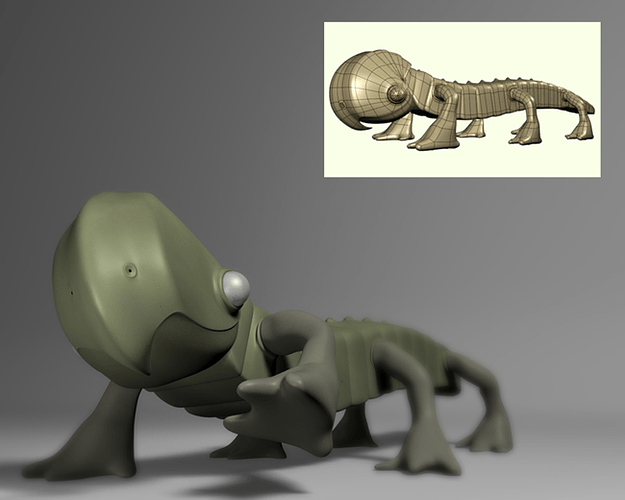 Escher rocks!!! - and so my friend do you

I love those creatures, the original feet (with toes) look better I think.

I recommend not using masked gaussian blur like you most likely did though. It results in something like moisty glass. For GIMP I recommend focal blur or just use the new blender blur in the compositor.

thats a cute little guy…i was wondering from your pics, do you have opengl antialiasing enabled in your video drivers?

As far as the depth of field effect in the latest render–it looks like you did a Gaussian Blur with the mode set to Darken. You really shouldn’t use Darken for this; it’ll retain more detail, yes, but it doesn’t look like the blur in a real photo. As jimmac said, it looks kind of like moist glass. For best results, just use Gaussian Blur as-is.

Just a little thing, though. Keep up the great work!

snelleeddy : I thought the human legs looked a bit odd… my creature is an evolution I guess, I didn’t want to make a carbon copy of Escher’s. And thanks for the compliment

jimmac & Datameister : thanks for the crit, I’ll work on the DoF. It was just a try anyway (took me less than a minute to do…). I had a look at a tutorial on DoF in blender, but I didn’t understand everything, I have to admit. I haven’t done any compositing in blender yet and have no clue what CVS is. I’ll probably give it a try sometime though.

anoncompboy : I have opengl activated yes, why ?

I’d like to focus on the texture for now. Ideas anyone ? Should he have a lizard like texture ? or more like an armadillo ? Should he be yellow / orange ? or green ? I’ve done a couple of tries but nothing seems to work.

I’ve also tried displacement on one texture but it really looks horrible ! The displacement is way too much even when I reduce the value… I must be missing something…

Ah, I just learned about the answer to the displacement problem yesterday!
What you need to do is reduce the Nor slider to 0 in the channel that uses Disp. You have to do that even if you are not using Nor in that channel.
I think he should be green/orange, and textured more like an armadillo.

[Edit: Corrections on the displacment solution]

The cute little critter is also known as “Curl-up” Curl-up or Wentelteefje (original Dutch title) is a lithograph print by M. C. Escher, first printed in November 1951. This is the only work by Escher consisting largely of text. The text, which is written in Dutch, describes an imaginary species called Pedalternorotandomovens centroculatus articulosus, also known as “wentelteefje” or “rolpens”. He says this creature came into existence because of the absence in nature of wheel shaped, living creatures with the ability to roll themselves forward. House of Stairs is a lithograph print by the Dutch artist M. C. Escher first printed in November 1951. This print measures 47 cm × 24 cm (18 5⁄8 in × 9 3⁄8 in). It depicts the interior of a tall structure crisscrossed with stairs and doorways. A total of 46 wentelteefje (imaginary creatures created by Escher) are crawling on the stairs. The wentelteefje has a long, armored body with six legs, humanoid feet, a parrot-like beak and eyes on stalks. Some are seen to roll in through doors, wound in a ...

You could raise the Hard option on the Spec for the upper part. A longer tail would look good.

I wasn’t entirely satisfied with the result so I decided to start all over ! I kept the head though (which I tweaked). This time I want to have a clean mesh and a better rig. Last time I wasn’t able to have him do what I want. So here’s another try !

What is also different this time is that I’m taking a lot more freedom from the original one ! I’d like to make him a stand-up character who could also go back into his original pose and maybe even curl like the real one !

What do you think ? Better or not ? Doable ?

I’m also wondering wether I should give him 4 legs… or stick to 6 like the “real” one. 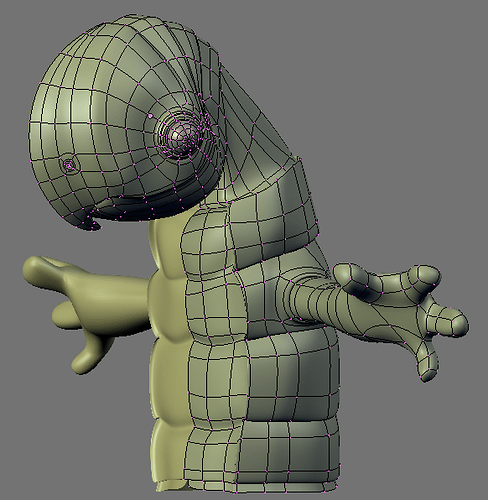 I would say you should do 6 legs that way you could have some fun with it like have four legs walking with the more handish looking ones up front with a cain… or you could have him do something with 4 hands and walk with 2 legs. Or a combination of both? i guess theres alot more to choose from but its your project.