The Remnant game synopsis is up

Those wings are way better now.

so i thought i would show you guys the next model that i will be working on once the fighter is done. 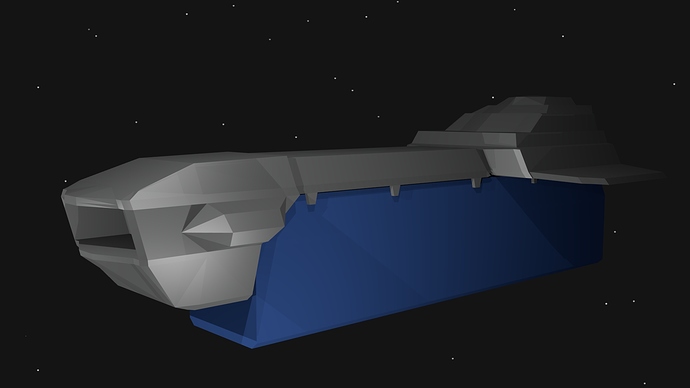 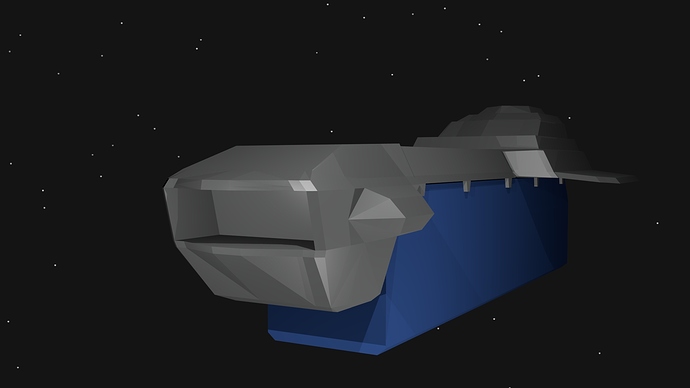 Very nice work with the models so far!
Your latest one reminds me of a whale-shark a bit

Very nice work with the models so far!
Your latest one reminds me of a whale-shark a bit

good deal, and thank you. i cant wait to start work on the freighter but i have decided that my usual jumping from model to model will now wait till i finish one and move on to the next, i have a gaggle of models that I am re-purposing for this game. I owe a lot to the community here for helping me hone my skills with blender, and i hope to pay the community back with a game that will be not only fun but engaging as well.

so i had to re-design the wings a bit to clean up the mesh, after i add the detail to the inside I am going to make the pieces thinner so it does not look like a ballooned up toy.

I was hoping to start the un-wrap process today but that will have to wait until i finish fixing the model. gotta say i am loving the dissolve edges and vertex tools and inset extrude is a wonderful addition to the tool box for blender. 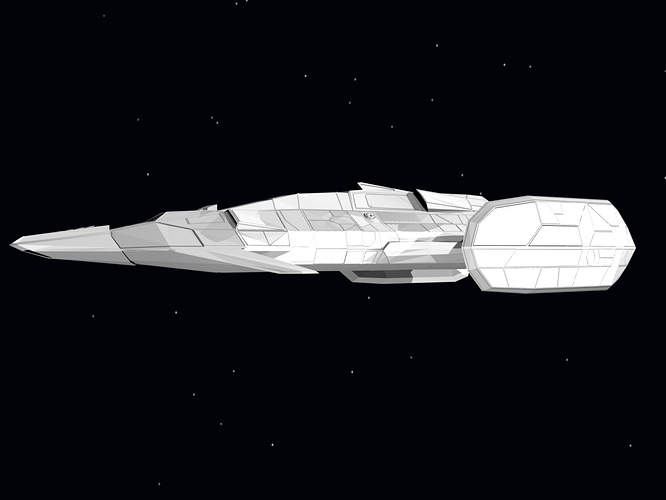 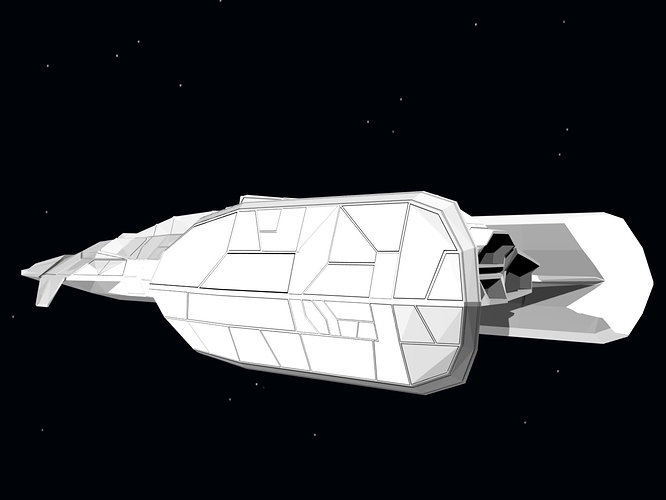 Just a small logical crit. If the fighter is in space, and the engines aren’t mounted on the wings, what are the purpose of the wings?

Just some food for thought…

this one i capable of atmospheric flight as well, but in all reality i think it would probably drop like a brick lol

Just a small logical crit. If the fighter is in space, and the engines aren’t mounted on the wings, what are the purpose of the wings?

Just some food for thought…

well, basically you are right. In space there is no air so basicly the spaceship could be also a cube or sphere, it wont make any diffrence. But to be honest the whole scifi genre is also a bit of fantasy.

For example:
i think the star wars x-fighter has also 2 useless wings.
or maybe you know the imperial shuttle from star wars? it has 3 wings. for landing and taking off it collapse 2 of the wings, but when it is flying in space i uses all 3 wings. it would make more sense to collapse all wings while in space, becasue they are useless.
the normandy from mass effect is a pretty nice spaceship, which also lands on planets, but the wings are not shaped to help with the aerodynamics. i think the wings are also useless in reality, but it would kill the nice design.

I see it that way:
spaceships are an evolution of airplanes, so some still have useless wings.
So in my opinion spaceships can have wings even if they are not supposed to land on planets

well i am attempting to finish the detail on this thing i am working on the bottom of the ship and am stumped as to what i should add, basically its a blank canvas. i have the landing gear indent for skids, but i don’t like the idea of skids, also dont care for wheels landing on the ship so added anti grav arrays to the bottom. any thoughts guys? throw them at me. 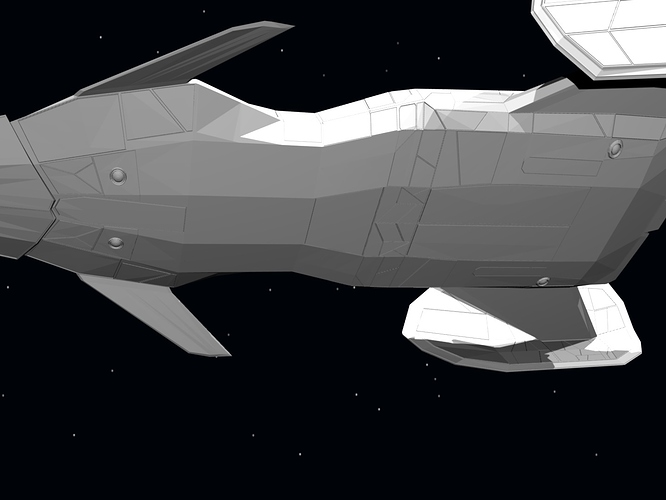 I think it needs openings: for things like fuel, electricity, hydraulic fluid. Maybe just on one side have a panel with a whole bunch of connectors on it.

I think that it’s wings are part of it’s armour, to stop bullets from the side being able to penetrate the hull behind the pilot. The could also house a whole bunch of things: fuel, shield generators etc.

good point, and yes i was thinking of adding hydraulic lines and such but also thought that we would not really want something like that exposed, but your right it would add more detail to the model. i already put the fuel inlet it is on the top set back from the cockpit. right now i am using mirror modifier but as soon as i join the two models i was going to remove the fuel input on one side.

well the heavy lifting is finally done, now comes all the small details to set this apart, stuff like rivets, guns missiles and so on. another good point for having wings on a space fighter is it gives you a place to mount missiles. Honestly i find it odd HR that you would think it illogical to add wings to a fighter, if you really think about it it is more Logical to add the wings, think about let say hypothetically this universe that we are building was real, and we were attacked by an Alien race. now you launch fighters to help fight against this race but the fight does not stay strictly is space but moves into atmosphere? i mean it would have to right? your bad guys would want to send in drop ships right? would you not want a fighter capable of chasing those ships down? I do have models of ships that cannot enter atmo, but i felt a fighter would have to. take the freighter for instance it has no ability to enter atmo, all freight would have to be shipped up to a station were the freighter could be loaded. Guns not done yet but making progress. 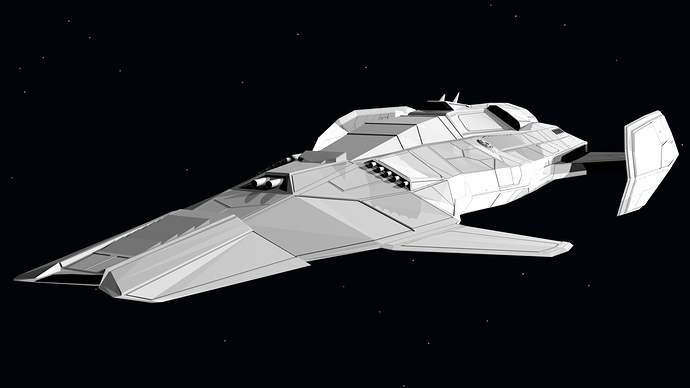 Great work, and very good job on the detail!

Interesting story as well.
Will there be “Alien” tech included, in terms of piloting such vehicles or customizing them with this/these technology(ies). Or is this still to be thought through?

Great work, and very good job on the detail!

thank you Raven working had to make more progress on the model, it is now at that stage were i need to unwrap it but being i am still new at that its going to take some time. i have more to the story but i wanted to get as much of it put out there so you guys can see what i am attempting here.

Interesting story as well.
Will there be “Alien” tech included, in terms of piloting such vehicles or customizing them with this/these technology(ies). Or is this still to be thought through?

Most defiantly going to be some alien tech, but for the time being i want to try to keep it simple as i really dont know how i would go about customizations, but there will be some good tech. the tried and true slug throwers for instance will get a complete redesign so they can function is space. the plan is to be able to expand the game later on as things progress but initially we want to keep it somewhat small and manageable so we don’t get in over our heads.

for now the plan is to use the BGE later we may move to another engine but for now we are content to build a simple fun game for the blender community.

also if anyone wants to help let me know, or if you have any models you would like to donate to the game. there is no intention of selling this game just a fun project for us and the people who would play it. if you are interested i set up a drop box but i am new to using it so send me a PM and tell me what you are capable of doing thanks all.

working on one of the buildings for the first level now, building the high poly model over the low poly model, i am using the tutorial from CG cookie for building a brick wall. i don’t know if this is the right process but it seems to be working. I have lots of buildings to model so i was hoping that there would be a faster way to do this. 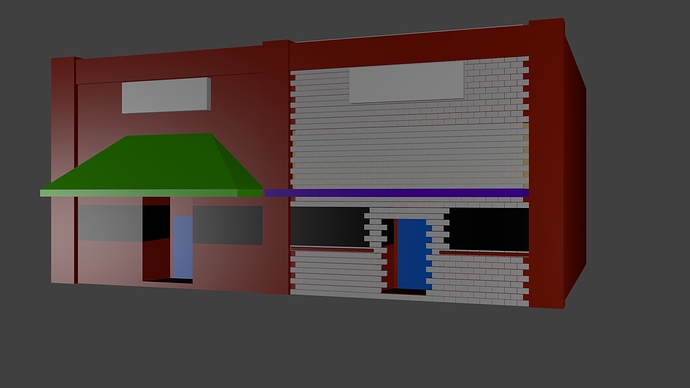 I used google earth to pull up a section of a stevensville Montana, i then took a screen shot of the over view of the town and then went to street level and started taking screen shots of the buildings. i am using those in blender as background images to model the buildings, latter i will put those buildings in place essentially building a 3D map of the town that i will use as the level for the first part of the game. 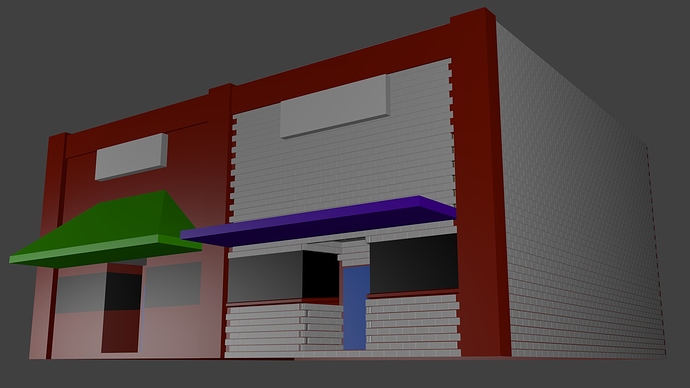 i wonder, do i have to do this as a multi texture? or do i model the whole thing and make one texture? 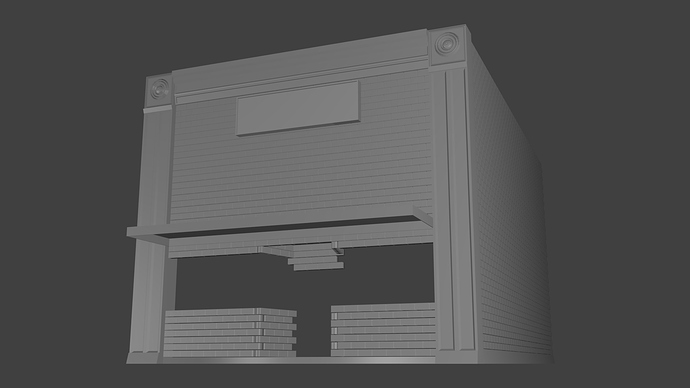 adding the building as it stands now with out the low poly version of it. it is moving along a lot faster than i thought.

this thing has gone together fast, cant wait to get more done for the first map but you guys know how that goes. and the way it will come together in game. 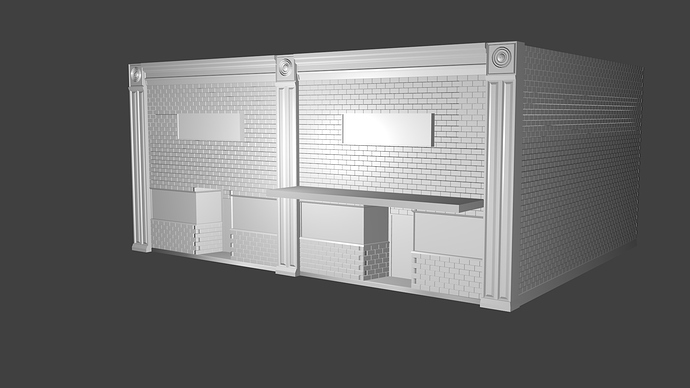 Thank you Raven, i cant tell you how much CG Cookie and the people here have helped me build my skill’s, well I’m headed for bed but thought i would show you guys the model at its latest stage its almost done next i am going to build a house then i think i will hit up the church and after that a gas station. 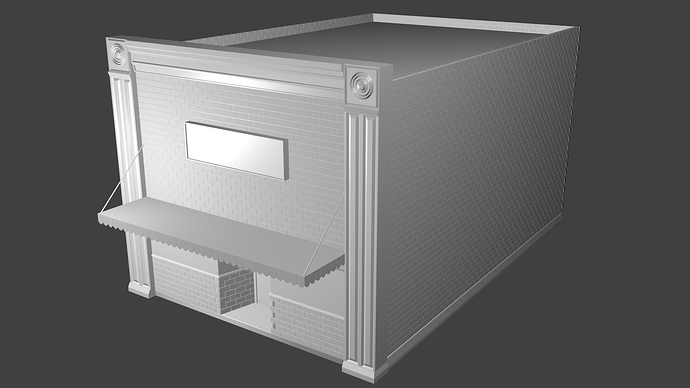 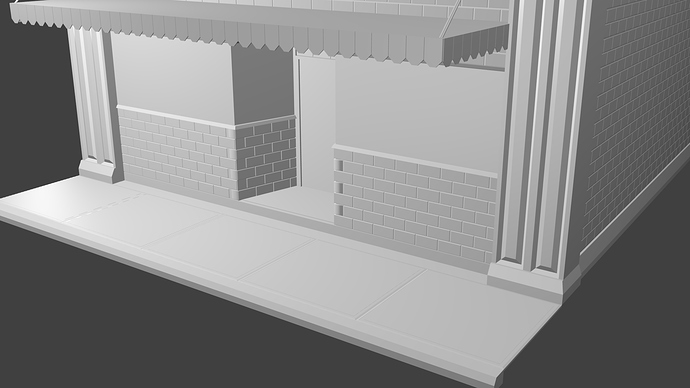 All these inter-stellar vessels and people are still using bricks? Haha. Looks really nice, very good work. Keep it up.