The Scales of Truth/ Anubis

Hi fellow artists,
This project was so fun to make! It was made for a weekly competition at pwnisher’s discord server “Create with Clint”. The theme of the competition was Balance, so I created this scene inspired from the ancient Egyptian mythology.
In Egyptian mythology, upon dying people’s hearts were weighed on a scale against a feather ( which represented Ma’at, the goddess of truth, justice and balance). Hearts heavier than the feather of Ma’at were rejected and eaten by Ammit, while hearts lighter than the feather of Ma’at were accepted in the field of reeds.
For this project I used Poliigon textures and plants and rocks from Blender Guru’s Rock Essentials, while everything else except the man was modeled by me. The project was made in Blender 2.92 and rendered with Cycles (5 hours, 4k/ 350 samples on Nvidia mx150). Post-processing was made in Adobe Lightroom.
I would love to hear any thoughts you have on this scene! 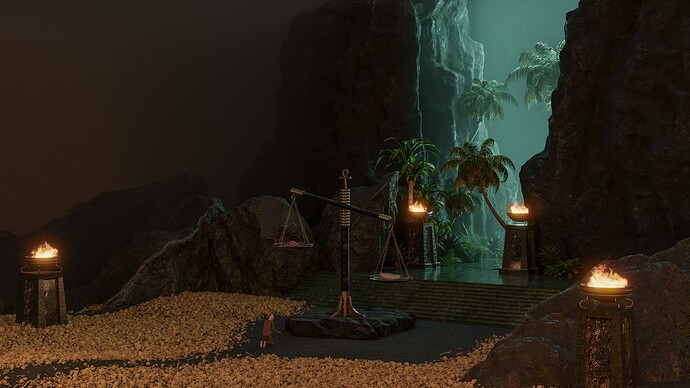