Once upon a time, there was a woman named Amelie who was passionate about scuba diving and discovering historical sites buried under the ocean.
One day, she heard about a legend that an ancient Buddhist temple was swallowed up underwater during an earthquake centuries ago.

Amelie was fascinated by this story and determined to discover this lost temple.
She spent months studying charts and planning her diving mission. Finally, the day of her great expedition arrived.

With her scuba gear and map in hand, Amelie dove into the depths of the ocean in search of the missing temple.
After many hours of searching, she finally saw something familiar through the mist of the water: the outline of a stone building.

Amelie swam as fast as she could, and as she got closer, she saw that this was the temple she had been searching for.
She explored every nook and cranny of the building, admiring the Buddha statues and the ancient frescoes that adorned the walls.
She even found an old Sanskrit inscription that told the story of the temple and its founding centuries ago.

Amelie was fascinated by her discovery and determined to share this wonder with the world.
She took photos and did extensive research on the temple and its historical significance.
Finally, she presented her findings to a group of historians and researchers, who were as amazed as she was by what she had discovered.

Amelie’s lost Buddhist temple became a popular tourist attraction and pilgrimage site for Buddhist devotees from around the world. Amelie became a hero to all those who are passionate about history and discovery, and her name has remained associated with this incredible discovery forever. 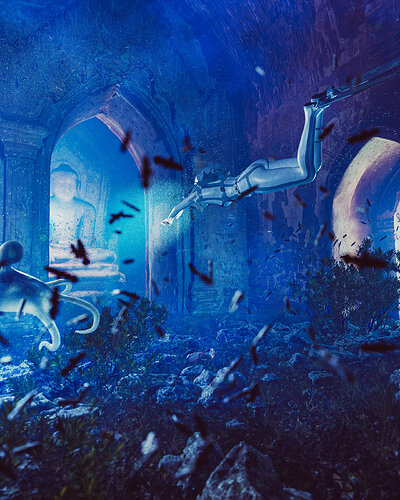