They drive by night 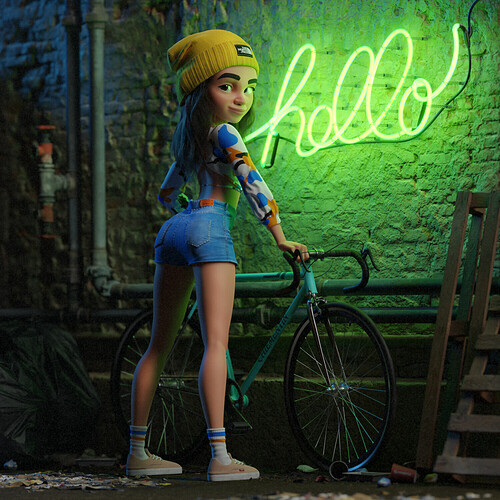 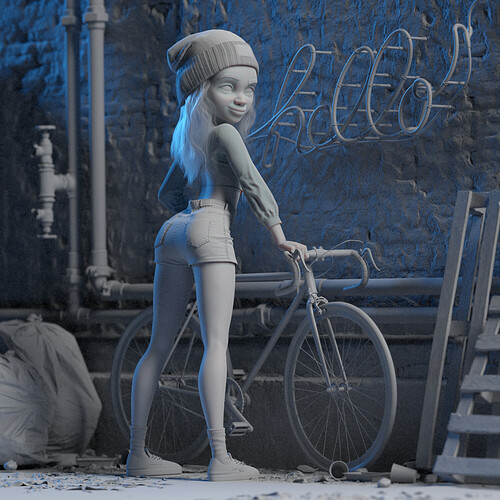 Nice mixture of photorealism and cartoony style. I am very impressed by the wall and neon lights on it (just my photorealism taste).

Something tells me that girl wanted to show her ass though

This is great! As a bike guy I approve.

Nice work, she so brave.
I need to learn sculpting characters. God luck.

Not so happy about the minor oversexualisation on the result image though. She looks like 12, 15 at most.

Right, I agree. From an technical point it looks great, but the message he delivers is really strange.

Please keep replies on topic, it’s fine if you disagree with the style or artistic choices of an artist but this is not really the way to discuss it. No accusations of “pedophilia” are permitted, and honestly speaking, if you see this piece as sexual, that’s your problem, not the artist’s. There’s nothing inherently sexual here and if you’re uncomfortable with the idea of what you assume is a teenager (and a fictional one at that) wearing short shorts… again, that’s a you problem, don’t muddy up this thread with it.

It is your decision as admin to do whatever you see fit here. I see something wrong, I say it. Judging the overall composition of the picture, her over exaggerated, stylized figure, posture and the look. I’m not trashing everything here, the colour tonality and setting is very nice and if you were to describe the draft of the picture to me, I’d like it in general. I simply find the result offensive the way you find offensive my reaction.

Anime/hentai similarities and obvious problem was already well explained by Lux above. The way young girls feel pressure to measure themselves to “ideals” such as this one on the picture makes this even worse.

There’s a huge difference between portraying teenagers in My neighborough Totoro and Girls und Panzer. Similarly, the same shift can be seen lately in western animation too. Almost no animation studio today draws princesses and female protagonists as they were originally portraited - as adults. Pick literally any IP from Disney and prove me wrong.

Again, if the author is teenager, hats off and I take it back. If he’s 20+, it starts to shift into lewd territory.

Bonus: why does it matter is she’s real or fictional? That doesn’t change anything here. Remind me the “she’s actually 2000 years old” fallacy.

Also, what Lux said above is pretty much what I said. He was just very polite there. I squazed it into one sentence. And got a different treatment here.

If author has some thought on their own, I’m open for mature discussion. Maybe I’m wrong after all like you said. Would be better if that would be explained to me by OP instead of hiding my messages by You.

Your message was hidden because it accused the OP of pedophilia, which is an inappropriate way to express your opinion here.

There’s a difference between critiquing art and calling someone a pedophile. One is ok and the other is a personal attack and is not ok.

Again, the perceived sexuality of society as portrayed through art is off-topic for this thread, so let’s let this discussion die, thanks!

Btw., I invited my mother just now to see this art. She pretty much agreed with my opinion on it, as a grown woman.

And Donald Duck isn’t even wearing any trousers. And have you ever seen a realistic female by Walt Disney? And guess what every actor in the movies or TV is wearing make-up… it’s all fake