I made another sports car concept. It is a rear-mid engine v12 coupe with all-wheel drive.

This was rendered in cycles with a little post processing in blender and photoshop. Everything was made in blender, including the tunnel in the first image and the forest in the last image. 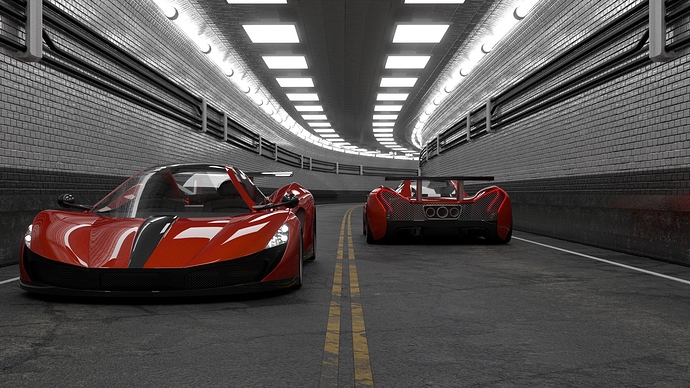 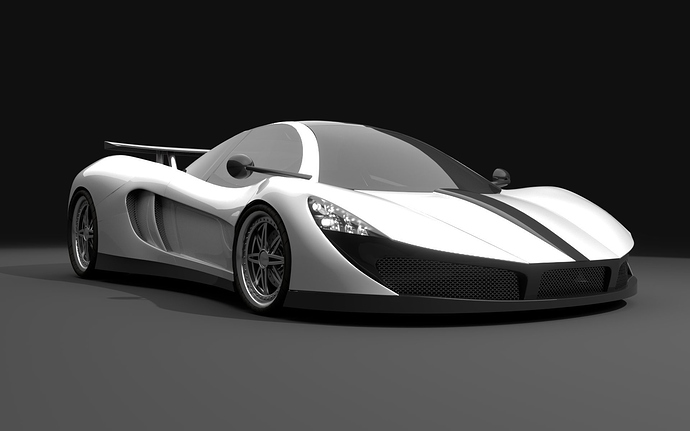 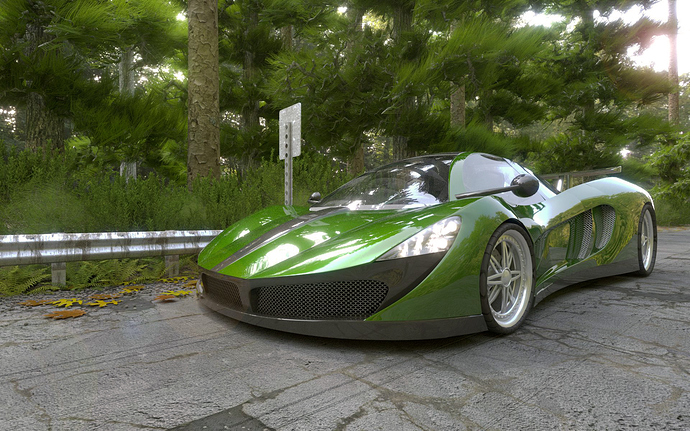 Hi, Crimsonbard. The car model and material looks super! Two things : 1) The bricks look too glossy. 2) Try some postpro “improvements” like chromatic aberration, barrel distortion, color balance. Also you can add a dramatic lighting to the final image. Well, this is optional. Otherwise it looks beautiful. 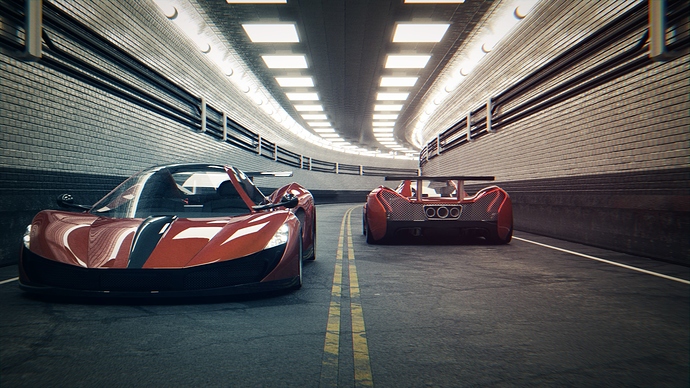 Dat stance doe! I really like your design, its got nice curves… Also kudos for designing your own car, its more difficult than making an existing one ihmo (although I can see some heavy P1 influence, hehe). The car’s really nice, but the wheels look a bit too small, and although I understand that with smaller wheels you can make the car lower, but if you take a look at most supercars, you’ll notice that the wheels are proportionally bigger. This is because the bigger the wheel, the more traction you can get, just look at a tractor. |<< I deduced that myself so I might as well be wrong |

Another little tip: give some camber to the wheels, and you can even make the tyre squeeze effect on the bottom of it to get even more realism. I find the latter easy to do with a lattice modifier.

One thing I have to say though, I love the scenes you modelled for your car, they look really good!

Maybe we could do a collab sometime (after my holidays)?

Great composition and design! I enjoy the detail you took in the scenery.

@Sebastian Zapata: Thanks! The way you tweaked the image looks awesome also! I was going more for realism though, but for a stylized image I would have to try out what you suggested. It would be awesome to try adding some volumetrics too if I get around to it.

@Impreza09: Thanks also! The front wheels may be a little small, but the back wheels are normally sized. As it turns out the front rims are 17’ rims while the back rims are 21’ rims, so I may need to change the front rims at least. I also would have never thought about adding tire squeeze to improve realism. I’m glad you liked the scenes also! I always like modeling a scene for the sports cars I make because it also gives me practice making landscapes in addition to making sports cars.

In my opinion, I find that designing my own supercars is easier simply because the car doesn’t have too look exactly like the original because there is no original to compare it to. I found it so much harder trying to model a Mclaren P1 than this sports car because it took me a very long time to make the P1 look like it should.

As for the influence, I did look at a lot of Mclaren P1 reference photos, but I also looked at some Lamborghini Aventador reference photos for modeling the air intake to the side.

Also, what did you have in mind about collaborating? Maybe you could PM me with some specifics.
Thanks again!

Cool stuff, though instantly after seeing this http://envyd.com/wp-content/uploads/2013/01/mclaren-p1-11.jpg came to my mind

@jjjuho: The more and more I look back on this, the more it looks like the P1. I guess a more fitting name for this project may be the new Mclaren P2 concept :eyebrowlift:.

has something of the ferrari 458

Glad you guys like it! I could also see the resemblance to a Ferrari 458. It’s got a similar stance and curves to it.

good work on this render!