this might be a dumb question about face topology but...

I really would like to know. i am wondering, if face topology is the same, well in general, I know some compared to others will be a little different but, how does the mesh exactly form there face? I mean is box modeling more detailed compared to edge modeling? I guess box modeling a face is more detail according to the first image I found.

but anyway, I am wondering how and I would like to accomplish this detail but you see the picture I have below of Angela Joli. that topology seems very detail compared to the last picture 3rd pic girl with green eyes. her mesh doesn’t really have that much detail as the others. . I am wondering why? the Arnold is less poly than her and it looks like him 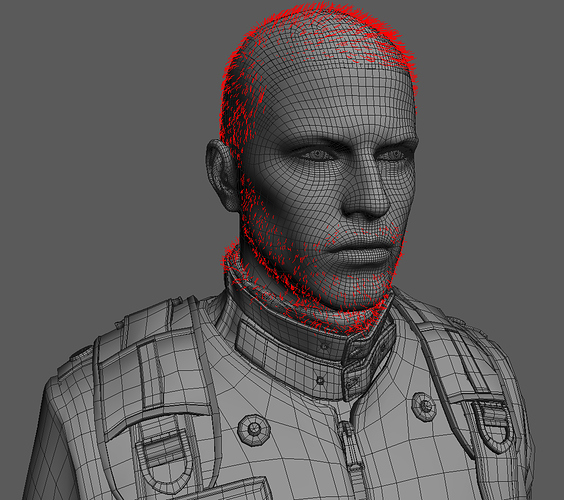 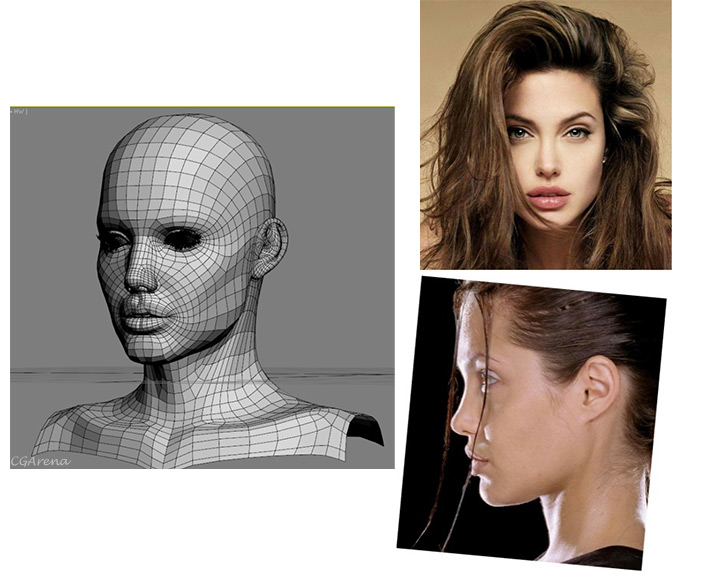 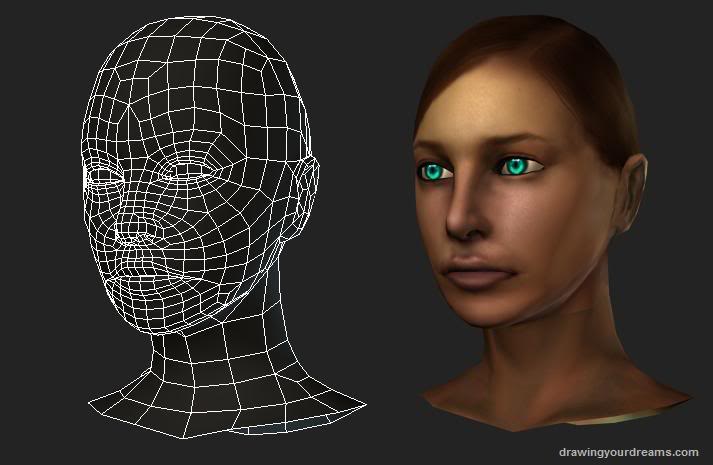 this is the Arnold pic that is low poly but looks like him, the 3rd pic doesn’t look like that girl .Clint Eastwood looks like him 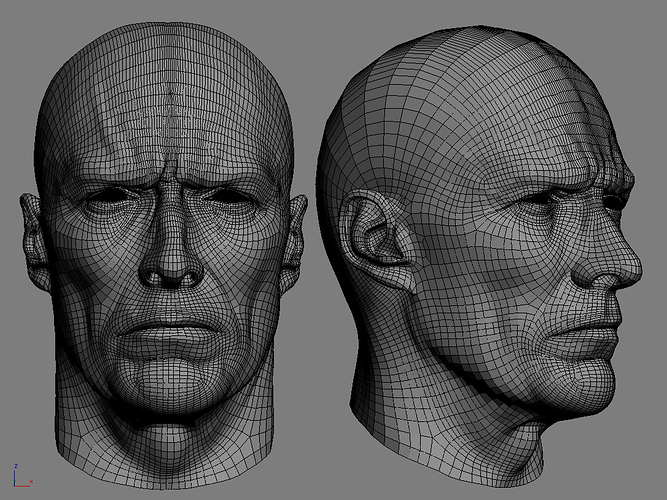 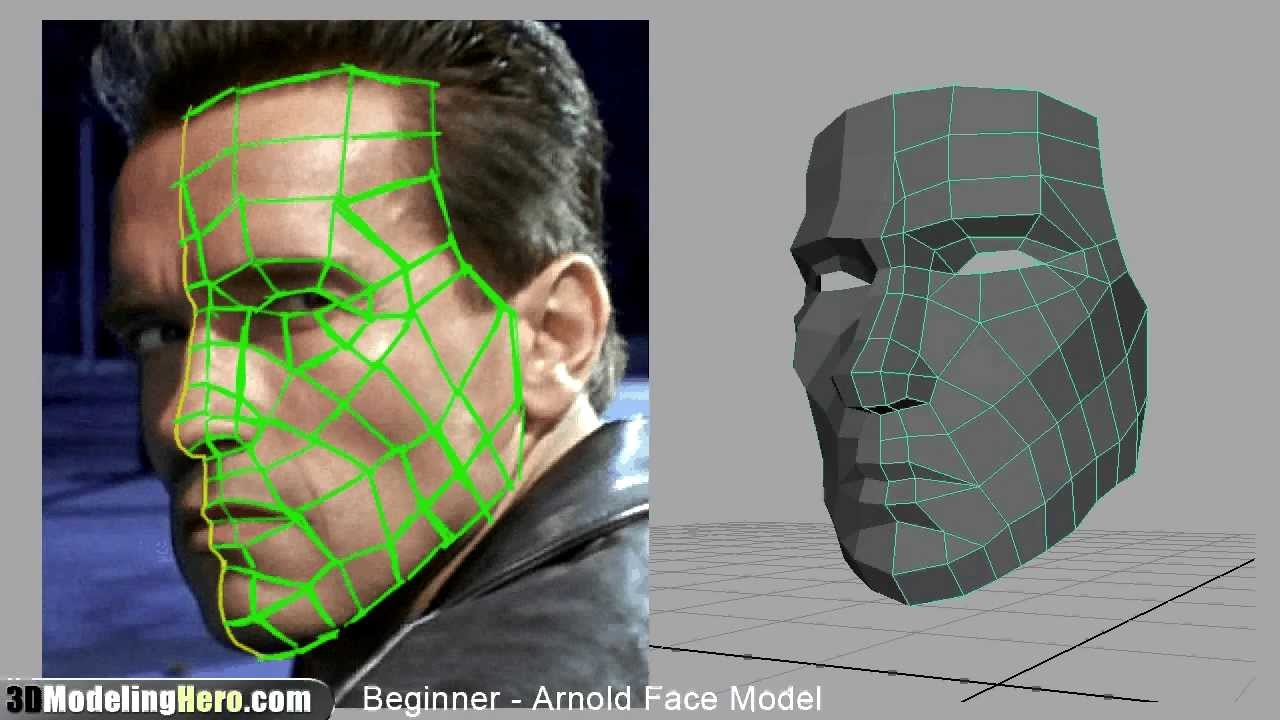 box modelling is optional, and you should not make the actuall model form the box model itself. you only use that model as referance while modelling the actuall character. it will make it easier to get the scales right and you wont have to do as much tweeking afterwards.

about the topology… there is no “correct” or “wrong” way of doing it, there is just “better” and “worse”… it also depends on what the character is for, if its a video game, then you might want to try to limit the amount of polygons and only have as much as you need.

if its a still image, then you dont have to worry as much about how many polygons you have, and the loop flow is not AS important. now you just need to keep the topology clean, and easy to work with.

it is not the density of the basemesh, or the topology, that makes likeness… the angela jolie mesh is very well done, it shows bonestructure and facial muscles already, her planes of the head are well captured, and the mesh has a very good topology on top of that. the other girl mesh, has no bonestructure modeled in, in fact, just the broad outlines are modeled of the face, the rest is hoped here the texture would do. which it does not. never will. the model foundation needs be well, to make a textured head look good.
the arnold mesh is very well done in terms of proportions, that is why a faint likeness is there. the bonestructure however is missing, prominet cheekbones or forms around the mouth,for example, . the topology around mouth will make further work on this mesh difficult.
the likeness of eastwood is not very strong, since there are proportional errors. faint likeness is there because the typical brow squeze he shows is modeled. the model has already quite a lot of polygons but most of them are wasted.

so: the essential is to capture good proportions, and make the mesh as light as possible. likeness comes, as the jolie mesh shows, from good proportions and attention to the correct big forms and planes of the head. not the details… when you have this likeness, you can add details as much as your heart desires, and the likeness will stay… if you begin with a too dense mesh, like the eastwood mesh, it is hard to capture the big forms, and no detail will bring in the true likeness and any changes will be a pain, as too many vertices have to be moved…

THANKS GUY, I am going to watch Jonathan Williamson topology videos but, I am also trying to find more info on this. so basically loops are better and the reason the Angela Jolie is more detailed is because of the cheekbones?

When it comes to likeness, it all has to do with key features;characteristic forms and spacing. That is how we recognize faces. Here is the main feature of Angelina Jolie described by simple lines,shapes and spacing:

An additional problem when using actresses photo as reference is that most of the time those photos have gone through photoshop-like application to smooth/remove the wrinkles and seriously lessen the more apparent bone structures.

Something you don’t have much problem with when it comes to men actors, as wrinkles and prominent bones are usually considered to give “character” to the actors face.

So when looking for photo reference of women actresses, it’s best not looking for “official” photos took by the professionals, those are usually photoshopped to fit their petty world of appearance, but look more for photos that were took by regular people in which you’ll then be able to see more clearly and realistically how the actress head you’re trying to model is built.

The actual detail of the mesh has nothing to do with the method used to create it. You can use box modeling, poly modeling, or retopo a sculpt and the detail will only be determined by the amount of polygons you have.

As for the likenes, you should have as many reference photos in all the angles as you can get, and with a neutral expression if possible.
When modeling, try to get the basic form and proportions of the head with few polygons (like the Arnold pic), once you have some likeness in that model you can start to add detail while maintaining the shape.

Check hippydrome.com to see how to build the mesh with good topology, is a little bit technical but understanding how to build a mesh with the correct loop flow will help you a lot. Specially if you’re going to use the mesh for animation.