Tiling a Texture in the UV/Image Editor

I have a fairly small brick texture I’m trying to map to a very strange Y shaped support structure. I would like the texture to repeat fairly often across the shape so that the bricks appear fairly small on the model. To do this, I’ve scaled up the UV coords in the UV/Image Editor such that some of the points fall beyond the boundaries of the texture. This makes it very difficult to edit the texture coords that fall outside the image rendered in the UV Editor panel; I cannot actually see how they are lining up with the texture.

Is there any way to repeat the texture continuously in the UV/Image Editor so that I can see where points falling outside of the initial image will map onto the repeated portion of the texture?

In the UV/Image Editor do the following:

That is exactly the functionality I was hoping for, it’s just not where I want it. I would basically like the behavior of the Material Preview panel, except within the UV/Image Editor itself. 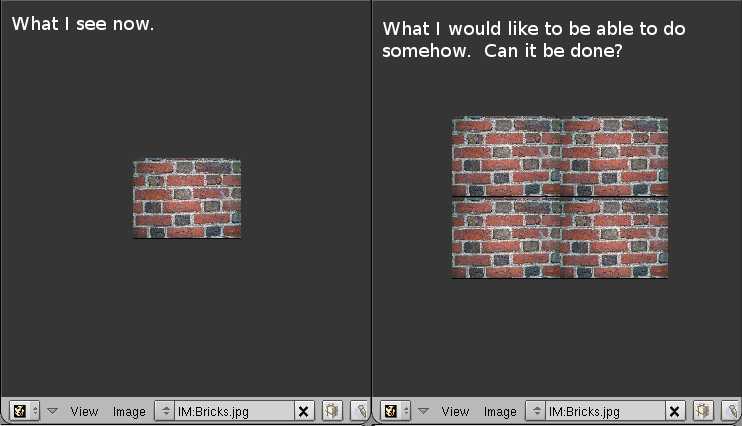 I honestly don’t know, but if you need the texture to line up at the seams it might to better to make a custom texture image. You can save the UV unwrap, and use it as a background layer in an image editor to make a texture image that will suit your needs.

EDIT - It is possible you could do this with an SVN build, though it may not work the way you want it to. If you don’t want to build your own, try downloading a recent build for your system from Graphicall.org and have a look at the ‘View Properties’ panel in the UV/Image Editor.

just in case anyone else ends up here 14 years later

Here’s where you do it now: 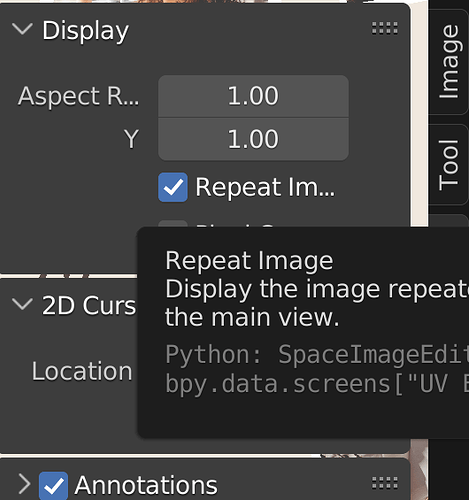 Thanks! Saved my day!!

Hey all! I apparemtly dared closing a 14-year-old post with a solution. If someone objects to this, let me know

I wonder though, would it be useful to keep all posts of this nature open, just in case the option moves again and then someone else can update it? I can’t imagine people will obscure the solution by coming here to hang out and chat, and even if they did, the link to the solution is shown at the top of the thread anyway.

Posts are only closed if they turn into a dumpster fire. This post and others will remain open until the end of time.

That being said, I see no reason to continue discussion on this post, as it’s an old question with a marked solution now. This further discussion could also veer into off topic territory pretty quickly, so I say we let this die naturally

Well, I removed the solution. However it is an old post, and I am not sure these are worth being kept open.

Nowadays, the simple answer would be a Mapping node and that’s it. Not sure if, in some cases, a 14 year old solution, or Blender version of olds didn’t pose a mixup chance in some other cases, considering, that Blender improved.

Also, if something is marked as solved, the engine will still find it, looking much appealing to a new seeker, compared to an open post, I guess

A mapping node isn’t anything to do with the question, the question was how to get the uv editor to show the tiled image instead of showing it just once in the middle

but, anyways, when a solution is sure and discussed (maybe of more than one), I usually support marking it solved.

yes it would be nice to mark it solved and leave it open, then if the solution changes, someone can add the new solution and ask it be marked as such eh.