I’m into 80’s/90’s SF movies and I want to design my own spaceship like from those movies. However, firstly I don’t know where to start, and secondly, I’m not sure how to keep myself from copying another person’s design. How much should I be concerned about copying anyway? And what is the best approach for making a unique design that is in my style? The designs I’m asking about are for the ships based after either warships or airplanes.

As a space ship designer for an up and coming miniature space combat game that will be released this fall, we had to do some research. Our designs want to mimic the styles that were 1940’s and 1950’s designs. So study art from the period and determine what makes the styles interesting. What makes them unique? Is there much surface detail? What about symetry? What about weapons?

Start picking out the best design elements that you like and then incorporate them into your own designs.

Or at least look at the Freespace 2 Ship Database
If you click on a ship and then click on its class you can get pictures and more detailed information. There’s a lot of different classes of ships there.

Now you start thinking in terms of space flight.

Nearly everything is built out of a superstructure or ‘skeleton’ that has to handle the stresses of distributed mass under motion – at enormous accelerations. Think relativistic speeds. No existing material can handle that, though metal-matrix composites and monomolecular fibers suggest future directions.

Speaking of relativistic velocities: the smallest particle hitting the ship can be catastrophic. The ‘void’ isn’t empty. At the very least, you’ll stumble (again, at very high speeds) into an atom of hydrogen here and there. You need yet another system (or systems) to take care of that. And you also need to defend your ship and crew from extreme cold and hot, radiations of all kinds, contaminants, etc. Life support involves a whole lot more than one first believes.

You’ll need a lot of power and a way to channel it, store it and transform it for both domestic and heavy-duty applications. What’s your engine running on? Fission? Fusion? Annihilation? A singularity?

Do your research. Know what you’re talking about.

And for the love of Pete, don’t go the Star Trek way: magical materials and made-up particles are all passé. It’s best to avoid discussing internals, but if you just can’t help it, use a technician’s (not an engineer’s) point of view: mention the principles only superficially, and tie them loosely to existing theories.

It pays to do several sketches. My approach is to use an element loosely based from a combination of existing designs. Hope you have a great model!

Hey im into spaceship designs too. Here is my latest one. Its not even half way finished but im slowly working on it. I find it the best to do some sketches before doing anything. You are ok to copy few things from different designs just dont make it noticable. 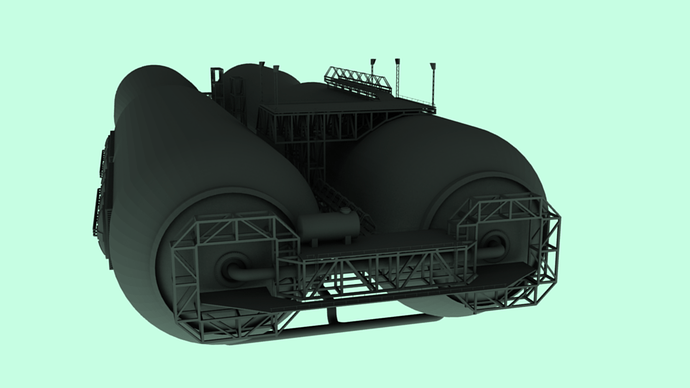 Theres nothing wrong with taking other ideas, just as long as u dont copy complete ships and make them look very similar. I usually look at a bunch of ships for ideas, and find the things I like about a certain ship, then either take that part and use it, or make it better for what Im wanting.

The best thing to do is to think about what your ship is for. Is it large transport? a small personal cruiser? huge battleship? some kind of scientific research ship?

Once you know its purpose you can start thinking about the overall shape, and the components it will need. As mentioned above think about the engines, also where the cockpit will be, the cargo bays, medical bays, weapons, landing gear, antenna/communication equipment and armor plating etc etc etc, it all depends on the ships purpose. Perhaps write it all down as your working it out.

To me the most important part is making everything look like it does something. This will make the ship look like it has a purpose and is more realistic.

After all that I’d be looking at Greebles, quite important - http://en.wikipedia.org/wiki/Greeble

Hope that all helps, its just my way of thinking about ship design (in a nutshell) :yes:

when you’re learning, don’t worry about copying someone else’s work…

if you haven’t designed a space ship before, try copying one of the designs first… this will take the overhead of thinking about the design and let you focus on the building process itself… once you learn the ins and outs of building it, think about an original design

Alchemy can be a great starting point for getting lots of shapes down quickly, here’s the link http://al.chemy.org/videos/

Now you start thinking in terms of space flight.

I’ve been referred to your site a couple of times, and it was really helpful. Thanks.

macro-shapes first, the big shapes. try and find a motif for the race of the ship you’re working on.

Like in star wars you could always tell the regular rebel ships from the mon calimari ships because the mon calimari had this huge, soft, bubbly type of ship, always long and broad and flat and nodular, like big pieces of drift-wood. They looked organic and watery, like you’d expect.

And you could tell the rebel fighters from the imperial fighters, because the imperials were hard, angular, efficient shapes and bright contrasts, (just google image search ‘shuttle tydirum’, ‘tie fighter’, ‘tie interceptor’, ‘star destroyer’, ‘super star destroyer’) and hugely animal and impersonal in many ways, and rebel ships always had open, visible cockpits with utilitarian doors, and more standard wings. The rebel ships LOOKED like fighters, like you could find something human in them if you tried. The imperial ships looked like autonomous metal blobs with about as much humanity as a jagged piece of metal.

And to that end, much of the imperial stuff looked hugely animal. The shuttle tydirium cockpit is angled down, and has its visor-black window at roughly the same location as a dog would have. The AT-ATs and AT-STs (google image search for these as well) cockpits are all designed on heads, for inspiration, with the AT-ST particularly designed after a human skull. The AT-ST has hollow, blank eye-socket-shaped tinted windows, to give it a skeletal look, and the AT-AT has a heavy, protruding, almost crushingly low brow, to give it the brutish, blindly malevolent look we’d expect out of a thug. It all registers on the sub-conscious at some point.

The rebels stuff, on the other hand, looks totally utilitarian and in a way slightly reminiscent of very, very old war equipment (although not for example in the same way that the quad guns on the millennium falcon, or the cannon batteries on the Death Star and Imperial Star Destroyers do), like old howitzers and what-have-you, and their capital ship shapes are often bulky or lumpy, and slightly unbalanced-looking, (although never actually unbalanced, visually, because they were expertly designed), and this appearance of gently lumbering inefficiency gives them a very… sympathetic look. Very underdoggy.

It all registers on the sub-conscious sooner or later, so get your concept ideas right first and everything else will just fall into place.

Once you have some concept ideas, I’ll tell you a bit about shape balance, proportions and silhouettes, if you don’t know about that already.

@ZombieJohn: Your post was very interesting and eye-opening. Do you have any further examples, information or links about it? To paraphrase Starship Troopers (the movie): I’d like to know more:)

About concepting, or about the more technical side of things (silhouette, balance, proportion)?

Like, there is a whole wealth of information on the subject. Where would you want to start?

About concepting, or about the more technical side of things (silhouette, balance, proportion)?

Like, there is a whole wealth of information on the subject. Where would you want to start?

About creating models that “register in the subconscious”, as you put it, leaving a very specific impression. So I guess concepting it is.

Thinking about it, it is all about using a thing already known to the audience and interpreting it in new ways, i.e. the AT-AT looking a bit like an elephant trampling on everything in its path: It’s huge, and you can’t do anything to stop it.

Incidentally, the way the rebels brought the AT-AT down was very much like capturing an animal, I would guess.

Another example: The stormtrooper’s uniforms hide even the face, so that they are completely without individualism, making them both more difficult to identify with and less sympathetic (after all, who wants to be just a copy of someone else?). Also, their masks look nothing like a human face, dehumanising them further (and making the rebels look less bad when they kill them by the dozen).

Then again, the stormtroopers are in some ways a subversion of commonly used concepts in that their uniform is white instead of black.