sorry, the one i meant was the pebble / rocks
sorry to mess you around, but the other angle looked better, as you got more colour, maybe you could do a render from that angle, but move the camera down a bit to let us see inside

also the texture on the left looks a little low-res
for realsim, you might want to also add some barriers or something on the side of those cliffs, they would never be that sharp and clean.

Hy, I messed a little bit around.
Two new renders: 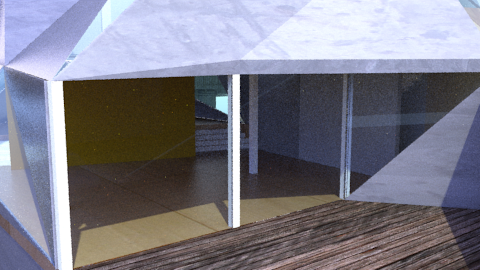 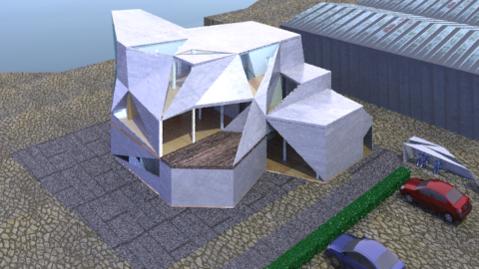 What do you think? Better?

I have added a hdri sky, because it’s much nicer.
Now I’m making this render in which you can actually see the sky.
The thing is that the sky only shows a flew white and blue spot instead of clouds.
When I open this hdr image in an image editor it shows nice clouds.
Any idea what I can do to change this?
I also wanted to make a render with sunset. So the sky needs to look rather redish. But apperently changing the colour of the sky in blenders interface doesn’t change the sky in yafaray. How do I change this? Keep in mind that I’m using a hdr image as sky.

Use a sunset hdr image for the sky, use Yafaray’s Sunsky option, or composite with a photograph.

This is a fairly-complicated scene which might well benefit from compositing. You’re attempting to do a lot of things “at once,” and as you see, you’re spending a lot of computer time (re-)doing it. But, if you took a compositing-based approach, you could work on each distinct component of the picture separately.

More to the point … when you go to combine the various separately-rendered elements together, it suddenly “makes no difference at all” whether the various elements were rendered using the same render-settings at all. They simply have to look plausible together. (And if they don’t, you can probably address the issue without re-rendering.)

It is usually the case that “most of the image looks just fine except for …” and this is certainly the case here. For instance, in the latest image there’s a rather obvious “tiling pattern” visible in the grass. And, the question before the court is, “how much work” are you going to have to (re-)do in order to fix that problem? The best answer ought to be, “less than five minutes, maybe three, and this on a very-pokey old computer.”

I freely admit that I was forced, kicking and screaming, into the world of compositing many years ago because I tend(ed…) to use computers that can barely get out of their own way. But once I realized what it could do, and even though “nodes” were just a gleam in some software-designer’s eye at the time, I never turned back. The ability to actually, realistically, adjust what you have done, without laboriously starting over, is “priceless.”

What you are describing really sounds like heavenXD
As I allready mentionned I’m in a bit of a time problem.
If I can get some decent results with compositing without spending too much time on learning it, I could actually get some benifit out of it.

Could you maybe show me some tutorials or guides to tell me how this works.
Especially mind that I’m working with yafaray, I’m not really certain of how this works with compositing.

Hy again,
The project is now finished. All the renders were made.
The renders could be better, but due to the time problem I don’t really care XD
I just want to thank everyone for helping me. I also read all the additional links which were very interessting.

For those who are interessted, here is a link too my deviantart account, and you can find all the renders there. link
Just for those who want to know what the result is.

Anyway, I’ve learned a lot and thanks to all

The background doesn’t add up, the lightning in the background and upfront doesn’t match. Keep a consistent lightning throughout. I prefer a HDRI lighting. For better result you can have a volumetrics added up to give finer look.