So I’m making a game with blasterjak and mcguinnessdr called project lowpoly. It’s a game based on physics, interactivity and gameplay instead of fancy graphics. It’s been going quite slowly recently but it hasn’t stopped. In the game there’s a tool called the PM (physics modifier) which can stop time, change gravity bla bla bla. Now in the games aim mode where you can select certain objects the idea is to apply a toon outline on that object to show that it’s currently selected or if there isn’t one to show it can’t be modified.
I made a demo called toon.blend to show how it works but when I tried to put it into the game it doesn’t work. Could someone please say why it won’t work in the game and how to fix it.

and here’s the game. The cube is floating in the second room.
Edit: I’ve noticed it works when the reticle is over the cube and the player is in front of it 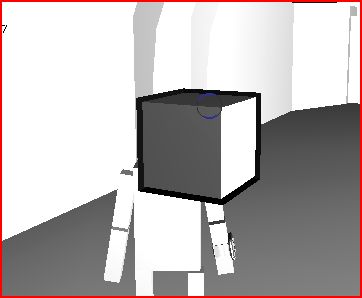 Please don’t bump threads just because nobody’s answered in LESS THAN A DAY. Christ, if it were 3 or 4 I could at least muster a little bit of sympathy, but as it stands… no. If your name is going be noob destroyer, act that way – destroy noobs, don’t be one.

I would offset your camera so that the recticle is to the right of the character a bit (a la Max Payne). That way your character won’t be in the way.

I showed the mouse and after you’ve clicked and gone into aim mode the mouse is over nothing but the cube. Could it be the reticle in the way?

Your character’s bounding sphere / object could be still in the way, even if it appears to not be. Since your blend file indicates it’s very close, then I’d still try offsetting the camera anyways. It’s better that way even from a user standpoint - it’s hard to figure out where you’re pointing when your character is in the way.

Thanks I’ll try that. Sorry about the bump, I’ve never bumped a thread before and I know I shouldn’t of done it.
Edit: it works.