As a little hobby, I’m making a top-down shooter (at the moment the theme is “zombies”)
I’ve got most of the gameplay mechanics worked out. I dunno what else to say, so I’ll just list random stuff. I’m using apricot, so be warned.

-WASD to move, LMB to fire/reload, rmb to kick
-at the moment zombie AI is just “track player, attack when close”
-you have infinite ammo, but must reload every ten shots.
-you can kick, doing minimal damage but stunning and pushing what you hit. I might make doors and stuff to kick in.
-there are no sounds or textures, and the animations are terrible.
-On my 8600, I get decent performance with shadows on (especially considering there are 6 casting lamps); I turned them off on the streetlamps by default, but they’re all linked so turn shadows on one lamp for dramatic effect. I left the flashlight shadow on, turn it off if you get too laggy (that’s the biggest source of lag in the game)
-at the moment there’s only one gun, but I plan on making more, adding powerups, and limited ammo.

The only issue I can see for now is the animations: they don’t want to start at the beginning of hte animation. for example when you kick, the animation starts in the middle, plays to the end, then plays back to the middle. setFrame() doesn’t work, and toggling the button that’s supposed to make animation won’t change anything because I’m changing settings on one action actuator for all animations, rather than adding a new one for each. did that make any sense?

That’s about all I can think of for now. Please critique and comment, I want to know what I can do to make it better.

[edit] I forgot the screenshot. 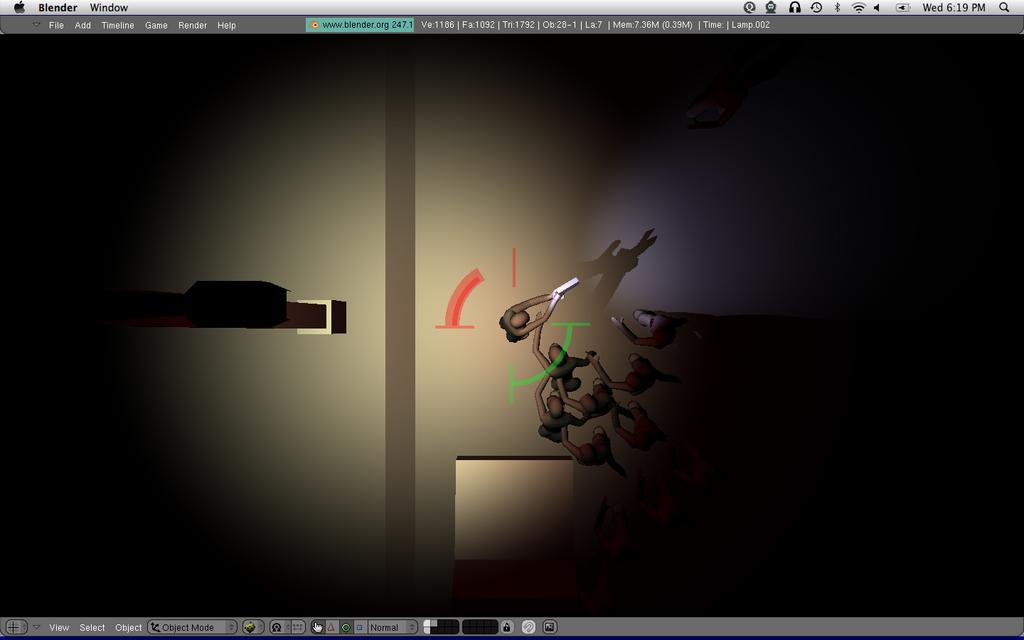 First Off…Its lame…JUSSKIDDING!!! IT RULES!!!
You might want to add some more lights and pack your textures…
I like the concept of the game

-there are no sounds or textures, and the animations are terrible.

No textures to pack

It’s pretty nice, could use a lot of polishing. no crits though!

yeah it’s pretty sad textures aren’t packed. I can’t see enemies coming. Maybe you should set up an state machines for the enemies this way they won’t attack in the same time.

Wow sorry…Yeah. I read most of the post…But i guess i should have read all this…

it crashes both? It works fine in apricot on my comp, I haven’t tested it with 2.47.

I like that you can’t see the zombies well, makes it scary when they are all of a sudden surrounding you.

Maybe add a mussel flash when you fire a shot.

Anyway good concept. I like that walking and shooting directions are independent actions.

Screenshots? I know you enough to dload but I don’t have glsl and I want to see it.

What’s Ironic about the screenshots is that usually I’m the one asking people to post them, and here I am forgetting to do it. Hypocrisy powers go! (see first post for screenshot)

very cool, thanks for sharing the blend.

I have some cool hit and run AI ideas i implimented into Game Maker years back, im sure it can be done in blender. Let me know if you need help