I apologise in advance for this question.
I have been using sketchup for several years. I am trying my best to get y head around blender. in this instance I have imported a Colada.dae file created in Sketchup to try and get my head around Evee rendering. I have watched videos and have imported the file, but honestly I have no idea what to do next. Can anyone point me in the right direction just to get started. 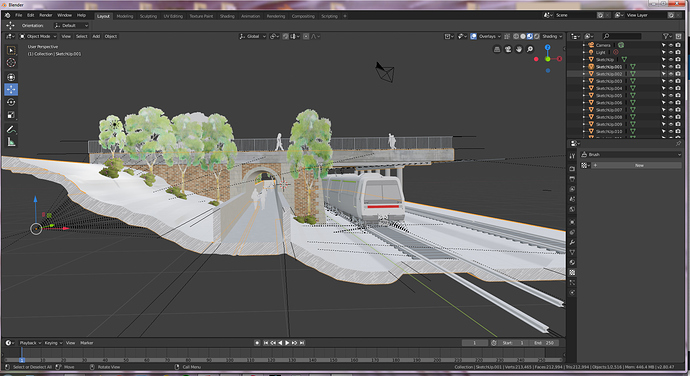 Have got as far as this 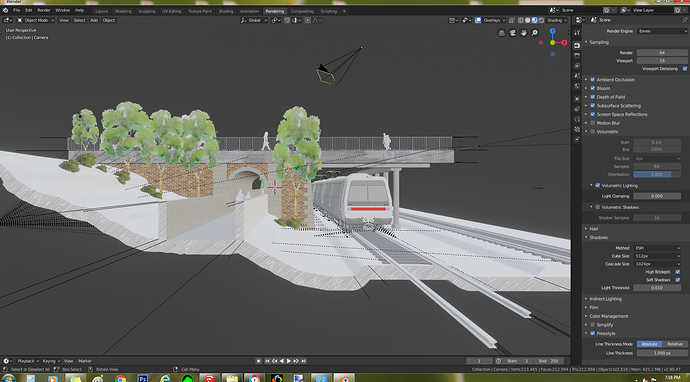 That’s a broad question and a copy of the blend-file would help.

Hi @stevd, I’m not sure, what your problem is exactly or what you want us to help with.

You want to see the rendered preview? Please enable the shading mode ‘rendered’ in the top right of the viewport.

If you want to render out a final image, press f12 to render and then f3 to save it.

The manual isn’t ready yet, a lot applies to the former Blender version still, but there’s a chapter about Eevee already, maybe you want to have a look: Eevee Renderer

you can make a still render by hitting F12 and go to the render tab.

But if you want to improve the rendering, you need to :

All these are broad subjects, so maybe you can tell us more about what you want to do so we can go a bit more into the details.

Thanks for the assistance and replies. Is feeling totally daunted by the Blender UI/workflow.
I have a lot of experince with Sketchup. Autocad. Archicad and various render engines, is it normal to feel so stupid trying to understand blender as I do now?

is it normal to feel so stupid trying to understand blender as I do now?

If you use 2.79 and follow its manual that is complete or videos based on 2.79; you could obtain a result for Cycles.
If you follow some tutorials for Cycles in 2.79. You should understand some basics of Blender UI for materials for EEVEE.
Problem is that 2.8 have a different UI with different icons and EEVEE have lights different than Cycles ones and lots of effects that are requiring a global enabling and use of light probes.

So, period to learn blender 2.8 is not ideal for people who don’t know blender at all.
Playing with 2.8, you may understand some things but not everything.
So, ask questions or renounce to obtain a render with EEVEE for next 3 months.

You haven’t asked a question, nor even said what it is you want to do with the imported scene, so you’re going to have to be more specific if people are to help you.

That said, importing a scene from Sketchup, while it will work, is not exactly the best way to get to know Blender. As you can probably see, your scene lacks any sort of organization. Everything is unnamed, parented to a single origin. Though some textures are set up, they’re probably not going to work very well with Blender in terms of surfacing. Also, though I can’t tell from the picture, I bet the geometry from sketchup lacks good topology and will be difficult to further edit in Blender, simply because the tools over here are somewhat different - slightly more low-level, closer to the metal so to speak.

If you want to learn Blender, you should try to do things the Blender way. To that end, I recommend you start a new project from scratch, one that isn’t very complicated, like a product visualization or some such maybe.

It’s true most tutorials available now are for 2.79, so I recommend you start with that for the very basics. Then, after you get the hang of it, switch to 2.8. This is not optimal, and will probably be somewhat frustrating when you make the switch because the list of changes is extensive (the biggest casualty being the keybindings), but still, it’s better than just trying to learn Blender 2.8 blindly without documentation of any kind.

I have downloaded 2.8 the UI seems more logical (relitivley) I have no plans to do much with the imported from sketchup image, I just wanted to experiment with it as I had it open in Sketchup. Normally when I have experimented with render engines, Twilight, Raylectron, Kerkythea, Etc I could start playing intuitively by just playing around. But Evee and cycles is very different. I feel like I am learning Japanese. I was not able to get to square 1 and muddle through from there. F 12 hint by Sozap will be a good start but will try that tommorrow and see where I get. I am quite exited by the idea of Evee, I guess there is a price to pay for that and that is a complex work flow. Thanks for getting back:)

Oh I guess my first thing is, what kind of light would be used in an outdoor landscape?

My suggestion is to wait until 2.80 is released. Learning by 2.79 tutorials and doing them, I think will just add to the confusion. It’s okay to watch them to “get a feel” of what can be done, but I wouldn’t start memorizing or doing anything.

Key bindings and right mouse select issues are likely to drive you up the wall if you attempt to do stuff in 2.80 by 2.79 tutorials.

Normally when I have experimented with render engines, Twilight, Raylectron, Kerkythea, Etc I could start playing intuitively by just playing around

I get that mate and mentioned the complexity is the pay off. The good thing about that is it is a whole package and anything can be acieved once mastered. Blender has a very very high cieling:)

Typically a panoramic HDR environment texture by itself, or supplemented with a Sun lamp.

You can add a world texture in the Shader editor (remember to set it to world mode), and a Sun lamp can be just added to the scene at any location. If you then want to rotate the world texture, you need to use a combination of nodes like this:

Blender doesn’t come with any presets or sample textures of any sort, but for HDRIs, you can get some free ones at https://hdrihaven.com/. You can also make your own environment textures by rendering a Blender scene with a Panoramic camera. Or capture them from nature if you have the hardware.

Thanks, Piotr, the graphic is pure gold:+1: I have a collection of Hdri environments:)