Hello, Blenderbrains, have I got another lame question for you.

I’m trying to model a transformable staircase so that I could alter its height and angle quickly when necessary.

Some guesswork tells me it has to do with a correct use of ‘array’ modifier and ‘path’ curve. But that’s where I start being stupid, 'cause I also need all of the stairs to be pointing downward (-Z), which I repeatedly fail to achieve.

What is the correct approach to a problem?

Why do you need to use a path at all? What are you trying to achieve, beyond making the staircase’s angle and height adjustable? Are you also trying to get it to follow a curve? If so, you need to state that more clearly.

Normally, you can just use a single array without any path to do what you describe. The height and width of the object you’re using as a step will normally determine the final slope and length of the entire staircase. You can adjust further by using offsets on whatever axes you want to change the spacing of steps (i.e. to leave a gap between them).

Yep, I need quickly adjustable height/stairs count and angle for a staircase. And I’d also have railings’ angle adjustable as well with as little controls as possible.

As of array, yes, there’s only a need to set an Empty object for offset and move it when and where necessary. Doesn’t help much with railings, though.

Array modifier+ curve modifier will make the stairs go along the path of the curve. 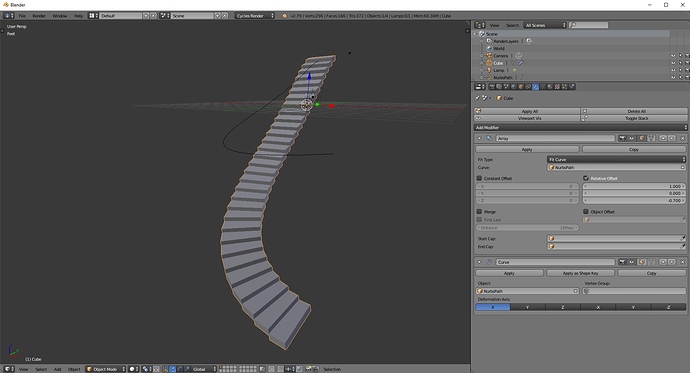 Stairs are pretty simple to throw together, so unless this is for some sort of module kit or addon, I don’t see the point of going to so much trouble. If it IS for a kit or addon, then you should think about using python to do it.

Well, It’s funny to go back to this topic 1,5 year later, but I guess I’ve figured how to do the thing, after all. Indeed you don’t actually need the path, any 2D curve would work, you just have to figure out the shape of the given flight of staircase. And it’s vertical property (steepness) can be governed by an Empty used for Object Offset in Array Modifier. Not exactly what I needed but at least it’s a working approach.

So the workflow is following:

I guess Empty can be parented to another curve as well, but it’s a different story.