Hello, my name is Eric and I have been playing around with blender for about a month or two now. I recently have decided to model a machine that I have at my job, it’s an extensive piece of machine with multiple components rotating at once on the same axis at different speeds.

So what I am trying to accomplish is to have a fixed transparent cutout over these layers, almost like a piece of pie cut out and being able to see the other layers movement behind it while it is in rotation. So the end result I am looking for is the model animated to spin, but to have that cutout show behind it stay in the same spot. I hope I am explaining this clearly. Here are a couple images of the project and the 3 layers.

Thank you in advance for your help!

Hi, I think it is a bit unclear what your question is. Maybe a picture of the machine at your work would help? 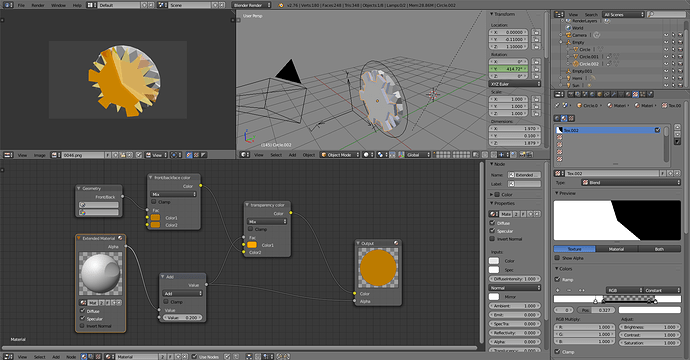 Yes JA12, that is exactly what I am looking for. I downloaded your provided project and tried to apply this concept on to mine but I have no idea where to start haha. I am going to play around with it for a while! Thank you so much!

The boolean modifier can also be used like this. Have it on the parts to create the cutaway, just don’t apply it to actually alter the mesh. Easier to animate where the cutaway is, have different shaped cutouts, etc. Only problem is there may be some limitations on how clean the result is. (Mesh being recalculated and triangulating, etc.)

Texture based method previously suggested may work better (in terms of a clean result), even if it’s not as easy to setup as boolean.

I have had nightmares with the boolean haha, I will give that a shot though.

An another note, JA12, I was able to get it to work on my project. Is there a way to do this in cycles render?