Trying to model this cat suitcase. It's harder than I thought 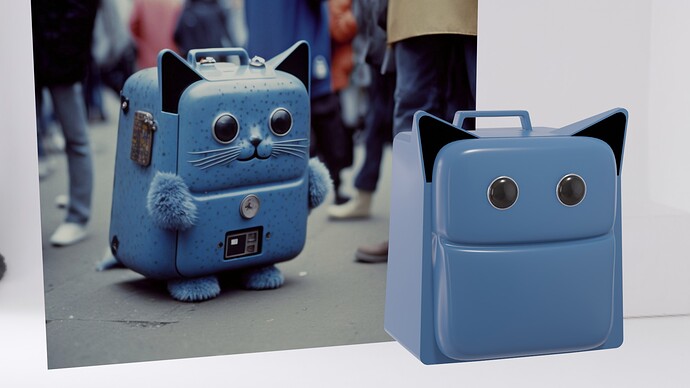 I thought I could model this cat suitcase in a few hours, but I was wrong.
It’s an A.I. image from https://www.facebook.com/TheStrangestFleaMarket
I thought it would fun to model it. Any recommendations on how to better model this thing?
Thanks. 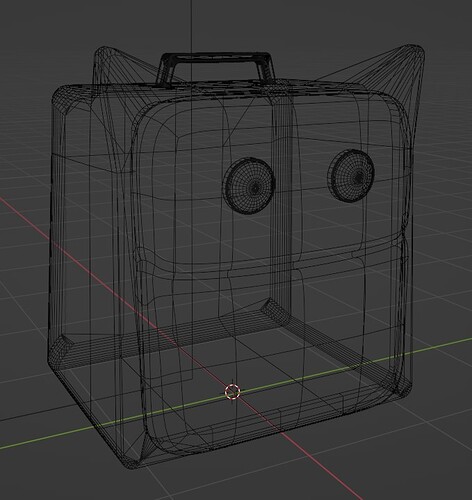 What am I doing wrong here, topology wise? Obviously there are triangles I’d have to eliminate.
I made the mistake of trying to model with the Subdivision Surface Modifier on, which gave me some bad results. I turned that off, and eliminated most of that, but now if I turn it back on, it’s terrible.

The case in the image is very rounded, I wasn’t able to get that shape right, but it’s hard to tell exactly what’s goin on there since it’s not really a real thing.

It would be easier to do the entire rounded shape before making the ears. You start by making a solid shape that has the correct roundness and bevels. It should roughly have the correct shape unsubdivided: subdivision is there to make surfaces smoother, not for massively modifying the silhouette of the object, that’s just asking for trouble.

I would make the front plate as a separate object from the main body.

Once the shape is complete, then you can start to think about extruding the ears. Also, notice how the ears’ outer corners are further back than their inner corners, so they join the body of the suitcase past the bevel. This means the ears have a diagonal in them.

subdivision is there to make surfaces smoother, not for massively modifying the silhouette of the object, that’s just asking for trouble.

Thanks! Yes, I was realizing that. I knew better, but forgot. I have modeled things that way in the past in Lightwave, and got away with it, but often there are verts and edges extremely close to each other, or pulled and overlapping.

I beveled the edges to get rounded corners. Should I not do that?

Also, notice how the ears’ outer corners are further back than their inner corners, so they join the body of the suitcase past the bevel. This means the ears have a diagonal in them.

I’m not sure I understand you correctly. The A.I. doesn’t always draw things physically accurate, sometimes even physically impossible, so I’m not sure how those ears are actually built. My interpretation is that the ear edges are flat as a plane, and there’s a “lip” that comes out to meet the side of the door. That’s how I started to build mine. I figure some liberties will need to be taken to make it practical. My door is separate. I think I need to go a few steps back and start over. I’m thinking the face and even middle indentation there should be done with a displacement map. I tried sculpting and my results were terrible.
The body of the case seems to be wider than the top, and also looks like the back is slanted. The bottom front looks more rounded, and doesn’t seem to consistent with the curve of the door, like more complicated than it really needs to be.

Thanks for the helpful suggestions.

Bevelling corners is fine, as long as it doesn’t make unworkable edge loops for subdivision later.

I believe the shape here is largely plausible, as long as the ears aren’t flat. Here is a quick mockup of the shape as I perceive it (don’t pay too much attention to the topology, this is a quick test for the shape). 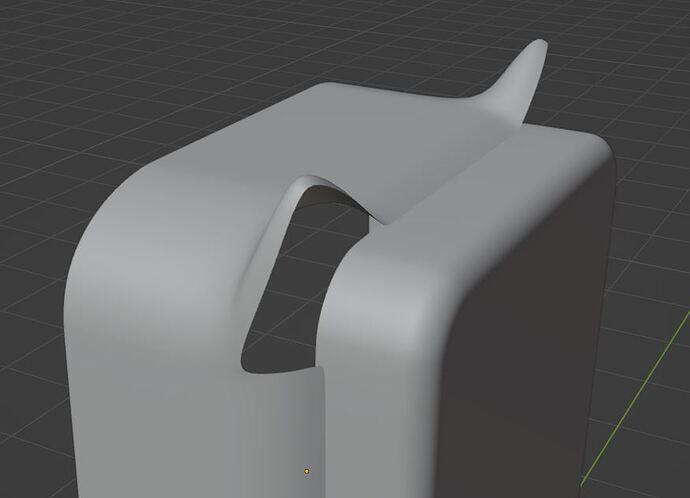 Here is the file:

On a complex shape like this, it might be easier to start with first making the shape through whatever means necessary, whitout caring for topology and then do a manual retopology to clean it aftwerwards.

Thanks for the help! I’ll take a look at that. That does look more like it.

Here is my take on it following as much as I see in the pix…of course, there are some impossible parts that would need to be revised ( you had a good beginning.) For example, the side under the ear…overlaps the door ( front part) and at the bottom curves around and ends up looking like a bulge on the bottom… just not logical

For example, the side under the ear…overlaps the door ( front part) and at the bottom curves around and ends up looking like a bulge on the bottom… just not logical

Yeah, that’s a problem. It looks like a photograph, but when you examine it, it’s not physically possible.
I was trying to figure out how those ears would work, and how the door would close. The black area can’t be a hole. I figured that it was a flat piece. I guess there could be detail you can’t see there, more like an actual cat’s ear. I was going to ignore that overlapping lip there. It doesn’t make much practical sense. I think the shape needs to be simplified a bit, to make it a practical suitcase or backpack or whatever it is.

Anyway, this was just for fun as an exercise. I thought I could do it quickly. I need to improve my skills. I’m getting rusty.

I agree!
The Door would work better if the Bodey Just matched up…or was just a bit larger and the door …like the area below the ear and the bottom as in your first picture…

The ears? Hmmm, I like the effect the side slot makes with the rest of the body, but it does make things far more complicated… I see it as an opening with some sort of Black Grill fitted to the space…and the door hinged at the bottom…if you ever tried to get a cat in a carrier, it would make sense. The raised area where the handle fits don’t make much sense as it also overlaps the door and the connection to the ears, the R-hand side is more interesting, but the L-hand is just weird…
But it is a fun exercise…and really makes you think!
Happy Blending!