Ok I get your point , I do appreciate your time is precious.
I have applied object transformations as requested.
Not sure what assign all to head means?

Thanks for that, i did have a play with it but the issues I am having in general
are also present with this.

The picture shows the grand purpose behind this, digital versions of my carp sculptures. 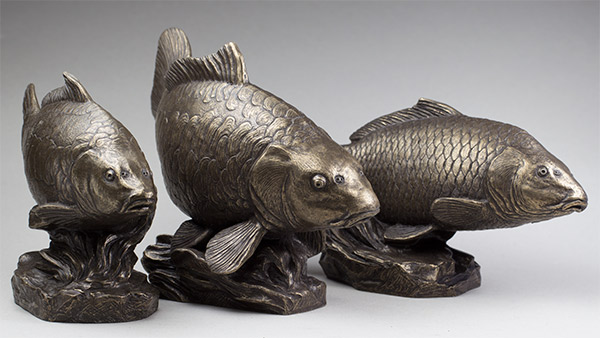 not me mark , I’m retired and have nothing but time , I was doing a lot of rigging and left blender to pursue game modeling in skyrim and like a dummy dumped all my stuff to make room on my drive ,but there was a free add-on a while back that would fill the bill for what your looking for will see if I can find it but it will let your fish swim.

Not sure what assign all to head means?

It means, select all your verts (in edit or weight paint mode), go to properties/object data/vertex group, select your head group from the list of vertex groups, make sure that the “weight” bar underneath says 1.0, and click the assign button right above that weight bar.

That would be FishSim. It really eases rigging and animating fish, using a modified version of the Rigify rig.

there was a version of jiggly armature also not sure if this is the right one still looking for the old post.
JiggleArmature-master.zip (88.3 KB)
also I was using 2.79b at the time and pretty sure it was a plugin.

pretty sure it was a plugin

the one I’m thinking of was being used in a snake model and animation with the side to side motion , I was thinking just shorten the bone chain, I was doing human models and some animal but was using the armature and jiggle bone for human movement,but I will keep looking.it might work to rotate the jiggle armature to a side to side orientation as the head run a short bone chain and use jiggle bones in the up and down orientation for the fins .

Those are beautiful sculptures, btw-- I almost missed it, thinking about something else.

I tried my hand at making a carp in Blender, but that was a long, long time ago. It wasn’t a terrible model. In hindsight, the rig I made for it was terrible. If I had to do it over again, I would probably do it with an armature->dynamic mesh deform, which would make it easier to follow a curve or do anything I wanted with it. Armature would just be for details like the fins, eyes, maybe a tail tweak, while the mesh deform would make the overall shape of the body.

will do thanks never know what might comein handy , most of my thing is human and four legged animals
in this case lion rigs for a Sky-rim project I’m working on .and agreed the fish sculptures are awesome .

ya use to use mesh deform to animate the anatomy of human females till better tools came along. girls look better when they jiggle , cant help with the fish model though would not know where to start.

Thanks they were made quite a few years ago too.
I also have an unusual hybrid mechanical fish piece that would also make a nice digital creation, quite happy to post a pic but don’t want to clutter up the place.
I have assigned the head had a go at doing a linear gradient but can keep it bone length.
Do i manually select vertices and add them to groups ?

I have assigned the head had a go at doing a linear gradient but can keep it bone length.

Right, you’ll just see it doing a gradient-- until you do the next group, and then normalize your weights.

So let’s just consider the first three bones. Everything’s just plain assigned to head to start out with. Then we draw a gradient (with an add brush) over our second bone. Now, we have a gradient on one side of that bone, right? But everything on the other side of it is just red. And if you look at the head bone, everything is red, there is no gradient.

Now, select your second bone/vertex group to make it active, and from search menu (or menu bar), normalize all vertex groups. If you look at the operator panel afterwards, you’ll see a “Lock active group” option, which is what you want (should be default)-- we’re locking our second bone’s group, and normalizing the head weights around it. Now, if you look again at head weights, you’ll see there’s a gradient-- the inverse of first bone’s gradient.

Does that make sense?

When i create a vertex group i selected a band of vertices and hit assign.
selected and viewed in weight paint I see a symmetrical band of colours
corresponding to the vertices i added to the group.
If I attempt to draw a gradient it has effect way outside the selection.
Hmm I feel like a man who has never set eyes on a gear wheel trying to make a Rolex here.

Other than the head, don’t try to just assign them.

(Unless you feel like playing, experimenting, in which case, do whatever you want

But then, learn about vertex mode ‘v’ in weight paint, which will let you specify vertices you want to paint on, and try using a gradient with “multiply”, weight 0.0 set in tool options.)

attached is a grab of the model after applying gradient to first bone/group
after the head, is this correct?
When i hit normalise all the head shows the inverse of this.
when i repeat on following groups the i just get the red section moving to the tail.
Just confused now. 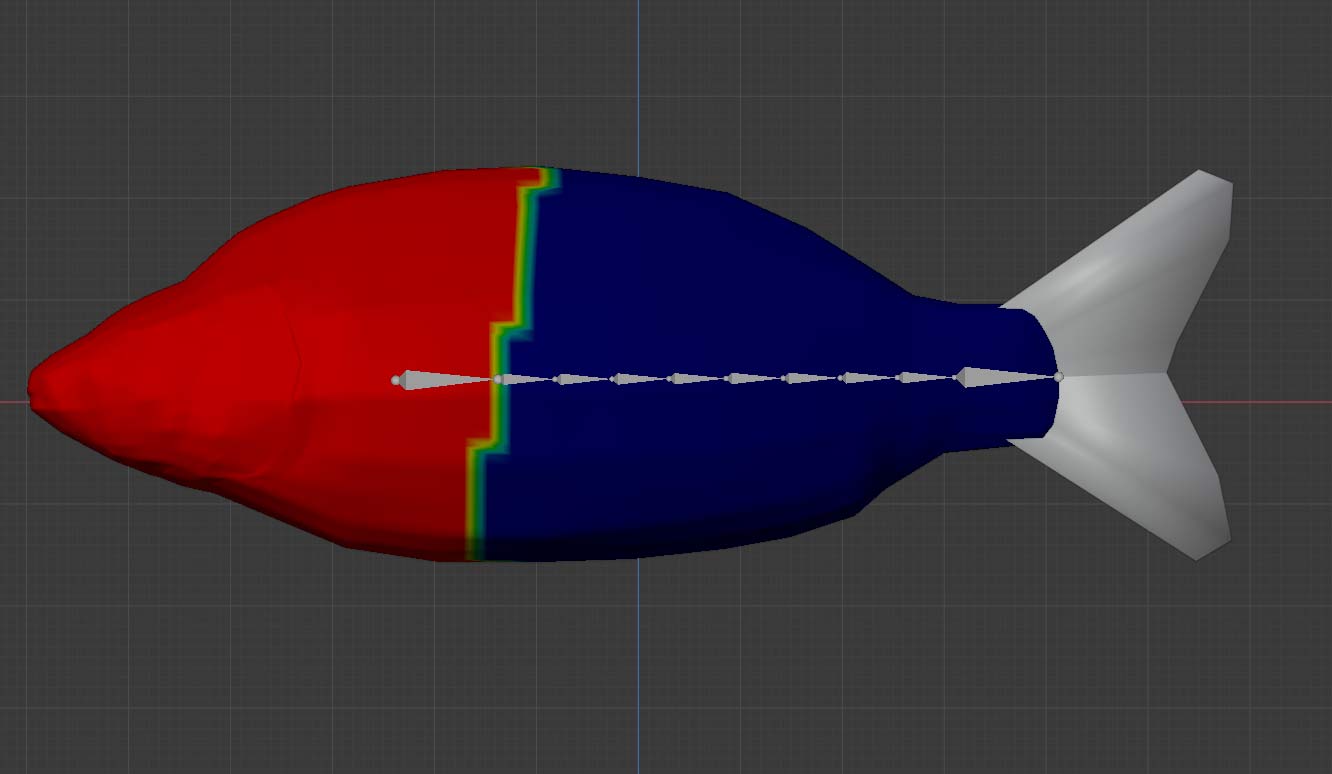 Umm, almost. Do your gradient in the other direction. You’re weighting from front to back, if you start with the head. So your head should be red for the head, and your tail should be red for as far back as you’ve gone.

Your gradients could stand to be a little wider as well (although really, you just don’t need so many bones).

Hi bandages
thanks for your response.
after doing this on bone 2 When i select the head the red is on the tail the blue the head.
You have tried to be so helpful and i feel a bad student.
The whole thing has made be feel dense and irritable to be honest.
I had ago using z-spheres and had smooth posable tail pretty quick so will
follow that up for now.
I don’t want to give up on blender rigging just want to get the model done first.

Then do your gradients in the opposite direction of what you were doing. Red means 1.0, blue means 0.0. 1.0 means it moves heavily with that bone, 0.0 means it doesn’t move with that bone at all.

It’s just complicated. There’s theory to it, but the best way to realize the theory is to struggle through the practice.

My goal, in most of my explanations, is to help people develop what they need not just to solve their immediate problem, but to help them for future problems, so sometimes I encourage people to do things the hard way, when I think that’s what will help their understanding. For sure, if you’ve found a different way that works for you, do that!